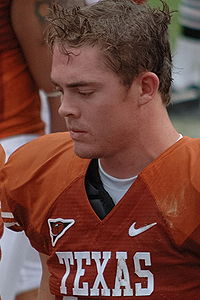 Texas quarterback Colt McCoy appears to be annoyed after he is sent to the sidelines.

Annoyance is an unpleasant mental state that is characterized by such effects as irritation and distraction from one's conscious thinking. It can lead to emotions such as frustration and anger. The property of being easily annoyed is called petulance, and something which annoys is called a nuisance.

Various reasons exist for why one finds particular stimuli annoying. Measurement of annoyance is highly subjective. As an attempt at measurement, psychological studies on annoyance often rely on their subjects' own ratings of levels of annoyance on a scale. Many stimuli that one is at first neutral to, or even finds pleasant, can turn into annoyances from repeated continued exposure. One can often encounter this phenomenon with such media as popular music, memes, commercials, and advertising jingles, which by their very nature are continually repeated over a period of weeks or months.

A study published in the International Journal of Conflict Management found that one's response to an annoyance, at least when the perceived cause is another person, escalate to more extreme levels as they go unresolved.[1] It also found that one was more likely to blame the party who was causing the annoyance in the study, rather than one's self, for the annoyance as it escalated.

Psychological warfare can involve creating annoyances to distract and wear down the resistance of the target. For example, in 1993 the FBI played music "specifically selected for its irritation ability" on loudspeakers outside the Branch Davidian church in Waco, Texas in an attempt to bring about the surrender of David Koresh and his followers.[2]

Annoyances are used to measure how well a software program conforms to (or competes against) user expectations about how a particular feature or package should work. Individual annoyances are routinely archived and catalogued by users and reviewers. Such archives often include "annoyance busters" or "workarounds" that can be used to resolve or ameliorate the irritating effects. For top-selling software titles, archives of annoyances and workarounds are often published.