Burlington Coat Factory Warehouse Corporation is a national department store retailer focusing on clothing and shoes, with over 450 stores in 45 states and Puerto Rico.(as of 2010). In 2006, it was acquired by Bain Capital, LLC in a take-private transaction.[1] The company's corporate headquarters are located in Burlington Township, New Jersey.[2][3][4][5] 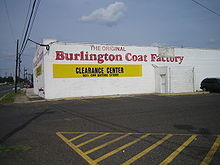 The company was founded in 1924 as "Burlington Coat Factory Warehouse Corporation", a wholesaler of ladies' coats and outerwear. The modern company was formed in 1972 when Monroe Milstein and his wife, Henrietta Milstein, purchased a warehouse in Burlington, New Jersey, and started selling coats and outerwear. Monroe had already been a wholesaler of Ladies coats and suits in New York City for many years and his experience in the field of fashion and his deep understanding of the market and what the customers wanted guided his success. The company started gradually adding apparel, including suits, shoes, and accessories, and though the direct efforts of Henrietta branched out to include baby items. Current fashions in women's and men's, and Baby clothing and items including linens, were offered at considerable discount to some of its competition. MJM Designer Shoes and Cohoes Fashions are separate stores in the Burlington Coat Factory family. 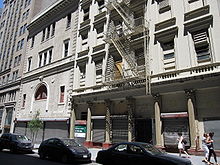 The old Burlington Coat Factory on 45 Park Place in New York, now the subject of an unrelated controversy

In 2001, in the 9/11 attacks after hijacked Flight 175 penetrated through a tower of The World Trade Center, part of the plane's landing gear and fuselage came out the north side of the tower and crashed through the roof and two of the floors of the Burlington Coat Factory at 45–47 Park Place, between West Broadway and Church Street, (600 feet (180 meters)) north of the former World Trade Center. The plane parts destroyed three floor beams, and severely compromised the building's internal structure. Nine years later the building was part of a national controversy, as efforts to build a Muslim center and mosque at the site as the "Cordoba House" sparked a national controversy.[6][7][8][9][10][11][12][13][14]

In 2011, the company reported to open 20 new stores this year and New flagship store in Bayamon, Puerto Rico.

Under investigation from animal welfare organization Humane Society of the United States, Burlington Coat Factory has been accused of labeling real fur products as "faux fur". The company agreed to pull the false advertisements after an undercover investigation revealed "faux fur" as actually made from the pelts of animals killed in China.[3] Burlington Coat Factory's coats have also been found to contain dog pelts.[17][18][19]

In 2006, after changing ownership, the company for the first time began offering cash and credit card refunds. Prior to this policy change, the only refunds were in the form of store credit, regardless of whether the customer had a receipt.