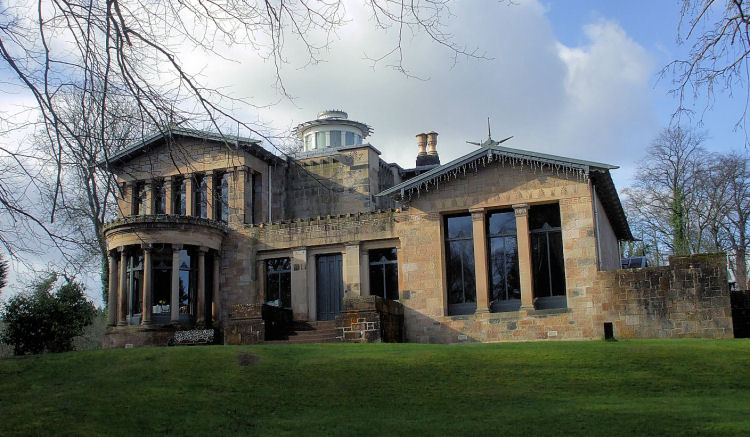 caption=
name=Holmwood House
location_town=
location_country=Scotland
architect=
client=James Couper
construction_start_date=1857
completion_date=1858
cost=£3,682
structural_system=masonry
style=Greek Revival| Holmwood House is the finest and most elaborate residential villa designed by Scottish .It is also rare in retaining much of its original interior decor, and being open to the public.The villa is located at 61-63 Netherlee Road, in the southern suburbs of .

Holmwood is considered to be immensely influential by several architectural historians, because the design as published in 's "Villa and Cottage Architecture" in 1868 may have influenced and other proto-modernist architects.

Holmwood was constructed for James Couper, a paper manufacturer in 1857-1858. Couper owned the Millholm paper mill in the valley of the immediately below the villa. The principal rooms of Holmwood were orientated towards the view of Cathcart Castle (demolished in 1980). The cost of the house was £2,608:4:11d; the stable, green house & outbuildings cost a further £1,009:19:6d; and the gates an additional £75:2:0d

The decoration was designed by Thomson and executed by . The most notable survival is in the dining room which has a frieze of panels enlarged from 's illustrations of 's . The sculpture on the hall chimneypiece was by .

Holmwood was altered in the 1920s by the owner, James Gray. After it was occupied by the who obliterated much of the original decoration with plain paint. The gardener's cottage demolished 1970s as the grounds and those of an adjacent villas were used for a Catholic primary school.

The nuns put the property on the market in the early 1990s, and there was a danger that the grounds would be developed for housing, destroying the setting of the villa. Following an appeal, Holmwood was acquired by the in 1994 with the support of £1.5million from the . It was restored by architects in 1997-1998. Their work included undoing the 1920s alterations and rebuilding the connecting wall.