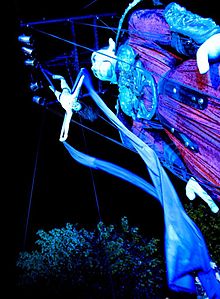 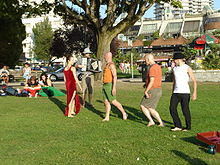 A troupe of street theatre performers by the beach in Vancouver, British Columbia, Canada. 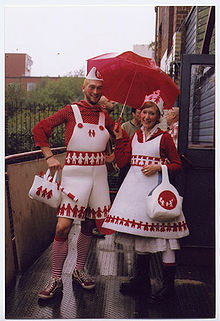 Street theatre is a form of theatrical performance and presentation in outdoor public spaces without a specific paying audience. These spaces can be anywhere, including shopping centres, car parks, recreational reserves and street corners. They are especially seen in outdoor spaces where there are large numbers of people. The actors who perform street theatre range from buskers to organised theatre companies or groups that want to experiment with performance spaces, or to promote their mainstream work.

Sometimes performers are commissioned, especially for street festivals, children's shows or parades, but more often street theatre performers are unpaid or gather some income through the dropping of a coin in a hat by the audience.

The logistics of doing street theatre necessitate simple costumes and props, and generally there is little or no amplification of sound, with actors depending on their natural vocal and physical ability. This issue with sound has meant that physical theatre, including dance, mime and slapstick, is a very popular genre in an outdoor setting. The performances need to be highly visible, loud and simple to follow in order to attract a crowd.

Street theatre should be distinguished from other more formal outdoor theatrical performances, such as performances in a park or garden, where there is a discrete space set aside (or roped off) and a ticketed audience.

In some cases, street theatre performers have to get a licence or specific permission through local or state governments in order to perform. Many performers travel internationally[1] to certain locations of note.

Street theatre is arguably the oldest form of theatre in existence: most mainstream entertainment mediums can be traced back to origins in street performing, including religious passion plays and many other forms. More recently performers who, a hundred years ago, would have made their living working in variety theatres, music halls and in vaudeville, now often perform professionally in the many well-known street performance areas throughout the world. Notable performers that began their careers as street theater performers include Robin Williams,[2] David Bowie, Jewel and Harry Anderson.

One of the most interesting points about modern street theatre is its unique sociopolitical place. People who might not have ever been to, or been able to afford to go to, the "legitimate" theatre can watch a street show. By virtue of where the shows take place, their audience is made up of anyone and everyone who wants to watch. If an audience member can not afford it, then it is free.

Reasons for staging work on the street

Different practitioners will have different motivations for using the street as a space for performance. For some it is simply because their work is not accepted by the mainstream channels, and for others it is because they have taken a clear decision to do so. This may be socially, politically and/or artistically motivated.

New performers such as multimedia artist Caeser Pink and his group of performers known as The Imperial Orgy used performance art for social activism as in a piece titled Our Daily Bread[3] that brought performers onto the streets of the New York's financial district to ceremoniously lay loaves of Wonder Bread along the sidewalks, each with advertisement from Satan offering to buy people's souls in exchange for all the material possessions one can obtain by dedicating their lives to working a corporate job that leaves little time for spirituality. The performance caused an uproar when police were called out and bomb sniffing dogs were brought in to inspect the loaves of bread for explosives.

A paying "theatre-going" public, is considered by many as to not be representative of the public to whom a group or practitioner is trying to communicate, and so performing to literally, the man on the street, may be considered a more democratic form of dissemination.

Many contemporary street theatre practitioners have extensively studied pre-existing street and popular theatre traditions, such as Carnival, commedia dell'arte etc. and wish to present them in a situation close to their original context.

Whatever the reason for choosing the street, the street is a place with a different set of possibilities than the conventional theatre space. Sue Gill of Welfare State International argues that a street theatre performance is not a lesser form than an indoor performance, nor is it simply taking what you do on stage and placing it outdoors, but a form with an energy and an integrity of its own.[4]

Many companies are politically motivated and use street theatre to combine performance with protest. This has occurred through the Guerrilla theatre of San Francisco Mime Troupe,[5] The Living Theatre, the carnivalesque parades of Bread and Puppet Theatre, and the work of Ashesh Malla and the Sarwanam Theatre Group of Nepal.

A character-based street theatre which developed in the 1960s and 1970's was developed by groups like Lumiere and Son, John Bull Puncture Repair Kit, Exploded Eye and Natural Theatre Company. The performances are unannounced and use immaculately turned out characters who act out a pre-arranged scenario, looking beautiful or surreal or simply just involving passers by in conversation. They did not seek to trick in a Candid Camera way, but rather invited the audience to pretend along with them. No amount of planning or rehearsal can dictate what will happen.

A typical example would be Natural Theatre's Pink Suitcase scenario. A number of smartly dressed people carrying bright pink suitcases enter a set of streets or buildings. They search for and miss their companions. In their search they get on buses, hail cabs, end up in shop windows etc. By the time they meet up at a pre-arranged spot(with the help of passers-by) perceptions of the area have changed and shopping has ceased for at least a few moments. The humour is universal and this piece has been seen in nearly seventy countries. It is usually performed by four or five actors, but has been done with twenty five.