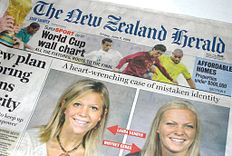 The New Zealand Herald is a daily broadsheet newspaper published in Auckland, New Zealand, owned by APN News & Media. It has the largest newspaper circulation in New Zealand, peaking at over 200,000 copies in 2006, declining to 187,129 by June 2008.[2] Despite the name, its main circulation area is the Auckland region. It is also delivered to much of the north of the North Island including Northland, Waikato and King Country.[3]

The Herald was founded by William Chisholm Wilson and published its first issue on 13 November 1863. In 1876 it was merged with the newspaper The Southern Cross, owned by Alfred Horton, which was first published in 1843.

Gordon Minhinnick was a staff cartoonist from the 1930s until his retirement in the 1980s. Laurence Clark was the daily political cartoonist from 1987 to 1996, and continued to publish cartoons weekly in the Herald until 2000.[4]

The Herald is traditionally a staid centre-right newspaper, and was given the nickname "Granny Herald" into the 1990s. This changed with the acquisition of the paper by Independent News & Media in 1996, and today, despite remaining free enterprise oriented on economic matters such as trade and foreign investment, the Herald is generally editorially progressive on international geopolitics, diplomacy, and military matters, printing material from British newspapers such as The Independent and The Observer but more recently, conservative newspapers such as the Daily Telegraph.[5] Some ascribe the Herald's stance on the Middle East as supportive of Israel, seen most clearly in its 2003 censorship and dismissal of cartoonist Malcolm Evans following his submission of cartoons critical of Israel.[6] On the other hand, Robert Fisk and Gwynne Dyer, commentators critical of Israel, are also regular commentators in the paper.[citation needed]

On domestic matters, editorial opinion is centre-right, usually supporting socially conservative values and self-reliance over social welfare, government fiscal restraint, and reducing the government's role in the New Zealand economy. In 2007, an editorial strongly disapproved of some legislation introduced by the Labour-led government, the Electoral Finance Act, to the point of overtly campaigning against the legislation.[7]

A compact-sized Sunday edition, the Herald on Sunday, was first published on 3 October 2004 under the editorship of Suzanne Chetwin and then, for five years, by Shayne Currie. It won Newspaper of the Year for the calendar years 2007 and 2009 and is New Zealand's second-highest-circulating weekly newspaper after the The Sunday Star-Times.

The Herald on Sunday has the fastest-growing circulation and readership among major New Zealand newspapers.[8] It is now edited by Bryce Johns. As of March 2011[update] the newspaper had an estimated readership of 380,000 and circulation of roughly 100,000.

In March 2007, APN NZ announced it was considering a plan to outsource the bulk of the Herald's copy editing to an Australian-owned company, Pagemasters. APN confirmed the outsourcing decision to affected staff on 19 April 2007.

The online news service nzherald.co.nz, originally called Herald Online, was established in 1998 and attracts over 2.1 million users per month.[9] It was redesigned in late 2006.