California Memorial Stadium is an outdoor football stadium on the campus of the University of California in Berkeley. Commonly known as Memorial Stadium, it is the home field for the University of California Golden Bears of the Pacific-12 Conference. The venue opened in 1923 and seated 71,799 fans until the 2010 football season, making it northern California's largest football stadium in terms of seating capacity,[2] however, the stadium's capacity is expected to drop to around 63,000 seats after the renovation has been completed in 2012 so it will no longer hold that distinction. It will still be the largest football-only stadium in Northern California because Overstock.com Coliseum and Candlestick Park are both multi-purpose facilities. The stadium was listed in the National Register of Historic Places on November 27, 2006.[3]

Memorial Stadium was funded from public contributions, as a memorial to Californians who lost their lives in World War I (1917–18). The chair of the architectural committee was John Galen Howard, the university's chief architect, and his influence is evident in the stadium's neoclassical motif. In addition to its unique architecture, the stadium's position at the foot of the Berkeley hills provides top row spectators with panoramic views of San Francisco Bay and west side viewers with views of the Berkeley Hills and Strawberry Canyon. This has earned it a reputation as one of the most scenic venues in college football.

Memorial Stadium does not have a running track, so the stands descend right down to the football field (the lowest central seating views on the west side can be blocked by the standing visiting team reserve members). The playing field runs NW-SE, at an elevation of 410 feet (125 m) above sea level. [1]

Traditionally, during all football games and especially during the Big Game against Stanford, the hill overlooking the eastern side of Memorial Stadium attracts spectators hoping to watch a game for free, earning the nickname "Tightwad Hill."

Originally a natural grass field, AstroTurf was installed in Memorial Stadium in 1981 and remained for 14 seasons. Natural grass returned for the 1995 season, until the 2003 installation of Momentum Turf, a next-generation infilled artificial turf, similar to FieldTurf. [2] 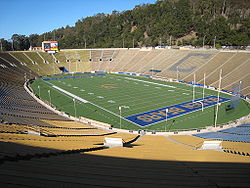 The Momentum Turf surface allows for minimal maintenance and increased utilization of the stadium, for football practices and other sports, on the space-limited UC-Berkeley campus. After returning to natural turf in 1995, varsity football practices were held at Witter Rugby Field, saving the stadium's grass field for game days only. Memorial Stadium's field is also marked for international soccer, but this allows little reserve room beyond the official lines. 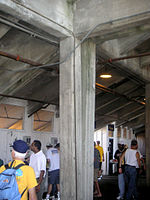 The Hayward Fault passes directly under the playing field of Memorial (nearly from goal post to goal post), [3] where right-lateral strike-slip motion is shifting the northeast half of the building to the southwest at a rate of 1.2 mm/yr. Expansion joints have been placed in the walls of the stadium to maintain the integrity of the building. A 1998 seismic safety study at the Berkeley campus gave the stadium a "poor" rating (meaning that the building represents an "appreciable life hazard" in an earthquake), and estimated the cost of making the structure safe at $14 million.

In February 2005, Chancellor Robert Birgeneau announced plans to renovate Memorial Stadium, improving the existing facilities and creating a safer environment for the fans as well as the people that work at the stadium. Currently many of the university sports teams use offices, locker rooms, and weight rooms in the stadium on a daily basis. Phase I consists of building the 142,000-square-foot (13,200 m2) Student-Athlete High Performance Center next to the west wall of the stadium. Football and 12 of Cal's Olympic sports teams will move into new locker rooms, offices and meeting rooms at the center. Training, sports medicine facilities, and an academic center in the SAHPC will be available to the campus' 450 student-athletes year round.[4] The roof of the athletic center will act as a pedestrian plaza on gamedays. Phase I of the renovations was scheduled to begin the spring and summer of 2006 but was delayed by a court injunction due to three lawsuits against the project. A small group of tree-sitters occupied the oak grove on the west side of the stadium beginning on the "Big Game" day in December 2006. In September 2008 the court injunction was lifted, the protesters came down, and construction of the athletic center began. The SAHPC is expected to open in the fall of 2011.

On January 19, 2010 the UC Board of Regents approved the retrofit and renovation of California Memorial Stadium. The $321 million project commenced in June 2010 and is expected to be completed in time for the 2012 season. The project will renovate the west side and both end zones. A surface rupture block will be placed in each end zone where the fault line passes through the stadium. These blocks can move independently from the rest of the stadium and will be built on top of three feet of sand and plastic sheets. Expansion joints will be placed between the surface rupture blocks and the rest of the stadium.[5] The west side of the stadium will be demolished and rebuilt except for the outer wall. Club levels, a new press box, bathrooms and concession stands will be added. The Bears will play at AT&T Park in San Francisco for the 2011 season while the renovations are being made.[6]

The NFL's Oakland Raiders played their second game of the 1973 regular season at Memorial Stadium. The game against the defending Super Bowl champion Miami Dolphins was moved from the Raiders' regular home, the Oakland Coliseum, because of a scheduling conflict with the Oakland Athletics, who hosted the Minnesota Twins at the Coliseum the following night. The Raiders ended the Dolphins' NFL record 18-game winning streak with a 12-7 victory on four field goals by 45-year-old George Blanda on September 23. [4]