Major characters in the works of Madeleine L'Engle

Major characters in the works of Madeleine L'Engle

Madeleine L'Engle, an American novelist, diarist and poet, produced over twenty novels, beginning with The Small Rain (1945), and continuing into the 1990s with A Live Coal in the Sea (1996).[1] Many of her fictional characters appeared in more than one novel, sometimes in more than one series of novels. Other major characters are the protagonists of a single title. This article provides information about L'Engle's most notable characters.

In a family tree chart first published inside the front cover of Many Waters (1986, ISBN 0-374-34796-4), L'Engle divided her major characters into categories she called "chronos" and "kairos", two Greek terms for different concepts of time. The stories of the Austin family take place in a chronos environment, which L'Engle defined as "ordinary, wrist-watch, alarm-clock time."[2]. These are presented in a primarily realistic framework, though occasionally with elements that might be regarded as science fiction. Kairos, the framework in which the stories of the Murry and O'Keefe families take place, was defined as "real time, pure numbers with no measurement", and often includes such elements as time travel, fantasy and religious content in a struggle between good and evil. A third category of characters, called by L'Engle "those who cross and connect", link the chronos and kairos stories in a latticework of appearances in multiple series of books, ultimately placing nearly every L'Engle character in the same fictional universe.

Although L'Engle's early protagonists (including Katherine Forrester, Philippa Hunter and Camilla Dickinson) tend to be, like L'Engle, an only child, later ones are often part of a large family, possibly in reaction to L'Engle's own lonely childhood.[1] Thus, Meg Murry and Vicky Austin each have three siblings, and Polly O'Keefe has six brothers and sisters. Most of her heroines are artists, such as a pianist, a painter and a poet; but Meg Murry O'Keefe is a mathematician, Camilla is an astronomer and Polly O'Keefe's vocation is undetermined. L'Engle's most important male characters (John Austin, Adam Eddington, Calvin O'Keefe and others) tend to gravitate toward science, or more specifically medicine (Charles Bejart, Dennys Murry, etc.). However, some are artists, actors, composers, or members of the clergy. Music is part of the lives of many of the characters, recreationally if not professionally. For example, the O'Keefes sing together in the evening, Victoria Eaton Austin retired from a brief singing career but frequently plays classical music recordings, and several members of the Davidson family play musical instruments.

L'Engle's young heroines are sometimes compared to the author herself as a teenager, with some of the protagonists experiencing fictionalized versions of settings and incidents from L'Engle's youth. For example, Flip Hunter and Katherine Forrester both attend a Swiss boarding school, as did L'Engle. However, in a 1963 article, L'Engle's husband, Hugh Franklin, professed to see the adult version of the author more clearly in the protagonists' mothers, Mrs. Murry (Dr. Kate Murry) and Mrs. Austin.[3] The only characters acknowledged by L'Engle as being directly based on a real person were Rob Austin, who was based in her son, Bion Franklin; Canon Tallis, who was based on her spiritual advisor, Episcopal Canon Edward Nason West; and Bishop Nason Colubra, based on David Somerville, a retired archbishop of Vancouver.[1] 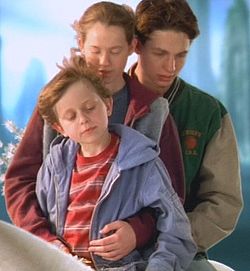 David Dorfman as Charles Wallace Murry, Katie Stuart as Meg Murry and Gregory Smith as Calvin O'Keefe in the television adaptation of A Wrinkle in Time.