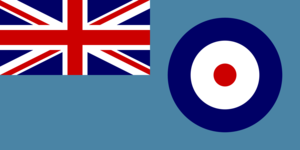 RAF Honington Airport codes|BEQ|EGXH is a Royal Air Force station 6 miles south of near in , . Although used as a station during , RAF Honington is now the depot and home to the .

Construction of Honington airfield began in 1935, and the facility was opened on . Squadrons of RAF Bomber Command using the airfield prior to were:

IX Squadron flew the first RAF bombing raid of World War II on flying a mission against the in the Baltic resulting in the loss of two Wellingtons. The squadron lost 79 Wellingtons flying from Honington before moving to .

In July 1940, formed at Honnington with Wellingtons, later moving to in November 1940.

The made several attacks on the airfield one of which killed about twenty airmen who were crossing the old parade ground on their way to tea. Another bomb demolished part of Barrack Block 76, which has since been rebuilt sometime between 1993 and 1996.

In 1941, a was shot down by ground fire from Honington. The aircraft crashed at the east end of D Hangar.

Then, in May of that year, a Wellington returning from a night trip attempted to land at Honington with its wheels retracted. It skidded to one side and crashed into the main bomb dump where it burst into flames. Group Captain J. A. Gray and Squadron Leader J. A. McCarthy, the station , were the first on the scene of the crash. Both entered the burning aircraft in an attempt to rescue the crew who were trapped and, between them, two crew-members were saved. For this gallantry, both officers were awarded the .

In June 1942 the airfield was transferred to the USAAF and was upgraded to a Class A Bomber base. In September, the set up an Air Depot to service and repair B-17s, became the 1st Strategic Air Depot. Built to the west of the main airfield it was called Troston, specialising in B-17 models and supporting the 3d Bomb Division located in the area. Badly-damaged Fortresses were often instructed to crash land at Honington on return from operations, particularly if their landing gear could not be lowered, as this avoided the necessity to dismantle and transport the aircraft from its home base for repair.

Besides the air depot, Honington also housed an operational fighter unit when the 364th Fighter Group took up residence at Honington in February 1944, arriving from Santa Maria AAF . The group was under the command of the 67th Fighter Wing of the . Aircraft of the 356th were identified by a blue/white stripe pattern around their cowlings.

The group consisted of the following squadrons:

The 364th FG flew escort, dive-bombing, strafing, and patrol missions in , , the , and . At first the group operated primarily as escort for B-17/ heavy bombers.

The group patrolled the during the Normandy invasion in June 1944, and, while continuing escort operations, supported ground forces in France after the invasion by strafing and bombing locomotives, marshalling yards, bridges, barges, and other targets.

Converted from 's to 's in the summer of 1944 and from then until the end of the war flew many long-range escort missions heavy bombers that attacked oil refineries, industries, and other strategic objectives at , , , , , and elsewhere. The 364th received a for an escort mission on 1944 when the group dispersed a large force of German fighters that attacked the bomber formation the group was escorting on a raid to .

The 364th also flew air-sea rescue missions, engaged in patrol activities, and continued to support ground forces as the battle line moved through France and into Germany. Took part in the effort to invade the Netherlands by air, September 1944; the , Dec 1944-Jan 1945; and the assault across the Rhine, March 1945.

Although the last mission by the 364th took place on , the group did not depart until November, returning to for deactivation. Even then, Honington remained the lone Eighth Air Force outpost in the UK becoming Fighter Command HQ on .

Honington was the last USAAF station to be returned to the RAF. By the beginning of 1946, the airfield remained the only active station of all the 122 which had been utilized by the Eighth Air Force and a fitting ceremony was planned to mark its closure and official handing back to the Royal Air Force. On , Brigadier General Emil Kiel the Eighth Fighter Command commander. was present to hand over the keys of the station to Air Marshal Sir James Robb, AOC . An RAF band played "" as the were lowered for the to be hoisted in its place.

With the departure of the USAAF in February 1946, Honington airfield reverted to the RAF, and became a major servicing centre for aircraft. During the , Honington played a tremendous part in keeping the aircraft of Transport Command flying. In 1949 the station reverted to Bomber Command.

From 1950 to 1956. RAF Honington housed No. 94 Armament Maintenance Unit for bomb storage. The airfield was upgraded during this time to include a 9,000 ft concrete runway.

Also in 1956, Honington became one of the main Force bases maintaining three squadrons, Nos, 7, 90 and 199 and later two Squadrons, No. 55 and No. 57. Additional facilities were constructed including a large E-W runway. These squadrons were moved out in 1965 and the airfield was placed in a reserve status.

In 1968 the airfield was selected to become the home of the RAF's UK-based Hawker Siddeley (Blackburn) Buccaneer bomber. The first aircraft arrived in November 1969 and deliveries continued throughout the early 70s. Nos 12, 15 and 16 squadrons formed there, with 15 and 16 squadrons moving to in West Germany in 1971. Also No 237 OCU () formed to provide the training squadron. No 208 squadron formed in 1974. The Buccaneers operated from Honington until the 80s when they relocated to in Scotland. The last aircraft (of the Tornado Weapons Conversion Unit) based at Honington left in 1994. The base is now the depot and home to the .