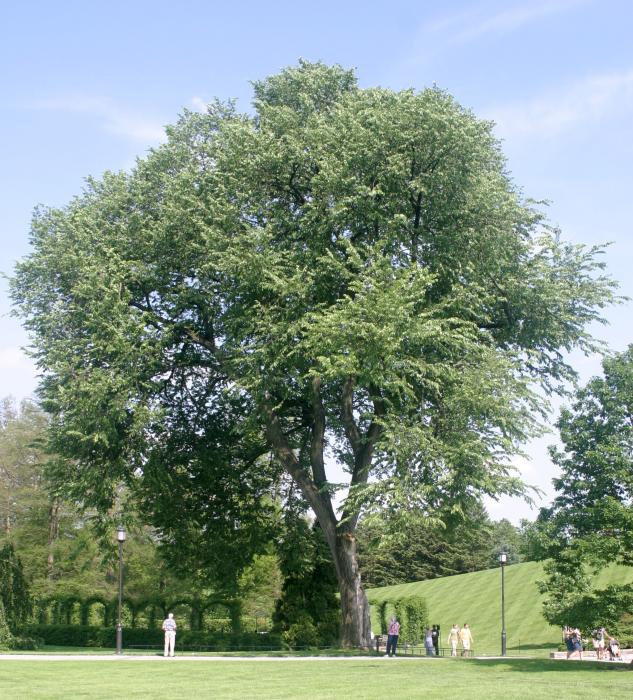 "Ulmus americana", generally known as the American Elm or, less commonly, as the White Elm or Water Elm, is a species native to eastern , occurring from west as far as , from northern at the top of its range, south to and central . It is an extremely hardy tree that can withstand winter temperatures as low as −42 °C (−44 °F). Trees in areas unaffected by Dutch elm disease can live for several hundred years. A prime example of the species was the Sauble Elm [http://www.flyingsquirrels.com/sauble_elm/] , which grew in , , to a height of 43 m (140 ft), with a d.b.h of 196 cm (6.43 ft) before succumbing to Dutch elm disease. Felled in , a tree-ring count established that it had germinated in .

The American Elm is a , which, before the advent of Dutch elm disease, commonly grew to > 30 m (100 ft) tall with a trunk > 1.2 m (4 ft) d.b.h. The crown forms a high, spreading canopy with open air space beneath. The leaves are alternate, 7–20 cm long, with double-serrate margins and an oblique base. The tree is , having s, i.e. with both male and female parts, and is therefore capable of self-pollination. The are small, purple-brown, and, being wind-pollinated, are ; they emerge in early spring before the leaves. The is a flat samara 2 cm long and 1.5 cm broad, with a circular wing surrounding the single 4–5 mm . As in the closely related , "U. laevis", the flowers and seeds are borne on 1–3 cm long stems. American Elm is wholly insensitive to daylight length (), and will continue to grow well into autumn until injured by frost

In years past, the American Elm was used widely as a shade tree and as a street tree, because of its graceful, arching, vase-like growth form and its tolerance of most stress factors

Introductions across the rarely prospered, even before the outbreak of . Introduced to the in , it was noted that the foliage of the American Elm was far more susceptible to insect damage than native elms

The American Elm occurs naturally in an assortment of conditions, most notably on bottomlands and floodplains, although it also can thrive in well-drained soils. On more elevated terrain, as in the , it often prefers to grow along streams. In the , it is a major member of four cover types: -American Elm-; -American Elm; -American Elm-; and Sycamore-Sweetgum-American Elm. The first two of these types also occur in . [http://www.na.fs.fed.us/spfo/pubs/silvics_manual/Volume_2/ulmus/americana.htm] Some hilltops near Témiscaming, , have a -Ironwood-American Elm cover type

DED is an introduced fungal which has ravaged the American Elm, causing catastrophic die-offs in cities across the range. It has been estimated that only approximately 1 in 100,000 American elm trees is DED-tolerant, most known survivors simply having escaped exposure to the disease [http://www.ars.usda.gov/is/AR/archive/jul96/elms0796.htm] . However, in some areas still not populated by the Dutch Elm disease-carrying , the American Elm continues to thrive, notably in , most of and .

The American Elm is particularly susceptible to disease because the period of infection often coincides with the period, approximately 30 days, of rapid terminal growth when new springwood vessels are fully functional. Spores introduced outside of this period remain largely static within the and are thus relatively ineffective

A fair number of mostly small to medium-sized American Elms survive nowadays in woodlands, suburban areas, and occasionally cities, where most often the survivors had been relatively isolated from other elms and thus spared a severe exposure to the fungus. For example, in and in

The American Elm's biology in some ways has helped to spare it from obliteration by the Dutch elm disease, in contrast to what happened to the with the chestnut blight. The elm's seeds are largely wind-dispersed, and the tree grows quickly and begins bearing seeds at a young age. It grows well along roads or railroad tracks, and in abandoned lots and other disturbed areas, where it is highly tolerant of most stress factors. Elms have been able to survive and to reproduce in areas where the disease had eliminated old trees, although most of these young elms eventually succumb to the disease at a relatively young age. There is some reason to hope that these elms will preserve the genetic diversity of the original population, and that they eventually will hybridize with DED-resistant varieties that are being developed or that occur naturally.

Some cities such as , had used mostly American elms in planting its city streets and had had some of the finest shaded residential streets in the nation, until the disease almost obliterated these plantings in the late 1960s and early 1970s. Many cities in the United States still have some surviving American elms, but generally this species requires frequent attention to check for elm bark beetles and DED infection. (The often checks on the hundreds of elm trees under its care in the , area for signs of illness.)

Fungicidal injections can be administered by a qualified to valuable American elms, to prevent the trees' becoming infected. Such injections generally are effective as a preventive measure for up to three years when performed before any symptoms have appeared, but they may not be so effective as a treatment once the disease is visibly present.

Numerous cultivars have been raised, originally for their aesthetic merit but more recently for their resistance to Dutch elm disease

The total number of named cultivars is circa 45, at least 18 of which have probably been lost to cultivation as a consequence of Dutch elm disease or other factors:

Hybrid cultivars are rare, and those that survive tend to be regarded with taxonomic suspicion. Two allegedly successful hybridizations were: 'Hamburg', and 'Kansas Hybrid', both with the Siberian Elm "", but it has since been suggested that the American elm in question was more likely to have been "", or Red Elm.

The American Elm in literature

“There was not in the whole countryside another tree which could compare with him. He was matchless. Never a stranger passed the elm but stopped, and stared, and said or thought something about it. Even dull rustics looked, and had a momentary lapse from vacuity. The tree was compelling. He insisted upon recognition of his beauty and grace. Let one try to pass him unheeding and sunken in contemplation of his own little affairs, and lo! He would force himself out of the landscape, not only upon the eyes, but the very soul……” from "" by .

“At last, all at once, when I was not thinking of it--I declare it makes my flesh creep when I think of it now--all at once I saw a great green cloud swelling in the horizon, so vast, so symmetrical, of such Olympian majesty and imperial supremacy among the lesser forest growths, that my heart stopped short, then jumped at my ribs as a hunter springs at a five-barred gate, and I felt all through me, without need of uttering the words, 'This is it!' . . . What makes a first-class Elm? Why, size in the first place, and chiefly. Anything over twenty feet of clear girth, five feet above the ground, and with a spread of branches a hundred feet across, may claim, that title, according to my scale.” from "" by .