Orania is a South African town located along the Orange River in the arid Karoo region of its Northern Cape province. Orania is unique in that the entire population is made up of Afrikaners. The aim of the town is to create a stronghold for Afrikaans and the Afrikaner identity by keeping their language and culture alive. Anyone who defines themselves as an Afrikaner and identifies with Afrikaner ethnicity is welcome in Orania.[2] In 2004 Orania introduced its own currency, the Ora. 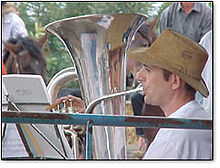 In December 1990, about 40 Afrikaner families, headed by Carel Boshoff, the son-in-law of former South African prime minister Hendrik Verwoerd, bought the dilapidated town, which was a construction camp of builders of the Vanderkloof Dam on Gariep River for around US$ 200,000.[3] This was a few months after the repeal of apartheid laws and the release of Nelson Mandela from prison. The town is privately owned by the Vluytjeskraal Aandeleblok company. The farm on which Orania was founded, is called "Vluytjekraal". Along the Orange river grows a fine reed, called "fluitjiesriet" or in old Dutch spelling "Vluytjesriet," meaning whistle reed. A kraal is an Afrikaans word borrowed from Portuguese[4] for a cattle enclosure. As wood for poles is scarce, these reeds were traditionally used for building cattle enclosures, until stone structures could be erected., Aandeleblok refers to the company structure that allows people to buy shares and thereby obtain the right to stay on and work a piece of ground within the property of the company. The shareholders thus own the company, which in turn owns the property. The town was bought from the Department of Water Affairs, which built the town for the workers building a canal network utilising the water in the Orange River, when the project was completed. 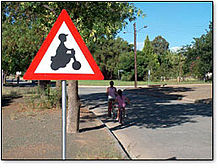 According to its founders, the purpose of Orania is to create a town where the preservation of Afrikanerdom's cultural heritage is strictly observed and Afrikaner selfwerksaamheid ("self reliance") is an actual practice, not just an idea. All jobs, from management to manual labour, are filled by Afrikaners only; non-Afrikaner workers are not permitted. "We do not want to be governed by people who are not Afrikaners", said Potgieter, the previous chairman. "Our culture is being oppressed and our children are being brainwashed to speak English".[5]

The flag comprises a small boy, pulling up his sleeves, and a blue and orange background, traditional Afrikaner colours.

The idea of a strictly Afrikaner settlement in modern South Africa is not new. In the 1980s, a group of right-wing Afrikaners, led by HF Verwoerd's son formed a group called the Oranjewerkers. They also planned a community based on "Afrikaner self-determination", and attempted to create a neo-"boerstaat" (lit. "Farmer State," a reference to an idiomatic term for an Afrikaner-only state) in the remote Eastern Transvaal (now Mpumalanga) community of Morgenzon.[6] Its failure was possibly due to the fact that South Africa had an Afrikaner government at the time and so few perceived any benefit from this community.[original research?]

In November 2005, around 60 Cape Coloured families lodged a land claim with the government, for around 483 hectares of land within the town. These families claimed to have lived in the town from 1965, when it was first constructed, up until 1991, when it was sold by the government. The claimants hold that they were forced to leave in 1991, when the town was converted into Orania, and that this constitutes a forced removal in terms of race. The community of Orania opposed the claim.[7] The land claim was settled in December 2006 when the South African government agreed to pay the claimants R2,9 million in compensation.[8]

As of 2010[update], Orania is home to an unknown number of inhabitants, with around 10,000 registered supporters (2010).[9] Orania has three residential areas Kleingeluk ("little luck"), Grootdorp ("big town") and Orania Wes ("Orania West"). In Orania people from all levels of society perform their own manual labour.[5]

Since purchasing the 430ha town, the community has added 7 000ha of agricultural land to the town.[10]

The people of Orania believe in protecting the environment.

There are two schools, the CVO Skool Orania (where CVO stands for Christelike Volks-Onderwys or Christian People's-Education) and Die Volkskool Orania (Orania People's School). Although the official curriculum is followed, special emphasis is placed on Afrikaner history and Christian religion, though with some differences in their teaching methods.[12]

Farming is an important part of Orania's economy, the most recent project being a massive pecan nut plantation.[15] 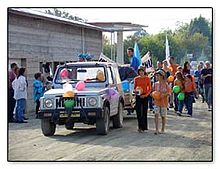 During April 2004, Orania launched its own monetary system, called the Ora, based on the idea of discount shopping vouchers.[16] The Orania local banking institution, the Orania Spaar- en Kredietkoöperatief ("Orania Savings and Credit Co-operative") is in charge of this initiative. Orania recently launched its own chequebook.[17]

In 2005, after complaints by citizens, the Independent Communications Authority of South Africa shut down Orania's unlicensed Radio Club 100 radio station, on grounds of its alleged racism.[20] The station's equipment was seized. No criminal charges were laid against the operators of the radio station, who claim that the radio station broadcast harmless news about birthdays and social events. Management of the radio station claimed that they repeatedly applied for a radio license in order to be a community broadcaster like other radio stations in the country.

In January 2010, Afrikaans daily newspaper Beeld published an article by Frans de Klerk, chief executive of Orania, in which he sets out what he views as the successes of Orania.[22] De Klerk also distanced the town from racist organizations using Orania to further their own causes. Shortly after, Die Burger, another Afrikaans daily newspaper and sister publication of Beeld, published an article by author and journalist Marida Fitzpatrick, describing her experiences when visiting Orania.[23] Fitzpatrick praised the town for its safety and environmentally friendly approaches to living, but also wrote that overt racist ideas and ideology still underpinned the views of many residents.[23]

On Thursday 5 June 1998, Mr. Valli Moosa (then Minister of Constitutional Development in the ANC government) stated in a parliamentary budget debate that, "The ideal of some Afrikaners to develop the North Western Cape as a home for the Afrikaner culture and language within the framework of the Constitution and the Charter of Human Rights is viewed by the government as a legitimate ideal."[24]

On July 4, 2007 the town of Orania and the Northern Cape government agreed that the question of Orania's self-government should be discussed at all government levels.[25]

In the recent South African general election, 2009, the community decisively voted for the Freedom Front Plus party.[26]

Debate surrounding a volkstaat returned to the mainstream media following the murder of AWB leader Eugene Terre'Blanche in April 2010. Boshoff claimed a symbolism of the murder for farm murders that he described as "nothing other than a state of war". Yet he rejected an invitation to Terre'Blanche's funeral, "I'm not enamoured of him.. He chose a path of confrontation, of conflict. We wanted another way."[27]

In a conciliatory gesture, then President of South Africa Nelson Mandela, visited the town in 1995 to have tea with Betsie Verwoerd, widow of Hendrik Verwoerd.[28]

In 2009, an ANCYL delegation visited the town. The leader Julius Malema praised the co-operation between residents "They co-operate instead of working against each other".[30]

Election results for Orania in the South African general election, 2009.[32]