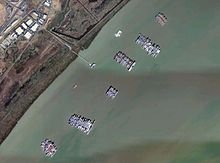 The National Defense Reserve Fleet (NDRF) consists of "mothballed" ships, mostly merchant vessels, that can be activated within 20 to 120 days to provide shipping for the United States of America during national emergencies, either military or non-military, such as commercial shipping crises.

The NDRF is managed by the U.S. Department of Transportation's Maritime Administration (MARAD). It is a different entity from the United States Navy reserve fleets, which consist largely of warships.

Through the 2010s, the oldest, most decrepit hulls at Suisun Bay will be stripped of toxic materials, then broken up in Texas, California or Asia. Twenty of the most polluting mothball ships are slated for recycling by 2012, as are 32 more by 2017. Unaffected will be the battleship USS Iowa which has been moved to Richmond to prepare for relocation to the Port of Los Angeles to become a museum ship.

The NDRF was established under Section 11 of the Merchant Ship Sales Act of 1946 to serve as a reserve of ships for national defense and national emergencies.

In 1976, a Ready Reserve Fleet component was established as a subset of the NDRF to provide rapid deployment of military equipment and later became known as the Ready Reserve Force, which numbers 72 vessels. An additional 28 ships are held under United States Maritime Administration (MARAD) custody for other Government agencies on a cost-reimbursable basis including the 1943 vintage battleship USS Iowa (BB-61) at Suisun Bay.

USS Iowa (BB-61) has been in the custody of MARAD in the NDRF at Suisun Bay since April, 2001. The vessel was officially struck from the naval register in March 2006, to eventually become a museum ship.

Vessels with military utility or logistic value are held in retention status and are in a preservation program that is designed to keep them in the same condition as when they enter the fleet. The internal spaces are dehumidified to slow the corrosion of metal and the growth of mold and mildew. DC power is distributed through anodes to the exterior underwater portions of the hull, creating an electric field that suppresses corrosion and preserves the surface of the hull. External painting and other cosmetic work is generally deferred since it does not affect the ability to activate and operate the vessel.

MARAD is authorized as the government’s disposal agent through the NDRF program for merchant type vessels equal to or greater than 1,500 gross tons. A state agency can file an application to request title to a vessel "as-is where-is" from the NDRF for the purpose of creating an artificial reef. A total of 51 vessels have been transferred to 10 states under the program including: Texas (12), Florida (10), North Carolina (7), Virginia (6), Alabama (5), Mississippi (5), Georgia (2), South Carolina (2), California (1) and New Jersey (1). Of the 132 non-retention vessels in the NDRF, there are 117 that are being prepared for disposal.

The NDRF program can give and lend historic artifacts to maritime-heritage organizations and transfer entire ships to memorial associations through special legislation.

Inactive naval ships of merchant design, including amphibious ships but not ships maintained in a mobilization status by MARAD for Military Sealift Command (MSC), may be laid up in the NDRF when overcrowded berthing conditions exist at a Navy Inactive Ship Maintenance Facility. Battleships, cruisers, and aircraft carriers which have been stricken or those awaiting final disposition may be transferred to MARAD locations for berthing.

Initially, these ships will be transferred to MARAD for caretaking in accordance with the Economy Act of 1932.

Ships transferred to the NDRF may be retained in Navy Mobilization Plans and maintained by MARAD under priorities set by the Department of the Navy. If the Navy decides it no longer needs the ship, the Secretary of the Navy strikes the ship from the Naval Vessel Register and transfers the title to MARAD. When possible, MARAD gets first disposition rights, which allows it to convert merchant ships to the Ready Reserve Force (RRF) or to sell the ship for scrapping in connection with the Merchant Marine Act of 1936, Sec. 508 and use the proceeds to buy more supply ships.[1]

Mothballed ships in Suisun Bay, California (2010). USS Iowa (BB-61) can be seen at the far end of the first row

The Suisun Bay location contained 324 ships in 1959.[1] Forty years later, the number was down by about 250, but pollutants had begun to accumulate in the area. Paint containing toxins such as lead, copper, zinc and barium had been flaking off of many of the ships' hulls and superstructures. By June 2007, some 21 tons of toxic paint debris was estimated to have been shed from the ships, to settle in the bay sediment.[2] A further 65 tons of paint was estimated to be in danger of flaking off.[2]

David Matsuda, acting administrator of MARAD, said in March 2010 "We are moving expeditiously to remove the worst-polluting ships first and diligently moving to clean the rest."[3] Some 52 ships were identified as problematic, and were scheduled for removal and recycling by September 2017.[2] The 20 that were in the most advanced state of decay were to be eliminated by September 2012,[4] that process beginning in November 2009. One such vessel, the SS Winthrop, the last Victory ship of the California mothball fleet, was towed in March 2010 to BAE Systems San Francisco Ship Repair dock to be cleaned of barnacles and plant matter before its final journey to ship breakers in Brownsville, Texas.[5] The hull cleaning was prescribed by the U.S. Coast Guard to prevent the spread of California species to other locations.[2] Some of the recycling work may be completed in the San Francisco Bay Area, specifically at the former Mare Island Naval Shipyard—an application for such work is under permit review. Some $38 million in federal funds will be used to complete the dismantling project.