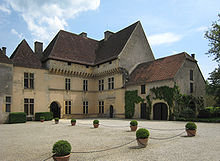 The Château de Losse and its gardens have been listed as French Historical House and Site since 1928. They are located in Périgord, Dordogne district, South-West of France, near the Lascaux pre-historic caves, on the Vézère river.

The medieval fortress overlooks the Vézère river. In 1575 a Renaissance Hall was built within the stronghold. It is enclosed by curtain walls and surrounded by a deep ditch. Inside the fine décor and the exceptional period furnishings bear witness to the grand lifestyle of the Marquess of Jean II de Losse in the 16th century. The gardens within the walls or terraced over the river are in perfect harmony and offer a view over an unspoilt virgilian countryside.

The Losse family came from Flanders in the 11th century and subsequently built a stronghold on the Vézère right bank. From that time they belonged to the feudal hierarchy. Later on their allegiance went to the king of France.

The Hall was built in 1576 inside the medieval fortress by Jean II Marquess of Losse.

A great soldier, his loyalty to the Crown was the source of his military and social good fortune. He was page to François I, served all the sons of Catherine de' Medici and was tutor to Henri IV. As a courtier he saw the prevalent Renaissance criteria used in contemporary buildings in Paris and elsewhere. At the end of his career he returned to Périgord as General governor of Limousin and Guyenne. The changes he then made to his ancestral home were in accordance with the taste of the times, while retaining a country-like sobriety. Since however, the religious wars still raged, he put his great experience in defending royal places against the Imperial troops to improving the defensive apparel of the castle for the use of fire arms (e.g. muskets and canons). This can be seen from the various openings in the curtain walls and the barbizan.

He was a contemporary of Montaigne and also wished to leave motto that echoed his life These were engraved in different places of the castle. Over the entrance you will read : « Man does as he may, Fortune (fate) as she will »

Such as we see it today it has remained unaltered since the 16th century, save for the wear of time. It was therefore listed as "Historical Monument" in 1928.

Its sole access is by the bridge over the moat and through a fortified gatehouse (the largest of its kind in France).

In the courtyard, the façade of the Hall (1576) is a perfect example of Renaissance architecture. Its characteristic features are beautifully carved in the golden stone of Périgord.

On the riverside the grandiose terrace built on the cliff offers a view of great beauty down the Vézère valley.

The grand staircase with stone ornaments leads to rooms with sculpted mantelpieces. The outstanding period (15th and 16th centuries) furnishings are unanimously admired by our visitors. Complete with paintings and tapestries the atmosphere of a home at the time of the last Valois and the first Bourbon is perfectly evoked. 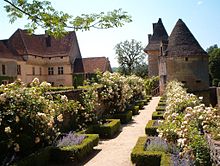 Roses Garden over the walls

In the hornbeam ‘green chambers’ as they were designed in the 17th century, the labyrinthine walk windows open onto the castle and the flower beds. Upon reaching the river the balcony, dating back to the 16th century , allows a delightful view downstream.

In the garden within the walls, the walk through the shady scented wisteria tunnel leads to the box crenellated and rose lined watch patch. A few steps go down to the lavender beds framed by rosemary as in Elizabethan times. There runs the canal from the Apollo and Venus fountain. The tangible yet poetic charm of this garden is made of scented plants, of the sound of running water and of pleasurable sights. Garden seats near the little knot garden invite you to savour it.