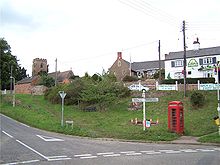 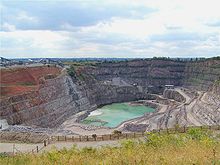 Croft is a village of 700 homes in the district of Blaby in Leicestershire, England, off the old Fosse Way and straddling the River Soar. Nearby places include Stoney Stanton, Broughton Astley, Huncote and Narborough. The Hinckley to Leicester railway line runs through the village.

The village of Croft is about 8 miles (13 km) south west of the City of Leicester in the District of Blaby in Leicestershire. The Civil Parish covers an area of 897 acres (3.63 km2).

Arbor Road and Broughton Road run from the B4114 (Fosse Way) into the village and Huncote Road runs towards the village of Huncote which lies to the other side of Croft Hill. The village comprises a mix of house types of various ages, factories and shops. The village has a primary school, parish church and public house. Croft Quarry occupies a site at the end of the older part of the village.

Croft Hill stands 128m high rising up the Soar flood-plain, and stands out as an isolated landmark almost at the physical centre of England. The Hill provides a number of habitats including broad leaved woodland, scrub land, acidic grassland and two other distinct areas of grassland. It is an important area in view of the variety of flora, fauna, birds and butterflies which inhabit or visit at various times of the year.

The New Hill has been constructed to the East of Croft Hill out of quarry waste, and is being landscaped and planted to match the local flora.

The village has an industrial area on Winston Avenue with offices and manufacturing companies.

There are also a number of farms, a parade of shops on Pochin Street, and a new office compex, Riverside Court, yet to be occupied.

Croft Railway Station used to serve the village, but was closed as a result of the Beeching Axe.

Croft Cricket Club play at the Recreation Ground, Winston Avenue. Their website[2] has lots of statistics, history and photographs of old and new faces. 2007 was their centenary year. They run two Saturday teams, a Sunday team and junior teams.

Croft F.C. also play at the recreation ground on the adjacent football pitch. A Multi-Use Games Area (MUGA) was built at the Recreation Ground in 2009.

Croft Fun Park was opened in 2002 by Graham Rowntree.

Croft Silver band will celebrate its 110th aniversary in 2011.

It is local tradition that the parish stone pit at Croft, known as the Clevis, was originally a first century Roman granite quarry used in the construction of the foundations and bridges of the Fosse Way.[3]

Fenn states that the place-name Croft was first recorded in 836, and is derived from the Old English cræft 'craft, a machine, engine'. The craft in question could perhaps be that of quarrying.[4]

The occasion in 836 was an assembly at Croft when the King Wiglaf of Mercia was joined by Archbishop of Canterbury (Ceolnoth) and eleven of his bishops and three abbots, besides twenty-two laymen of authority and influence. They gathered to witness the grant of land by Wiglaf to the monastery of Hanbury, Worcestershire.[5]

In the 1920’s, Croft Hill was used as a picnic spot for Sunday School trips and was popular with Leicester people, it being a short train journey from the surrounding areas.[6]

The Canadian politician and businessman Charles Avery Dunning was born in Croft in 1885.
The children's novelist Monica Edwards lived in Croft 1938-1939.[7]
Laura McLaren, Baroness Aberconway a suffragist and gardener who improved & expanded Bodnant Garden.
She was the daughter of Henry Davis Pochin, a member of the local quarrying family, and noted industrialist and chemist.
The controversial writer David Icke lived in Croft for a time in the 1970s.