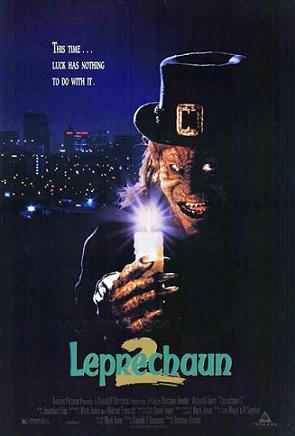 "Leprechaun 2" is a sequel to "Leprechaun". Rated R by the , it centers around a sadistically evil () hunting for a bride.

The prologue of the movie features the leprechaun's unwilling servant, an Irish man by the name of William O'Day, thwarting his master's plans to wed his daughter. The leprechaun, having turned 1000 on , is old enough to marry any girl who sneezes three times, provided that no one intervenes with "God bless you". O'Day does save his daughter the fate of marrying the leprechaun, at the cost of his life; before O'Day dies, the leprechaun vows that he will marry his daughter's descendant when he is 2000.

In the present, two years after the events of the first movie (the leprechaun has somehow escaped being trapped in the well), the leprechaun has found Bridget, who is fighting with her boyfriend, Cody. Cody, whose legal guardian is his uncle, Mort, frequently has to break their dates in order to support Mort, an scam artist. The leprechaun follows Bridget to her house, where a boy named Ian Lyle is attempting to persuade her into letting him in; she replies with a swift elbow to his ribs.

The leprechaun then creates an illusion that fools Ian into believing that Bridget is asking him to kiss her big breasts; in actuality, they are a pair of lawnmower blades, that start up after Ian shoves his face into them. Shortly afterwards, Cody knocks on the door and apologizes, offering flowers, which cause Bridget to sneeze. The third time she sneezes, Cody begins to say, "God bless you," but is unable to complete the blessing when the leprechaun attempts to strangle him with a telephone chord. After a struggle, the leprechaun grabs Bridget and disappears, but has lost one of his gold coins, which Cody finds.

The police soon arrive, find Bridget missing, and a note from Cody at the scene, and get an arrest warrant out for him. Cody returns to Mort's house and tells him what happened; Morty is convinced that he is crazy until the leprechaun breaks into the house and they barely escape.

Morty and Cody then go to a bar, which is filled with little people dressed as leprechauns, celebrating St. Patrick's Day. While there, Cody is given a piece of milk chocolate in a gold wrapper. The leprechaun follows them to the bar, and Morty challenges him to a drinking contest; while the leprechaun downs hard whiskey, Morty is actually drinking soda and water. The leprechaun ends up falling-down drunk. Then, he uses his magic to bash Morty in the head to distract Cody, and gets away.

He goes to a coffee shop, where he sobers up, and takes the time to murder a waiter who is making jokes about his size, while Cody and Morty break into the go-kart racetrack that Ian worked at; the office contains a huge safe on wheels made of wrought iron, the only thing that can harm a leprechaun. Cody traps the leprechaun inside, but Morty takes advantage of the opportunity to claim three wishes. His first is for the leprechaun's pot of gold, which the creature causes to appear in Morty's stomach, grotesquely stretching it. Morty wishes for the leprechaun out of the safe so that he can help him, and, for his third wish, asks for the pot of gold out of him. The leprechaun cuts Morty's stomach open and pulls out the pot, killing Morty.

Just then, a security guard, who has responded to a silent alarm that Morty tripped, enters. The leprechaun disappears, setting Cody up to take the fall for the brutal murder. Before he can arrest Cody, however, the officer is lured into the tracks and run over by the leprechaun in a go-kart. The leprechaun attempts to kill Cody for his gold coin, but Cody realizes that as long as he holds it, the leprechaun cannot harm him, and runs to the leprechaun's lair to rescue Bridget.

In the cave, Bridget manages to break free from her shackles, and they both flee, but get hopelessly lost and separated. The leprechaun then disguises himself as Bridget, kisses Cody, and tells him to just return the coin; Cody, knowing from the kiss that it is really the leprechaun, hands him the chocolate coin. When the leprechaun is distracted, he impales it with a wrought iron bar, causing it to explode.

Then Bridget and Cody head out into the sunlight together. She asks him how he knew that it wasn't really her he originally gave the coin to. Cody's reply is, "He kisses better than you."

*The waiter killed by hot steam was played by Michael McDonald, one of the most popular cast members of MAD-TV and former Groundling.
* A direct quote from the first movie states the Leprechaun is 600 years old, not nearly 2000.
* Some of the killing scenes were edited and the uncut footage is now considered lost. Additionally, this is the only film in the "Leprechaun" series that was edited for violence.