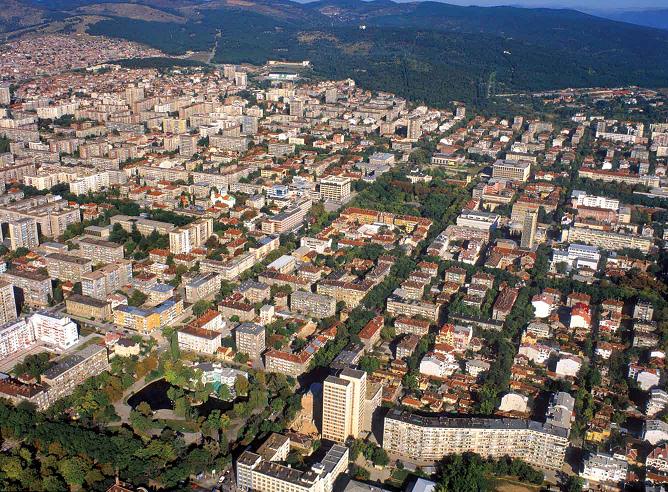 Stara Zagora ( _bg. Стара Загора) is the sixth largest city in , and one of the nationally important economic centres. Stara Zagora is known as the city of straight streets, s, and . According to the city's , it is one of the oldest settlements in , being at least eight thousand years old. According to one unofficial study, Stara Zagora ranks second among the cities in Bulgaria by average salary. [ [http://www.karieri.bg/show/?storyid=312279 За търсещи работа - Новини - 880 лв. средна заплата в София - KARIERI.bg ] ]

Stara Zagora is the administrative centre of its municipality and the . It is located about km to mi|spell=Commonwealth|231 away from , near the Bedechka river in the historic region of . The population is about 162,400

The city is located in an area of transitional continental climate with considerable influence. The average yearly temperature is about C to F|spell=Commonwealth|13.

Stara Zagora is considered one of the oldest settlements in Bulgaria and .Fact|date=May 2007 It was founded by the under the name "Beroe" (meaning "iron") about 6th-, with the dwellings and the copper mine near the city being the oldest preserved ones in . The area has been a mining region since Antiquity.

Under the , the town was renamed to "Augusta Trajana" in honour of emperor .

At the time of the , it adopted the name "Irinopolis" after Byzantine empress Irene. The fortifications around the town were reconstructed because of fear of Bulgarian attacks, but Irinopolis and the whole Zagore region were reincorporated into in 717. The land was bestowed on khan as a Byzantine gift in acknowledgement of the Bulgarian help to fight back the besieging . The region was the first Bulgarian territorial gain south of . The town acquired the name "Boruy".

In 1122 Stara Zagora ("Beroia") was the site of a battle between Byzantine Emperor and an invading army, the . The Pechenegs suffered a crushing defeat at the hands of John's Byzantine army, and many of the captives were settled as within the Byzantine frontier. In 1208 the Bulgarians defeated the in the .

The conquered Stara Zagora in 1371. A grade school was built in 1840 and the town's name was changed to "Zheleznik" ( _bg. Железник; a Slavic translation of "Beroe") in 1854 instead of the Turkish " _tr. Eskizağra", but was renamed once again to "Stara Zagora" in 1870. After the from Ottoman rule in 1878, it became part of autonomous before the two Bulgarian states finally merged in 1886 as a result of the .

* on , is named after this city, in its previous incarnation as Beroe.
* One of the two lighting factories Svetlina is situated here.