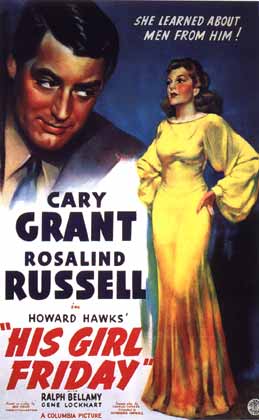 The film stars and and features . It was directed by and is noted for the rapid-fire pace of its dialogue.

The film was #19 on American Film Institute's 100 Years, 100 Laughs, and has been selected for preservation in the United States . Today the film is in the , which hasn't prevented Columbia from issuing official video releases of the film.

Walter Burns () is a hard-boiled editor for "The Morning Post" whose ex-wife and former star reporter, Hildegard "Hildy" Johnson () is about to marry bland insurance man Bruce Baldwin () and settle down to a quiet life as a wife and mother in &ndash; but Burns has other ideas. He entices the reluctant Johnson into covering one last story: the upcoming execution of convicted murderer Earl Williams ().

Walter does everything he can to keep Hildy from leaving, including setting Bruce up so he gets arrested over and over again on trumped-up charges. He even kidnaps Hildy's stern mother-in-law-to-be (). When Williams escapes from the bumbling sheriff () and practically falls into Hildy's lap, the lure of a big scoop proves to be too much for her. She is so consumed with writing the story that she hardly notices as Bruce realizes his cause is hopeless and leaves to return to Albany.

The crooked mayor () and sheriff need the publicity from the execution to keep their jobs in an upcoming election, so when a messenger () brings them a reprieve from the governor, they try to bribe the man to go away and return later, when it will be too late. Walter and Hildy find out just in time to save Walter from being arrested for kidnapping.

Afterwards, Walter offers to remarry Hildy, promising to take her on the honeymoon they never had in , but then Walter learns that there is a newsworthy strike in Albany, which is on the way to Niagara Falls by train.

"His Girl Friday" was originally supposed to be a straightforward retelling of "The Front Page", with both the editor and reporter being men, however during auditions, Howard Hawks' secretary read reporter Hildy Johnson's lines. Hawks liked the way the dialogue sounded coming from a woman, so the script was rewritten to make Hildy female, and the ex-wife of editor Walter Burns.

Hawks had a very difficult time casting this film. While Cary Grant's casting was almost immediate, the character of Hildy was a far more complicated process. At first, Hawks wanted for the role, whom he had directed in the screwball comedy "Twentieth Century", but the cost of hiring Lombard in her new status as a freelancer proved to be far too expensive, and Columbia could not afford her. , , , and were offered the role, but turned it down, Dunne because she felt the part was too small and needed to be expanded. was offered the part, and was suspended by the studio when she refused to take it. was reportedly also considered for the part.

Hawks then turned to Rosalind Russell, who was annoyed by the fact that she had not been his first choice, even arriving at her audition with wet hair. During filming, Russell noticed that Hawks treated her like an also-ran, so she confronted him: "You don't want me, do you? Well, you're stuck with me, so you might as well make the most of it."

"His Girl Friday" is noted for the rapid-fire pace of its dialogue, and was the first film to use overlapping dialogue to make the character's conversation sound more realistic, with one character beginning their line before the other could finish. Hawks had said to , "I had noticed that when people talk, they talk "over" one another, especially people who talk fast or who are arguing or describing something. So we wrote the dialogue in a way that made the beginnings and ends of sentences unnecessary; they were there for overlapping." To get the effect he wanted, Hawks had the sound mixer on the set turn the various overhead microphones on and off as required for the scene, as many as 35 times.

During the film, Cary Grant's character describes the appearance of Ralph Bellamy's character, "Bruce Baldwin", finally saying "He looks like that actor...Ralph Bellamy!" According to Bellamy, the remark was ad libbed by Grant. Columbia studio head thought it was too cheeky and ordered it removed, but Hawks insisted that it stay. Grant also makes several "inside" remarks in the film, including a reference to his own real name, Archibald Leach. When his character has been arrested for kidnapping, he describes the horrendous fate suffered by the last person who crossed him: Archie Leach. [Earlier, when Earl Williams attempts to get out of the roll-top desk he's been hiding in, Grant says: "Get back in there, you Mock Turtle". The line dates back to the original version of "", but, coincidentally, Grant played "The Mock Turtle" in the fy|1933 film version of "Alice in Wonderland". Miller, Frank [http://www.tcm.com/tcmdb/title.jsp?stid=206&category=Articles "His Girl Friday" (TCM article)] ]

"His Girl Friday" and the original Hecht and MacArthur play were later adapted into another stage play, "His Girl Friday", by playwright . This was presented at the National Theatre, London, from May to November 2003, with as Burns and as Hildy.