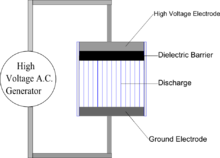 The process normally uses high voltage alternating current, ranging from lower RF to microwave frequencies.[4] However, other methods were developed to extend the frequency range all the way down to the DC. One method was to use a high resistivity layer to cover one of the electrodes. This is known as the Resistive Barrier Discharge.[5] Another technique using a semiconductor layer of Gallium arsenide (GaAs) to replace the dieletric layer, enables these devices to be driven by a DC voltage between 580V and 740V.[6]

DBD devices can be made in many configurations, typically planar, using parallel plates separated by a dielectric or cylindrical, using coaxial plates with a dielectric tube between them.[7] In a common coaxial configuration, the dielectric is shaped in the same form as common fluorescent tubing. It is filled at atmospheric pressure with either a rare gas or rare gas-halide mix, with the glass walls acting as the dielectric barrier. Due to the atmospheric pressure level, such processes require high energy levels to sustain. Common dielectric materials include glass, quartz, ceramics and polymers. The gap distance between electrodes varies considerably, from less than 0.1 mm in plasma displays, several millimeters in ozone generators and up to several centimeters in CO2 lasers.

A multitude of random arcs form between the two electrodes during operation.[8] As the charges collect on the surface of the dielectric, they discharge in microseconds (millionths of a second), leading to their reformation elsewhere on the surface. Similar to other electrical discharge methods, the contained plasma is sustained if the continuous energy source provides the required degree of ionization, overcoming the recombination process leading to the extinction of the discharge. Such recombinations are directly proportional to the collisions between the molecules and in turn to the pressure of the gas, as explained by Paschen's Law. The discharge process causes the emission of an energetic photon, the frequency and energy of which corresponds to the type of gas used to fill the discharge gap.

DBDs can be used to generate optical radiation by the relaxiation of excited species in the plasma. The main application here is the generation of UV-radiation. Those Excimer ultraviolet lamps can produce light with short wavelengths which can be used used to produce ozone in industrial scales. Ozone is still used extensively in industrial air and water treatment.[7] Early 19th-century attempts at commercial nitric acid and ammonia production used DBDs[9] as several nitrogen-oxygen compounds are generated as discharge products.[3]

Usage of the generated plasma

The plasma itself is used to modify (clean) surfaces of materials (e.g. Polymers, semiconductor surfaces), that can also act as dielectric barrier, or to modify gases.

Since the 19th century, DBDs are known for their decomposition of different gaseous compounds, such as NH3, H2S and CO2. Other modern applications include semiconductor manufacturing, germicidal processes, polymer surface treatment, high-power CO2 lasers typically used for welding and metal cutting, , pollution control and plasma displays panels. The relatively lower temperature of DBDs makes it an attractive method of generating plasma at atmospheric pressure.

Dielectric barrier discharges were used to generate relatively large volume diffuse plasmas at atmospheric pressure and applied to inactivate bacteria in the mid 1990’s.[10] This eventually led to the development of a new field of applications, the biomedical applications of plasmas. This field is now known as plasma medicine.

An additional process when using Chlorine gas for removal of bacteria and organic contaminates in drinking water suppplies.[11] Treatment of public swimming Baths, Aquariums and Fish ponds involves the use of Ultraviolet radiation produced when a dieletric mixture of Xenon gas and glass are used.[12][13]

A dielectric barrier discharge is one method of plasma treatment of textiles at atmospheric pressure and room temperature.[14] The treatment can be used to modify the surface properties of the textile to improve wettability, improve the absorption of dyes, and for sterilization. DBD plasma provides a dry treatment that doesn't generate waste water or require drying of the fabric after treatment. For textile treatment, a DBD system requires a few kilovolts of alternating current,at between 1 and 100 kilohertz. Voltage is applied to insulated electrodes with a millimetre-size gap through which the textile passes.[15]

An excimer lamp can be used as a powerful source of short-wavelength ultraviolet light, useful in chemical processes such as surface cleaning of semiconductor wafers.[16] The lamp relies on a dielectric barrier discharge in an atmosphere of xenon and other gases to produce the excimers.

Due to their nature, these devices have the following properties:

Despite the operation with continuous sine waves or square waves, which is mostly used in high power industrial installations, pulsed operation of DBDs may lead to higher discharge efficiencies.

Drivers for this type of electric load are power HF-generators that mostly contain a transformer for high voltage generation. Drivers resemble the control gear used to operate Compact fluorescent lamps and Cold cathode fluorescent lamps. Especially the operation mode and the topologies of circuits for the generation of continuous sine or square waves are similar to those standard drivers. Beneficially, the energy that is stored in the DBD's capacitance does not have to be recovered to the intermediate supply after each ignition. Instead, it can stay within the circuit and only the real power, that is consumed by the lamp, has to be provided by the power supply. Because mostly multiple ignitions per voltage half-wave are enforced, the Power Factor of the lamp is quite high.

Differently, drivers for pulsed operation suffer from rather low power factor and in many cases must fully recover the DBD's energy. Basic topologies are Resonant Flyback [17] and Resonant Half Bridge[18] . A flexible circuit, that combines the two topologies is given in [19] and [20] and may be used to adaptively drive DBDs with varying capacitance.