The island of Alborán. 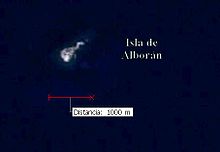 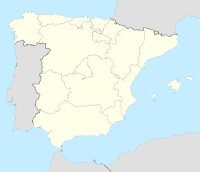 The Isla de Alborán is a small islet in the Alborán Sea, part of the western Mediterranean, about 50 km north of the Moroccan coast and 90 km south of the province of Almería, Spain. A Spanish possession since 1540, it was taken from the Tunisian pirate Al Borani in the Battle of Alborán. It is home today to a small Spanish Navy garrison and an automated lighthouse. Some 100 m off the northeastern end of the island is the small Isla de las Nubes (literally, island of the clouds).

While Morocco claims the Spanish-held plazas de soberanía enclaves and islands on or near the Moroccan coast as part of Greater Morocco, it has never filed a formal claim to Alborán.

During antiquity, Alboran was known as "Erroris" and as "Albusama".

Today, the island administratively belongs to the city council (Spanish: ayuntamiento) of Almería and is part of the Almería Pescadería (fish market) district.