Scouting Along with Burl Ives

Scouting Along with Burl Ives 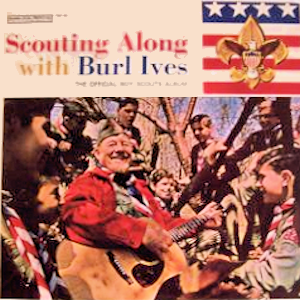 Ives had a long-standing relationship with the Boy Scouts of America. He was a Lone Scout before that group merged with the Boy Scouts of America in 1924. [Lone Scout Foundation, "How the Lone Scouts of America Came To Be": [http://www.lonescouts.net/002_how_lsa_came_2_b.htm link] .] The collection of his papers at the New York Library for the Performing Arts includes a photograph of Ives being "inducted" into the Boy Scouts in 1966. [Guide to the Burl Ives Papers, 1913-1975, New York Public Library for the Performing Arts: [http://www.nypl.org/research/lpa/the/pdf/THEIVES.pdf link] .] Ives received the organization's , its highest honor. [NNDB: Tracking the Entire World: Silver Buffalo: [http://www.nndb.com/honors/823/000043694/ link] . ] The certificate for the award is hanging on the wall of the Scouting Museum in Valley Forge, Pennsylvania. [The World of Scouting Museum at Valley Forge: Our Collection: [http://www.worldofscoutingmuseum.org/collection.html link] .] Ives often performed at the annual Boy Scouts of America jamboree, including the 1981 jamboree at Fort A.P. Hill in Virginia, where he shared the stage with the . [John C. Halter, "A Spirit of Time and Place," "Scouting Magazine", September 2004: [http://www.scoutingmagazine.org/issues/0409/a-sprt.html link] .] There is a 1977 sound recording of Ives being interviewed by boy scouts at the National Jamboree at Moraine State Park, Pennsylvania; on this tape he also sings and talks about scouting, teaching, etc. [WorldCat: OCLC No. 28143341: [http://www.worldcat.org/oclc/28143341&referer=brief_results link] .] Ives is also the narrator of a 28-minute film about the 1977 National Jamboree. In the film, which was produced by the Boy Scouts of America, Ives "shows the many ways in which scouting provides opportunities for young people to develop character and expand their horizons." [WorldCat: OCLC No. 5641115: [http://www.worldcat.org/oclc/5641115&referer=brief_results link] .]