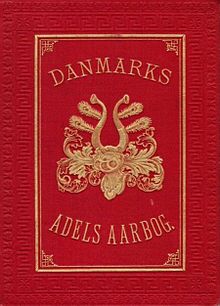 Cover of Danmarks Adels Aarbog (Yearbook of the Danish Nobility)

Nobility in Denmark was a leading social class until the 19th or 20th century. Danish nobility exists yet and has a recognized status in Denmark, a monarchy, but its real privileges have been abolished.

Danish nobility is divided in two categories: ancient nobility (Danish: uradel) and created nobility (Danish: brevadel). More informal categorization is between high and lower nobility (Danish: højadel, lavadel). Today, around 200 noble houses with an explicit title (baronial, comital, and so forth) yet continue. Ancient nobility refers to those noble houses that are known from the era before the Danish reformation, and created nobility are those houses that received their rank through an explicit patent when they first were elevated to nobility. Families of old Lord High Councillors of Denmark, and houses endowed by a title after 1660 (absolutism's beginning in Denmark) are regarded as high nobility of Denmark.

A striking feature has been the close ties medieval Danish magnate families had with German (Thuringian, Lower-Saxon, etc.) counts, apparently regarded more or less as their equals: for example in 13th century, there are several marriages between Danish magnate families and German counts in each generation. As a result, the ancestry[1] of countess Kristina of Gleichen, the mother of Günther of Schwarzburg, German King, happens to be almost totally Danish.

Chieftains of the so-called Galen clan, magnates in Scania and in Zealand, were among most frequent in Denmark to seal ties with North-German and Wendic princes by marriages, as shown in their lineages,[4] and by descents from a couple of their daughters married to princes in southern shores of the Baltic:

Landgrave and Land Baron are the definitions of the highest noble rank in Denmark. The rank was introduced in 1671 with the creation of counties and baronies. A Feudal Count is a count who is enfeoffed with a county by the Danish king.

There are two families with a Danish title of duke:

There are two primary periodical reviews of Danish nobility: