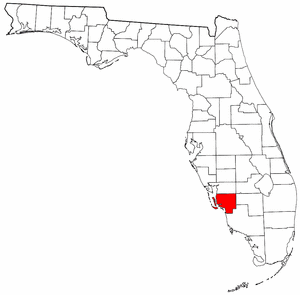 Lee County is a located in the of . The county makes up the entirety of the , and is the most populous county in .

Its is Fort MyersGR|6, and its largest city is Cape Coral.

Lee County was created in 1887 from Monroe County. It was named for , Confederate general in the .

Incorporated in 1886, Fort Myers is the center of a popular tourist area in Southwest Florida and the seat of Lee County. It is located about 120 miles south of Tampa at the meeting point of the Gulf of Mexico and the Caloosahatchee River. Fort Myers was the frequent winter home of , as well as . Lee County has been the host to several teams for , over the past several decades. Currently, it is the spring home of the , as well as the .

Fort Myers, built in 1850 as a military fort to fend off Seminole Indians that were massacring the area’s few settlers, was named after Col. Abraham C. Myers, who was stationed in Florida for seven years and was the son-in-law of the fort’s establisher and commander. In 1858, after years of elusive battle, chief Billy Bowlegs and his warriors were persuaded to surrender and move west, and the fort was abandoned. Billy’s Creek, which flows into the Caloosahatchee River and runs between The Beau Rivage Condominiums and Alta Mar, was named after a temporary camp where Billy Bowlegs and his men awaited ships to take them west.

The fort was abandoned until 1863 when a small number of Federal troops re-occupied the fort during the Civil War. In 1865 the fort was attacked unsuccessfully by a very small group of Confederates. After the war, the fort was again deserted.

The first settlers arrived in 1866, but it wasn’t until 1882 when the city experienced a significant influx of settlers. By 1885, when Fort Myers was incorporated, it was the second largest city only to Tampa on Florida’s west coast south of Cedar Key, even larger than Clearwater and Sarasota, also growing cities at the time.

Fort Myers first became a nationally known winter resort with the building of The Royal Palm Hotel in 1898. But what really sparked the city’s growth was the construction of the Tamiami Trail Bridge built across the Caloosahatchee River in 1924. After the bridge’s construction, the city experienced its first real estate boom and many subdivisions sprouted around the city.

In 1923, Collier and Hendry Counties were created by splitting these areas from Lee County. As recently as 2004, discussion had taken place surrounding the possibility of the city of Cape Coral becoming its own county, citing in particular a perceived lack of infrastructure support from the Lee County government. However a new county has not as of yet been created.

In , the county was hit hard by , particularly on the northwestern s of Captiva, Gasparilla and .

:*, in , serves over 7.6 million passengers annually. Currently, the airport offers non-stop flights to two cities in ( and ) and two in ( and ), in addition to 35 domestic non-stop destinations. 21 airlines operate scheduled service to and from the airport, with serving a of the airport's passengers. On September 9, 2005, the airport opened a new terminal.

:*, also in , just south of the incorporated limits of the City of Fort Myers, is the county's general aviation airport. Prior to the opening of Southwest Florida Regional Airport in 1983 (now ), Page Field was the county's commercial airport.

A small operation continues in Boca Grande, being used as a way-point for oil distribution. However, Port Boca Grande has been in decline for many years as the shipping industry has moved north, especially to the .

In addition, a private enterprise operates a high-speed passenger-only service between Fort Myers Beach From San Carlos Island and Key West. Another ferry service is offered from Fort Myers to Key West

The is an 8-person body including transportation officials from Lee and Collier Counties, the role of which is to raise toll revenue to widen and improve major arteries throughout both counties. Of particular priority is the needed revenue to widen the I-75 freeway beyond the 6-lane expansion due to begin in March 2007.

In March 2005, Lee County and Charlotte County concluded a transportation study on creating a circumferential freeway that would bypass downtown Fort Myers, running through downtown Cape Coral and .

The is being designed as an 8- to 10-lane structure, including minor frontage roads. It is to begin at the Jones Loop Road interchange with south of Punta Gorda in Charlotte County, and end at an upgraded Colonial Boulevard interchange with near Lehigh Acres. [http://www.bicountystudy.com/]

:*Interstate 75: Two 2-travel-lane spans (one northbound, one southbound) between the State Road 78 ("Bayshore Road") and State Road 80 ("Palm Beach Boulevard") interchanges, over the .

:* (State Road 865): 3-travel-lane single-span bridge crosses Hurricane Bay and Matanzas Pass within the incorporated limits of the Town of Fort Myers Beach, connecting the mainland to the barrier islands.

:* (State Road 884): 4-lane single span bridge that connects Cape Coral with Fort Myers, over the . The Midpoint Bridge will be part of the future Bi-County Transportation Corridor.

:* (State Road 867): series of three 2-travel-lane single-span bridges and two 3-travel-lane island s crossing the mouth of the at the . The causeway connects with Sanibel.

Fixed-route bus service is provided by the Lee County Transit Department, operated as "LeeTran". Several routes extend outward from the Downtown Intermodal Transfer Center; in addition, suburb-to-suburb routes are operated, as well as park-and-ride service to and from both Fort Myers Beach and .

Lee County's daily newspaper is the .

The metropolitan area is home to 32 s.