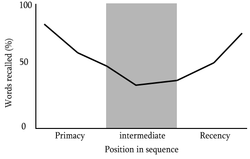 The serial position effect, a term coined by Hermann Ebbinghaus through studies he performed on himself, refers to the finding that recall accuracy varies as a function of an item's position within a study list [1] . When asked to recall a list of items in any order (free recall), people tend to begin recall with the end of the list, recalling those items best (the recency effect). Among earlier list items, the first few items are recalled more frequently than the middle items (the primacy effect).[2][3]

One suggested reason for the primacy effect is that the initial items presented are most effectively stored in long-term memory because of the greater amount of processing devoted to them. (The first list item can be rehearsed by itself; the second must be rehearsed along with the first, the third along with the first and second, and so on.) The primacy effect is reduced when items are presented quickly and is enhanced when presented slowly (factors that reduce and enhance processing of each item and thus permanent storage). Longer presentation lists have been found to reduce the primacy effect [4].

Many researchers tried to explain this phenomenon through free recall tests. In some experiments in the late 20th century, it was noted that participants who knew that they were going to be tested on a list presented to them would rehearse items. Meaning, as items were presented, the participants would repeat those items to themselves and as new items were presented, the participants would continue to rehearse previous items along with the newer items. It was demonstrated that the primacy effect had a greater influence on recall when there was more time between presentation of items so that participants would have a greater chance to rehearse previous (prime) items. [10][11][12]

Overt-Rehearsal was a technique that was meant to test participants' rehearsal patterns. In an experiment using this technique, participants were asked to recite out loud the items that come to mind. In this way, the experimenter was able to see that participants would repeat earlier items more than items in the middle of the list, thus rehearsing them more frequently and having a better recall of the prime items than the middle items later on. [13]

In another experiment, by Brodie and Murdock, the recency effect was found to be partially responsible for the primacy effect.[14] In their experiment, they also used the overt-rehearsal technique and found that in addition to rehearsing earlier items more than later items, participants were rehearsing earlier items later on in the list. In this way, earlier items were closer to the test period by way of rehearsal and could be partially explained by the recency effect.

These models postulate that later study list items are retrieved from a highly accessible short-term buffer, i.e. the short-term store (STS) in human memory. This allows items that are recently studied to have an advantage over those that were studied earlier, as earlier study items have to be retrieved with greater effort from one’s long-term memory store (LTS).

An important prediction of such models is that the presentation of a distractor, for example solving arithmetic problems for 10-30 seconds, during the retention period (the time between list presentation and test) attenuates such the recency effect. Since the STS has limited capacity, the distractor displaces later study list items from the STS so that at test, these items can only be retrieved from the LTS, and have lost their earlier advantage of being more easily retrieved from the short-term buffer. As such, dual-store models successfully account for both the recency effect in immediate recall tasks, and the attenuation of such an effect in the delayed free recall task.

According to single-store theories, a single mechanism is responsible for serial position effects.

A first type of model is based on relative temporal distinctiveness, in which the time lag between test and the study of each list item determines the relative competitiveness of an item’s memory trace at retrieval [17] [18]. In this model, end-of-list items are though to be more distinct, and hence more easily retrieved.

Another type of model is based on contextual variability, which postulates that retrieval of items from memory is cued not only based on one’s mental representation of the study item itself, but also of the study context [19][20]. Since context varies and increasingly changes with time, on an immediate free-recall test, when memory items compete for retrieval, more recently studied items will have more similar encoding contexts to the test context, and are more likely to be recalled.

Outside of immediate free recall, these models are also able to predict the presence of the recency effect (or lack thereof) in delayed free recall and continual-distractor free recall conditions. Under delayed recall conditions, the state of test context would have drifted away with an increasing retention interval, leading to an attenuated recency effect. Under continual distractor recall conditions, while the increased interpresentation intervals reduces the similarities between the given study contexts and test context, the relative similarities amongst items remains unchanged. As long as the recall process is competitive, recent items will win out, so a recency effect is observed.

Overall, an important empirical observation regarding the recency effect is that it is not the absolute duration of retention intervals (RI, the time between end of study and test period) or of inter-presentation intervals (IPI, the time between different study items) that matters. Rather, the amount of recency is determined by the ratio of RI to IPI (the ratio rule). As a result, as long as this ratio is fixed, recency will be observed regardless of the absolute values of intervals, so that recency can be observed at all time scales, a phenomenon known as time scale invariance. This contradicts dual-store models, which assume that recency depends on the size of STS, and the rule governing the displacement of items in the STS.

Potential explanations either then explain the recency effect as occurring through a single, same mechanism, or re-explain it through a different type of model that postulates two different mechanisms for immediate and long-term recency effects. One such explanation is provided by Davelaar et al. (2005) [21], who argue that there are dissociations between immediate and long-term recency phenomena that cannot be explained by a single-component memory model, and who argues for the existence of a STS that explains immediate recency, and a second mechanism based on contextual drift that explains long-term recency.

In 1977, William Crano decided to outline a study to further the previous conclusions on the nature of order effects, in particular those of primacy vs. recency, which were said to be unambiguous and opposed in their predictions. The specifics tested by Crano were:[22]

Change of meaning hypothesis
"adjectives presented first on a stimulus list established a set, or expectation, through which the meanings of the later descriptors were modified in an attempt to maintain consistency in the mind of the receiver."
Inconsistency discounting
"later descriptions on the stimulus list were discounted if inconsistent with earlier trait adjectives."
Attention decrement hypothesis
"earlier adjectives would wield considerably more influence than the later ones, and a primacy effect in the typical impression formation task would be expected to occur ... even when the stimulus list contains traits of a high degree of consistency."