Moby-Dick is an 1851 novel by Herman Melville which describes the voyage of the whaleship Pequod, led by Captain Ahab, who leads his crew on a hunt for the whale Moby-Dick. The novel has been adapted a number of times in various media. 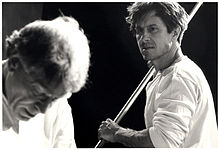 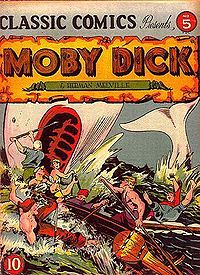 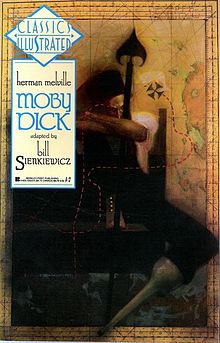 Significant deviations from the novel

Elijah: The vague and uncertain prophet of the text, ambivalent about religion, is replaced in both the 1956, 1998 and 2010 movie adaptations with a prescient Elijah who foretells the fate of the Pequod with confident precision. The 1956 film has Elijah waving his lame arm in pantomime foretelling Ahab's demise, and Ahab (played by Gregory Peck) moves his own arm in fulfillment of Elijah's prophecy.[20] In the 1998 television adaptation, Elijah warns that captain and crew shall all perish except one, and that by signing on they have effectively signed away their souls; Queequeg asks Ishmael what a soul is, to which Ishmael responds by leading Queequeg to a Christian church where Father Mapple (played by Gregory Peck) preaches the story of Jonah.[21] (In the text, the Jonah sermon occurs before Ishmael meets Elijah, and Queequeg leaves the chapel "before the benediction some time."[22]) The 2011 television miniseries has Elijah confront Ahab's wife (played by Gillian Anderson) as she leaves the church where Father Mapple has just preached his sermon, to openly reveal to her that on this voyage Ahab will die, and that he knows it. When she haughtily demands to know the reason for this prophecy, all he tells her is that he would never sail with Ahab again. [23]

Ahab's wife: Described by Ahab as his "girl-wife" in the text, we know no more about her, as she has no name. In the 2011 television mini-series, her name is Elizabeth and she and Ahab's son are used to show his home life and lay the foundation of his obsession with seeking the whale. Shown as a loving wife, she begs her husband to come to church with her, and Ahab refuses, stating he has no belief that God exists.[24]