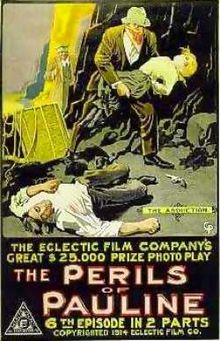 Poster of the 1914 "Perils of Pauline", which popularized the term cliffhanger in the medium of film

A cliffhanger or cliffhanger ending is a plot device in fiction which features a main character in a precarious or difficult dilemma, or confronted with a shocking revelation at the end of an episode of serialized fiction. A cliffhanger is hoped to ensure the audience will return to see how the characters resolve the dilemma.

The phrase is believed to come from the end-of-episode situation in adventure silent films of the early 1900s days, with the protagonist literally left hanging from the edge of a cliff, although[citation needed] the oldest usage the Oxford English Dictionary has is from 1937. Some serials end with the caveat "To Be Continued..." or "The End?" In television series, the following episode usually begins with a recap sequence.

The idea of ending a tale at a point where the audience is left in suspense as to its conclusion (which, in most cases, is then given at another time) may have been a staple part of storytelling for almost as long as the idea of stories have existed. It is a central theme and framing device of the collection of stories known as the One Thousand and One Nights, wherein the queen Scheherazade, who is facing a morning execution on the orders of her husband, King Shahryar, devises the solution of telling him a story but leaving it at a cliffhanger, thus forcing the king to postpone her execution to hear the rest of the tale.

The term 'cliffhanger' may have originated with Thomas Hardy's serial novel A Pair of Blue Eyes in 1873. At the time newspapers published novels in a serial format with one chapter appearing every month. To ensure continued interest in the story, many authors employed different techniques. When the novel was serialised in Tinsley's Magazine between September 1872 and July 1873, Hardy chose to leave one of the main protagonists, Henry Knight, literally hanging off a cliff staring into the stony eyes of a trilobite embedded in the rock. This became the archetypal—and literal—cliff-hanger of Victorian prose.

Once Hardy created it, all serial writers used the cliff-hanger even though Anthony Trollope felt that the use of suspense violated "all proper confidence between the author and his reader." Basically, the reader would expect "delightful horrors" only to feel betrayed with a much less exciting ending. Despite the rhetorical distaste all serial authors used the cliffhanger and Wilkie Collins is famous for saying about the technique: "Make 'em cry, make 'em laugh, make 'em wait – exactly in that order."

Collins is famous for the Sensation Novel, which relied heavily upon the cliffhanger. Examples of his endings include:

"The next witnesses called were witnesses concerned with the question that now followed--the obscure and terrible question: Who Poisoned Her? (The Law and the Lady) "Why are we to stop her, sir? What has she done?" "Done! She has escaped from my Asylum. Don't forget; a woman in white. Drive on." (The Woman in White) "You can marry me privately today," she answered. "Listen--and I will tell you how!" (Man and Wife)"

This anticipation and conversation inducing authorial technique would often be very contrived as the only purpose was to maintain interest in the monthly serial. Therefore, these were regularly removed from the plot when the serial was published as a full novel.

The cliff-hanger migrated to film and is best known from the popular silent film series The Perils of Pauline (1914), shown in weekly installments and featuring Pearl White as the title character, a perpetual damsel in distress who was menaced by assorted villains, with each installment ending with her placed in a situation that looked sure to result in her imminent death – to escape at the beginning of the next installment only to get into fresh danger at its end. Specifically, an episode filmed around the New Jersey Palisades ended with her literally left hanging over a cliff and seeming about to fall.

Possibly the most famous cliffhanger was at the end of the 1969 movie, The Italian Job, where the escape vehicle was literally balancing on the edge of a cliff.

Although a cliffhanger can be enjoyable as a page turner at the end of a chapter in a novel, a cliffhanger at the very end of a work can be frustrating. Cliffhangers can build anticipation (and, subsequently, profit) for sequels. However, if no sequel follows, effective suspension of disbelief can leave the audience or readership wondering what happened in the work's fictional realm. Sometimes (for example at the end of Blake's 7) that goes so far that people write fan fiction (or even publish a novel) deciding what happens next.

Cliffhangers were especially popular in 1920s and 1930s serials when movie theaters filled the cultural niche now primarily occupied by television. Cliffhangers are often used in television series, especially soap operas that end each episode on a cliffhanger. Prior to the early 1980s, season-ending cliffhangers were rare on U.S. television. The first such season-ender on U.S. TV was in the comedy send-up of soap operas Soap in 1978. Several Australian soap operas, which went off air over summer, such as Number 96, The Restless Years, and Prisoner, ended each year with major and much publicised catastrophe, such as a character being shot in the final seconds of the year's closing episode.

In the US, it was the phenomenal success of the "Who shot J.R.?" season-ending cliffhanger on Dallas, which closed the show's second season, that led the cliffhanger to become a popular staple on television dramas and later situation comedy series as well. Another notable cliffhanger was the "Moldavian Massacre" on Dynasty in 1985, which fueled speculation throughout the summer months regarding who lived or died when almost all the characters attended a wedding in the country of Moldavia, only to have revolutionaries topple the government and machine-gun the entire wedding party. The "Best of Both Worlds" episode of Star Trek: The Next Generation in 1990 is also cited as a reason that season-enders are popular today.

The two main ways for cliffhangers to keep readers/viewers coming back is to either involve characters in a suspenseful, possibly life-threatening situation, or to feature a sudden shocking revelation. The 2003 Season Finale of Home and Away features an example of both a shock cliffhanger (in the revelation that Angie Russell was Tasha Andrews' mother) and a suspense cliffhanger (the Sutherland family trapped in a mine shaft).

Cliffhangers are also used to leave open the possibility of a character being killed off due to the actor not continuing to play the role. The aforementioned Star Trek season finale worked around the possibility of Patrick Stewart's contract expiring. Between seasons, his contract was renewed and as a result, the character of Captain Picard survived the cliffhanger.[citation needed]

Cliffhangers are also sometimes deliberately inserted by writers who are uncertain whether a new series or season will be commissioned, in the hope that viewers will demand to know how the situation is resolved. Such was the case with the second season of Twin Peaks, which ended in a cliffhanger similar to the first season with a high degree of uncertainty about the fate of the protagonist, but the cliffhanger could not save the show from being canceled, resulting in the unresolved ending. Another notable example of this case was the Sledge Hammer! season 1 episode "The Spa Who Loved Me", which ended with the city destroyed by a nuclear explosion followed by this caption: "To Be Continued...Next Season?" A second season was eventually signed, but instead of explaining the fate of the characters following the explosion, the season 2 opener took place five years prior to the incident. The Season 5 Finale of ABC show LOST ends with the island survivors, in a different time zone of 1977 on the island, attempting to blow the island up with a hydrogen bomb. The final scene shows a fatally injured Juliet Burke hammering on the hydrogen bomb, which failed to detonate after Jack Shepherd drops the bomb down, what would later chronologically be called 'The Hatch/Swan'. The finale ends with a massive white light, then the credits. The cliffhanger has become a genre staple (especially in comics, due to the multi-part storylines becoming the norm instead of self-contained stories). To such a degree, in fact, that series writers no longer feel they have to be immediately resolved, or even referenced, when the next episode is shown---for example, the last episode of the second series of Graham Linehan's The IT Crowd ended with a substantial cliffhanger that was not addressed until the third episode of series three,[1] variously because the writer didn't feel it was "a strong enough opener,"[2] or simply "couldn't be bothered."[3] The heavily serialized television drama True Blood has become notorious for cliffhangers. Not only do the seasons conclude with cliffhangers, but almost every episode finishes at a cliffhanger directly after or during a highly dramatic moment.[4]

Commercial breaks can be a nuisance to script writers because some sort of incompleteness or minor cliffhanger should be provided before each to stop the viewer from changing channels during the commercial break. Sometimes a series ends with an unintended cliffhanger caused by a very abrupt ending without a satisfactory dénouement, but merely assuming that the viewer will assume that everything sorted itself out.

Sometimes a movie, book, or season of a television show will end with the defeat of the main villain before a second, evidently more powerful villain makes a brief appearance (becoming the villain of the next film). A good example of this is the anime version of Viewtiful Joe, which ends with Captain Blue being defeated and returned to normal, and then a large space craft approaching Earth. Pixar's The Incredibles spoofed this convention by having a new villain, The Underminer, burst into view from underground at the very end of the movie. The 2009 computer-animated film Astro Boy ended with an octopus-like alien hovering over the city and Astro flying to confront it.

Another example of cliffhangers in movies is the horror franchise Saw (franchise), which has all its movies ending with someone failing his tests and becoming trapped somewhere, leaving doubt as to what happened to him.