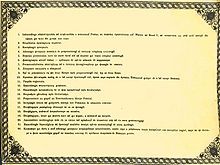 The 1849 Proclamation of Islaz written in Romanian Cyrillic.

The Proclamation of Islaz (Romanian: Proclamaţia de la Islaz) was the program adopted on June 9, 1848 by Romanian revolutionaries. It was written by Ion Heliade Rădulescu. On June 11, under pressure from the masses, Domnitor Gheorghe Bibescu was forced to accept the terms of the proclamation and recognise the provisional revolutionary government.

The Proclamation of Islaz has the form and value of a constitutional act. Between these 22 provisions are notably:

The location of Islaz (now in Teleorman County, then in Romanaţi County) was a small port on the Danube with some commercial significance, which, unlike the ports of Turnu Măgurele, Giurgiu and Calafat, was not under the direct control of the Turks.