β-Glucans (beta-glucans) are polysaccharides of D-glucose monomers linked by β-glycosidic bonds. β-glucans are a diverse group of molecules that can vary with respect to molecular mass, solubility, viscosity, and three-dimensional configuration. They occur most commonly as cellulose in plants, the bran of cereal grains, the cell wall of baker's yeast, certain fungi, mushrooms and bacteria. Some forms of beta glucans are useful in human nutrition as texturing agents and as soluble fiber supplements, but can be problematic in the process of brewing.

Yeast and medicinal mushroom derived β-glucans are notable for their ability to modulate the immune system. Research has shown that insoluble (1,3/1,6) β-glucan, has greater biological activity than that of its soluble (1,3/1,4) β-glucan counterparts.[1] The differences between β-glucan linkages and chemical structure are significant in regards to solubility, mode of action, and overall biological activity. 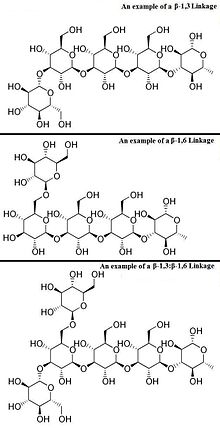 Glucans are polysaccharides that contain only glucose as structural components, and are linked with β-glycosidic bonds.

The numbers 1,4, and 6 identify the carbon atoms at each end of the glycosidic bond. Numbering starts next to the ring oxygen (See glucose).

By definition, beta-glucans are chains of D-glucose polysaccharides, linked by beta type glycosidic bonds. These six-sided D-glucose rings can be connected to one another, on a variety of positions on the D-glucose ring structure. Some β-glucan compounds are continual repeats of D-glucose attached at a specific position.

However, β-glucans can be more diverse than molecules like starch. For instance, a β-glucan molecule can be composed of repeating D-glucose units linked with β-glycosidic bonds at one position like starch, but have branching glucose side-chains attached to other positions on the main D-glucose chain. These smaller side-chains can branch off the β-glucan “backbone" (in the case of starch, the backbone would be D-glucose chains linked at the (1,4) position) at other positions like that of the 3 and 6 position. In addition, these side-chains can be attached to other types of molecules, like proteins. An example of a β-glucan that has proteins attached to it is Polysaccharide-K.

The most active forms of β-glucans are those comprising D-glucose units with (1,3) links and with side-chains of D-glucose attached at the (1,6) position. These are referred to as β-1,3/1,6 glucan. Some researchers have suggested that it is the frequency, location, and length of the side-chains rather than the backbone of β-glucans that determine their immune system activity. Another variable is the fact that some of these compounds exist as single strand chains, while the backbones of other β(1,3)-glucans exist as double or triple stranded helix chains. In some cases, proteins linked to the β(1,3)-glucan backbone may also be involved in providing therapeutic activity. Although these compounds can potentially enhance immune function, it must be emphasized that this research is in its infancy. In addition, there are differing opinions on which molecular weight, shape, structure, and source of β(1,3)-glucans provide the greatest biological activity. 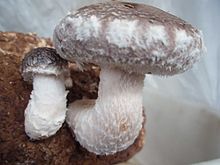 One of the most common sources of β(1,3)D-glucan for supplement use is derived from the cell wall of baker’s yeast (Saccharomyces cerevisiae). However, β(1,3)(1,4)-glucans are also extracted from the bran of some grains such as oats and barley, and to a much lesser degree in rye and wheat. The β(1,3)D-glucans from yeast are often insoluble. Those extracted from grains tend to be both soluble and insoluble. Other sources include some types of seaweed,[2] and various species of mushrooms such as Reishi, Shiitake, and Maitake.[3]

β-glucan and the immune system

β-glucans are known as "biological response modifiers" because of their ability to activate the immune system.[4] Immunologists at the University of Louisville discovered that a receptor on the surface of innate immune cells called Complement Receptor 3 (CR3 or CD11b/CD18) is responsible for binding to beta-glucans, allowing the immune cells to recognize them as "non-self."[5]

Several health claims requests were submitted to the EFSA NDA Panel (Dietetic Products, Nutrition and Allergies), related to the role of β-glucans in "maintenance of normal blood cholesterol concentrations and maintenance or achievement of a normal body weight". In July 2009, the Scientific Committee issued the following statements:[6]

The tumoricidal properties of beta-glucans have been studied in several in vitro and in vivo animal models.[7][8][9] In a mouse model study, beta 1,3 glucan in conjunction with interferon gamma inhibited tumors and liver metastasis.[10] In some studies, beta-1,3 glucans enhanced the effects of chemotherapy. In a mouse carcinoma model, beta-1,3 glucans did not reduce tumor incidence but was associated with reduced mortality in combination with cyclophosphamide.[11] In human patients with advanced gastric or colorectal cancer, the administration of beta-1,3 glucans derived from shiitake mushrooms, in conjunction with chemotherapy resulted in prolonged survival times.[12]

Alpha-Beta Technologies conducted a series of human clinical trials in the 1990s to evaluate the impact of β-glucan therapy for controlling infections in high-risk surgical patients.[13] In the initial trial 34 patients were randomly (double-blind, placebo-controlled) assigned to treatment or placebo groups. Patients that received the PGG-glucan had significantly fewer infectious complications than the placebo group (1.4 infections per infected patient for PGG-glucan group vs. 3.4 infections per infected patient for the placebo group). Additional data from the clinical trial revealed that there was decreased use of intravenous antibiotics and shorter stays in the intensive care unit for the patients receiving PGG-glucan vs. patients receiving the placebo.

The results of a phase III human clinical trial showed that PGG-Glucan therapy reduced serious post-operative infections by 39% after high-risk noncolorectal operations.[15] This study was conducted in patients that were already as high-risk because of the type of surgery and were more susceptible to infections and other complications.

A phase III clinical trial was proposed and conducted at thirty-nine medical centers in the U.S. involving 1,249 subjects stratified according to colorectal or non-colorectal surgical patients. The PGG-glucan was given once pre-operatively and three times post-operative at 0, 0.5 or 1.0 mg/kg body weight. The measured outcome was serious infection or death of the subjects within 30 days post-surgery. Injectable PGG-Glucan therapy reduced serious post-operative infections by 39% after high-risk noncolorectal operations.[15]

A study conducted by the Canadian Department of Defense showed that orally administered yeast β-glucan given with or without antibiotics protected mice against anthrax infection.[16] A dose of antibiotics along with oral whole glucan particles (2 mg/KG body weight or 20 mg/KG body weight) for eight days prior to infection with Bacillus anthracis protected mice against anthrax infection over the 10-day post-exposure test period. Mice treated with antibiotic alone did not survive.

A second experiment was conducted to investigate the effect of yeast β-glucan orally consumed after exposure of mice to B. anthracis. The results were similar to the previous experiment with an 80-90% survival rate for mice treated with β-glucan, but only 30% for the control group after 10-days of exposure.

Specific hematopoietic activity was first demonstrated with β-glucan in the mid-1980s in an analogous manner as granulocyte monocyte–colony stimulating factor (GM-CSF).[17] Research was carried out initially with particulate β-glucan and later with soluble β-glucans, all of which were administered intravenously to mice.[18][19][20] Mice exposed to 500-900 cGy (500-900 mrads) of gamma radiation exhibited a significantly enhanced recovery of blood leukocyte, platelet and red blood cell counts when given i.v. β-glucan.[21] Other reports showed that β-glucan could reverse the myelo-suppression produced with chemotherapeutic drugs such as fluorouracil,[15] carboplatinum or cyclophosphamide.[22] Moreover, the anti-infective activity of β-glucan combined with its hematopoiesis-stimulating activity resulted in enhanced survival of mice receiving a lethal dose of 900-1200 cGy of radiation.[13] In vitro studies showed that β-glucan could enhance granulocyte and megakaryocyte colony formation by hematopoietic stem progenitor cells when used in combination with GM-CSF and interleukin-3 (IL-3), respectively.[23]

Early research by Onderdonk et al.[29] investigated the ability of yeast b-glucan to reduce septic infections using in vivo models. Onderdonk et al. found that mice challenged with E. coli or S. aureus bacteria were protected against septic infections when they were injected with PGG-glucan 4–6 hours prior to infection. Work by Kernodle et al. demonstrated that preventative dosing of yeast β-glucan prior to infection with S. aureus prevented sepsis in a guinea pig model.[30] Research has been conducted in animals on the use of yeast β-glucans for the treatment and prophylaxis of bacterial sepsis[29][30][31] and protection against oxidative organ injury.[32]

In a prospective, randomized, double-blind study, 38 trauma patients received an I.V. of a soluble yeast derived glucan for 7 days or placebo. The total mortality rate was significantly less in the glucan group (0% vs. 29%). There was also a decrease in septic morbidity (9.5% vs. 49%).[33]

Yeast derived beta glucan significantly enhanced phagocytic activity in an experimental mouse model of sepsis induced by C. albicans and midline laparotomy. The non-operated mice on glucan had a 100% survival vs. 73% in the surgical group.[34]

This disease is caused by an IgE-mediated allergic inflammation of the nasal mucosa. Orally-administered yeast-glucan decreased levels of IL-4 and IL-5 cytokines responsible for the clinical manifestation of this disease, while increased the levels of IL-12.[35]

Using paramagnetic resonance spectroscopy, yeast-derived glucan was found to cause decline in oxidative tissue damage during the progress of arthritic diseases, suggesting the role in treatment of arthritis.[36]

Influence of certain cereals (barley, oats) and edible mushrooms upon decrease of levels of serum cholesterol and liver low-density lipoproteins, leading to lowering of atherosclerosis and cardiovascular disease hazards, is also mediated by β-glucans.[37] It is known that cereals, mushrooms and yeast facilitate bowel motility and can be used in amelioration of intestinal problems, particularly obstipation.[38][39] Non-digestible b-glucans, forming a remarkable portion of these materials, are also able to modulate mucosal immunity of the intestinal tract.[40]

For maximal absorption, oral β(1,3)-D-glucan should be taken on an empty stomach. Enterocytes reportedly facilitate the transportation of β(1,3)-glucans and similar compounds across the intestinal cell wall into the lymph where they begin to interact with macrophages to activate immune function.[41] Radiolabeled studies have verified that both small and large fragments of beta glucans are found in the serum, which indicates they are absorbed from the intestinal tract.[42] M cells within the Peyer’s Patches physically transport the insoluble whole glucan particles into the gut-associated lymphoid tissue.[24]

β-D-glucan (properly known as (1→3)β-D-glucan, but also incorrectly called 1,3-β-D-glucan or even just glucan) forms part of the cell wall of certain medically important fungi, especially Aspergillus and Agaricus species. An assay to detect the presence of (1→3)β-D-glucan in the blood has been produced by Associates of Cape Cod called Fungitell and is marketed as a means of diagnosing invasive fungal infection in patients.[43][44][45]