Mozart and the Wolf Gang

Mozart and the Wolf Gang 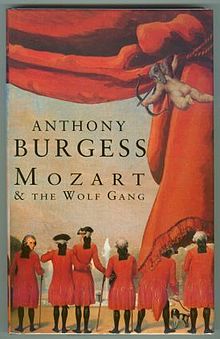 Mozart and the Wolf Gang is a 1991 novel by Anthony Burgess about the life and world of Wolfgang Amadeus Mozart.

Among other things, it attempts to fictionalize Mozart's Symphony No.40.

The book is one of a group of Burgess novels with musical themes, the others being Napoleon Symphony: A Novel in Four Movements, which is built around Beethoven’s Symphony No. 3, A Clockwork Orange, in which Beethoven's Symphony No. 9 features prominently, and The Pianoplayers, about the music hall era.

In the same year, 1991, that he published the novel, Burgess brought out a work on the composer entitled On Mozart: A Paean for Wolfgang, Being a Celestial Colloquy, an Opera Libretto, a Film Script, a Schizophrenic Dialogue, a Bewildered Rumination.