The Twin Lakes Library System is a single-county public library system that services the citizens of Milledgeville and BaldwinCounty, Georgia with two facilities. The library system provides the public access to books, movies, music, periodicals, and computing access at both facilities.

Planned to be a place of "recreation, inspiration, and information," then Mayor George S. Carpenter commented, "the time has come when Milledgeville must plan for the future if she expects to grow and remain a progressive city." With a $25 monthly appropriation toward the establishment and maintenance of the library by the City, plans were earnestly made to provide Milledgeville with its first public library.

In 1938 Mr. Julian Stanley offered a vacant building that he owned located on Hancock Street, the Elks Building, as the home for the new library and assisted in the renovation process. On January 18, 1938 the library opened its door to the public as The Baldwin County Library. Within the first year of operation, the Baldwin County Library had the largest circulation of books in its area with a total circulation of 1,388.

In July 1948, the Board of Trustees unanimously adopted a constitution and by-laws and the library purpose was made clear. The Library's purpose was established to be "the furnishing of complete library service to the people - adult and juvenile - of this county," and that "all services rendered by the library shall be free to the residents of Baldwin County."

Funded by cashing in bonds, in 1953 the library moved from its location on Hancock Street to the first floor of the Veterans' Building. As early as the 1950s the library sought to expand into a regional library. Needing larger space to house the facility, a letter was drafted to Carl Vinson, chairman of the armed services committee, asking for assistance. Although the proposition appealed to Mr. Vinson, the project of becoming a regional library did not come to fruition at that time. However, in 1958 the Baldwin County Library became a part of Middle Georgia Regional Library System. In 1961, Carl Vinson secured the county's old post office as a new building for the library. For his generosity, the Board of Trustees changed the name of the headquarters of the Baldwin County Library on June 15, 1961 to the Mary Vinson Memorial Library in honor of Congressman Vinson's late wife.

By the 1980s increased circulation and other library services forced the need for a larger space. After many proposals it was agreed that a new library had to be built. The new 18,900 square foot (1,790 m2) two-story building, the library's current location, opened in 1987. As of 2010 the library has a separate children's, young adult, and local history area for its patrons. In addition to the physical expansion, the library updated its catalog system. Carter Nipper, a former library employee, designed AUTOLIB, the library's first automated catalog. This was the first computerized library catalog available to library patrons.

After 43 years under the Middle Georgia Library System, the Mary Vinson Memorial Library became the headquarters for a new library system, the Twin Lakes Library System in July 2001. On May 30, 2003, the Twin Lakes Library System added a branch library, the Lake Sinclair Library, to serve patrons on the north side of town. On October 10, 2008 the System added its third branch facility, the Floride Allen Library, located in the Wray Housing Facility of the Milledgeville Housing Authority. The Floride Allen Library closed on February 23, 2011 in response to state budget cuts.

The Twin Lakes System is a Georgia public library and a member of the Public Information Network for Electronic Services (PINES), which connects its libraries' collections through the PINES online catalog. Patrons who possess a PINES library card can place holds, renew items, and see what the other 275+ member libraries have available in their collections, as well as check out materials from any PINES member library.

Locations and hours of operation

The Mary Vinson Memorial Library building is an 18,900 square foot, (1,790 m2) two-story structure located at 151 South Jefferson Street and across Greene Street from the north gates of Georgia Military College (formerly the State Capitol building). It can seat more than 200 people; it has a separate children's area, including an amphitheater complete with a built-in puppet stage; and a recently renovated genealogical and historical reading room and wireless public internet access. 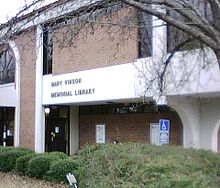 The Lake Sinclair Library building is in a 2,500 square foot (237 m2) storefront unit of the Riverside Plaza shopping center located at 3061 North Columbia Street on Highway 441 North near Lake Sinclair. It has a children's area, a wireless public Internet facility, and reading and study areas. 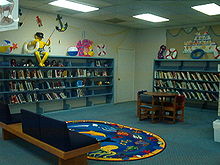 The following services are provided at each of the Twin Lakes Library System facilities:

The following services are only available at the Mary Vinson Memorial Library:

"Information resources made accessible for all."

"The Mission of the Twin Lakes Library System is to improve and enhance the educational, the cultural and the recreational life of the communities served."

"The Twin Lakes Library System's mission is to improve and enhance the educational, cultural and recreational life of the communities served in order to increase the intellectual potential of the community. The System does this by promoting access to information, offering innovative programs and providing well-trained staff."

"In the Stacks with Barry & LaToya"

"In the Stacks" logo 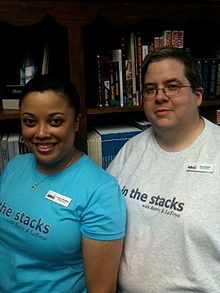 "In the Stacks with Barry & LaToya" promotional photo.

On June 10, 2010, the first episode of the Twin Lakes Library System's podcast "In the Stacks with Barry & LaToya" was produced. Hosted by library Director, Barry Reese and Assistant Director, LaToya Davidson, the podcast showcases their viewpoints on news, entertainment, books, and other issues. Guests are invited to participate in trivia for prizes, as well as receiving a gift button declaring "I got caught In the Stacks with Barry & LaToya."