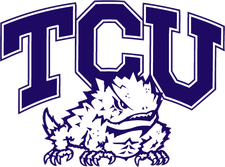 features 18 varsity sports teams. The school's mascot is the and its women's athletics teams are referred to often as the Lady Frogs. They participate in the NCAA's Division I and in the Div I-Bowl Sub-Division for football competing in the . The University's current athletic director is Dr. Daniel Morrison.

Texas Christian University began its athletic life as an independent program with a six-year (1914-1920) stint in the before eventually joining its longtime home, the (SWC), in 1923. TCU remained a member of the SWC until it disbanded after the 1994-1995 academic year because of Texas, Texas A&M, Texas Tech and Baylor defecting to the to form the .The Horned Frogs, without a conference to call home after 72 years, joined the (WAC), along with SMU and Rice. TCU called the WAC home from 1996 through 2000. In 2001, TCU joined (C-USA) and remained there through 2004. TCU joined its current home of the Mountain West Conference (MWC) in 2005.

TCU has 36 1st team All-Americans, listed at . The school's most famous past players include , , (a winner, and namesake of the Davey O'Brien National Quarterback Award), (later one of the most celebrated coaches of the ), , , , , , , and 2006-07 . TCU's most successful head coaches include Matty Bell, L.D. "Dutch" Meyer, , , and current coach . Matthews, Baugh, O'Brien, Aldrich, Lester, Swink, Lilly, and are all members of the . Baugh and Lilly are also members of the .

TCU has fielded a baseball team since 1896, before the school found its home in . The Horned Frog baseball team began playing baseball in the when it became a member of the conference in 1923

TCU Men's Basketball has played since the 1908-1909 season. That first year they entered the City League and left with a record of 2-3, losing to the Baylor teams and defeating the Waco High teams.

The TCU Men's Basketball Team was coached from 2002 to 2007 by . He was fired in March, 2008, after TCU limped through yet another season with a losing record. Jim Christian, formerly with Kent State, was hired shortly after Dougherty was fired.

The TCU Men's Basketball Team plays their home games in on the campus of TCU.

The Lady Frogs sported their first women's basketball team in the 1977-78 season, in which TCU boasted a 5-18 record. The Lady Frogs improved significantly in the following year, going 19-8. Current coach has been the coach of the team since the 1999-00 season. During the 2000-01 season, the Lady Frogs won their first regular season and conference championship at the WAC Tournament. The Lady Frogs would match that accomplishment the very next season their first season in during the 2001-2002 season. They then proceeded to win the C-USA tournament in 2002-03 and 2004-05. Of the four years the Lady Frogs were in C-USA, they would win the conference title 4 out of 5 years. [ [http://graphics.fansonly.com/photos/schools/tcu/sports/w-baskbl/auto_pdf/05-06_wbbmg_history.pdf 2005-06 TCU Women's Media Guide] p. 136]

TCU has also reached the Women's NCAA Tournament for an outstanding six consecutive years, stretching back to the 2000-01 season. Each year, the Lady Frogs have won their first game of the tournament and lost the second game, except for a first-round loss to Oregon in 2005.

The Lady Frogs also share with the men's team, playing under the roof there for the entire history of the program.

The TCU Women's Volleyball Team is coached by who joined the team in February 2002. In 2002, the volleyball team accomplished the 3rd best record to date at 12-18.

The Women's Volleyball Team plays their home games in the Student Recreation Center on the campus of TCU.

In December 2005 it was announced that starting in the 2006-2007 academic year women's equestrian would become a varsity sport sponsored by TCU. The NCAA designated equestrian as an emerging sport in 1998, and there are currently 23 intercollegiate programs in NCAA Division I and II. Programs in the region include Baylor, Kansas State, Oklahoma State, SMU, Stephen F. Austin, Texas A&M and West Texas A&M. Intercollegiate equestrian programs support an average of 70 student-athletes.

The TCU Men’s Golf team is led by 20-year Head Coach . During his tenure, Coach Montigel guided the Men’s Golf Team to five consecutive conference titles from 2001-2005 between the Horned Frog’s time in the WAC and MWC. Since 1990, the Horned Frogs have qualified as a team to the NCAA South Central Regional every year. In ten of those years, the team moved on to the NCAA Championships. One of the most notable TCU Men’s Golf Alumnus is who was a member of the United States team during the . The TCU golf team practices at the Colonial Golf & Country Club.

In 1983, the TCU Women's Golf team accounted for the school's lone national championship outside of football. Currently the women's golf team is led by Head Coach . The Horned Frogs have at least four former players now playing professionally: , , and . TCU practices at the Colonial Country Club.

The TCU Tennis teams play their home matches at the [http://gofrogs.cstv.com/facilities/tcu-facil-tennis.html] , rated the #1 facility in the nation by .

The TCU Men's Tennis team is coached by . Before he became coach of the men's team, Coach Borelli coached the TCU Women's Tennis team four years before. [ [http://gofrogs.cstv.com/sports/m-tennis/mtt/borelli_dave00.html Player Bio:Dave Borelli] ] They are the 2005-2006 Tournament Champions.

The TCU Women's Tennis team is coached by . They are the 2005-2006 regular season and tournament champions.

The Horned Frog first appeared in 1897 on the cover of the first AddRan yearbook. By 1915, the mascot made its way onto the first TCU seal. During the post-WWII years, the Horned Frog Mascot was embraced in costume, on stationery, class rings and the band's bass drum. In 1979 the mascot was renamed from "Addy the All-American Frog" to "". [ [http://www.magazine.tcu.edu/articles/2001-03-CV3.asp TCU Magazine] "Frog of Ages" Fall 2001.]

TCU has capitalized on its mascot by marketing a bumper sticker (in a role reversal of where a frog, once kissed, turns into a prince) stating "My Princess Turned into a Frog".