An overlock stitch sews over the edge of one or two pieces of cloth for edging, hemming or seaming. Usually an overlock sewing machine will cut the edges of the cloth as they are fed through (such machines are called ‘sergers’ in North America), though some are made without cutters. The inclusion of automated cutters allows overlock machines to create finished seams easily and quickly. An overlock sewing machine differs from a lockstitch sewing machine in that it uses loopers fed by multiple thread cones rather than a bobbin. Loopers serve to create thread loops that pass from the needle thread to the edges of the fabric so that the edges of the fabric are contained within the seam. Overlock sewing machines usually run at high speeds, from 1000 to 9000 rpm, and most are used in industry for edging, hemming and seaming a variety of fabrics and products. Overlock stitches are extremely versatile, as they can be used for decoration, reinforcement, or construction.

Overlocking is also referred to as “overedging”, “merrowing” or “serging”. Though “serging” technically refers to overlocking with cutters, in practice the four terms are used interchangeably. 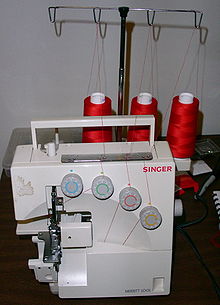 Overlock stitching was invented by the Merrow Machine Company in 1881.

J. Makens Merrow and his son Joseph Merrow, who owned a knitting mill established in Connecticut in 1838, developed a number of technological advancements to be used in the mill’s operations. Merrow's first patent was a machine for crochet stitching. Merrow still produces crochet machines based on this original model. This technology was a starting point for the development of the overlock machine, patented by Joseph Merrow in 1889. Unlike standard lockstitching, which uses a bobbin, overlock sewing machines utilize loopers to create thread loops for the needle to pass through, in a manner similar to crocheting. Merrow's original three-thread overedge sewing machine is the forerunner of contemporary overlocking machines. Over time, the Merrow Machine Company pioneered the design of new machines to create a variety of overlock stitches, such as two, and four-thread machines, the one-thread butted seam, and the cutterless emblem edger.

Throughout the early 19th Century the areas of Connecticut, USA and New York USA were the centers of textile manufacturing and machine production. Consequently many overlock machine companies established themselves in the Northeastern United States.

In 1964 Juki Corporation was formed; a precursor of the modern industrial overlock sewing machine company. Throughout the 1980s Japanese and Chinese sewing machine production came to dominate the industry.

Overlock stitches are classified in a number of ways. The most basic classification is by the number of threads used in the stitch. Industrial overlock machines are generally made in 1, 2, 3, 4, or 5 thread formations. Each of these formations has unique uses and benefits:

Adding extra variation in stitch types is the ‘differential feed’ feature, which allows feed to be adjusted; extra-fast feed creates a ruffled or ‘lettuce-leaf’ effect. Finally, some merrowing machines contain parts to roll the fabric edge into the stitch for added durability.

The formation of an overlock stitch

Uses of the overlock stitch

Overlock stitches are traditionally used for edging and light seaming. Other applications include: