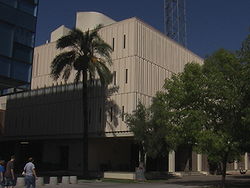 Stauffer Hall, the former home of the Cronkite School

The Cronkite School began as the Division of Journalism under the ASU's English Department in 1949, 18 years after ASU began to offer journalism courses to its students, in 1931[1]. The school began to expand in 1954, when radio and television journalism courses were made available[1]. The entire Division of Journalism was elevated to department by the University in 1957, and changed its name to Department of Mass Communication[1]. The school moved from its original location at Old Main to what is now the Academic Services building at ASU Tempe in 1969.

In 1974 the school received its national accreditation and moved into the Stauffer Hall building[1]. The school was later renamed Department of Journalism and Telecommunication and became a part of the new College of Public Programs in 1979[1]. Stauffer Hall would serve as the school's home until August 2008, when the school moved to its current location in Downtown Phoenix.

In 1981, the Cronkite School began to offer master's degrees to its students. A year later, the school established a student radio station, The Blaze, as a place for prospective students to mature their skills[1] (The State Press used to fulfill that role, but it became independent in the '70s). In 1984, the school was renamed Walter Cronkite School of Journalism and Telecommunication in honor of the veteran news reporter. At the same time, the Walter Cronkite Award for Journalism Excellence was established.

In 1989, a professional news program produced by the school's students began production, and later evolved into the well-known Cronkite NewsWatch TV news program[1].

In 2001, the school voted to change its name to Walter Cronkite School of Journalism and Mass Communication[1]. The school received independent school status in 2004. The school chose Christopher Callahan as its founding dean in 2005[1]. A year later, the school established the Cronkite News Service for advanced journalism students to distribute TV and print stories to various professional media[1].

In 2010, the school won an International Architecture Award.The awards were presented and exhibited at ‘The City and The World conference’ in Spain, from November 4–7, 2010.[3] 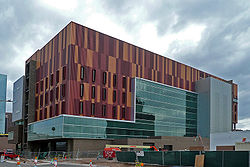 The new building at the Downtown Campus

When the Cronkite School received independent school status in 2004, plans were made to transfer the school to a newly planned campus in Downtown Phoenix. A ceremony marking the start of construction was held in early 2007, with construction being completed in mid-2008. The school moved into its state-of-the-art facility in Downtown Phoenix in August 2008, and officially dedicated the new building, and celebrated its 25th anniversary, in November of that year[4]

The new six-story, 225,000 sqf, 110-foot tall, LEED Silver building has become an integral part of the fabric of ASU’s downtown campus. Delivered in a design-build, fast-track method, work began on design in October 2006 and the school opened its doors in August 2008, 22 months later. The new building was designed by HDR, Inc. and Steven Ehrlich Archits. Sundt Construction was responsible for construction[5]

The school has moved away from the traditional academic structure of hiring only tenured professors. In addition it hires veteran journalists like Downie, Brown and Gillmor to be professors of Practice and also draws practicing journalists from the Phoenix area as adjuncts who teach many of its courses.

NewsWatch is the full-service television station and nightly thirty-minute news program produced entirely by students at the Cronkite School and began in 1989. The program airs four nights a week on the local PBS affiliate KAET.

NewsWatch en Español is the Spanish-language edition of the program which airs Sunday mornings on the local Telefutura affiliate KFPH-CA - sister station of the local Univision affiliate.

When the school moved into its new downtown-facility, NewsWatch began broadcasting the nightly news program entirely in high definition and moved into a new studio on the top floor of the building - housing a news set and control room designed for high definition. A traditional three camera format is used on the at the anchor desk, weather center, one of the largest green screens - all of which back onto a working newsroom, assignment desk and outdoor terrace for live reports.

The program airs stories from the school's Cronkite News Service which is a broadcast wire service that provides its content to local print, online and broadcast news outlets across Arizona.

The Cronkite School houses the national headquarters of the News21 Initiative and the Reynolds Center for Business Journalism. It is also home to the Knight Center for Digital Media Entrepreneurship.

Bachelor of Arts in Journalism and Mass Communication (B.A.)

The first two semesters of a Cronkite student's academic career focus on general understanding of journalism practices, and principles, such as a history and principles of journalism course, a rigorous grammar for journalists course, and a demanding class on news reporting and writing.[6]

Doctor of Philosophy in Journalism and Mass Communication (Ph.D.)

The school launched a Ph.D. program in journalism and mass communication that will launch in August 2011.