Moses Schreiber, known to his own community and Jewish posterity as Moshe Sofer, also known by his main work Chasam Sofer, (trans. Seal of the Scribe and acronym for Chidushei Toras Moshe Sofer), (1762–1839), was one of the leading Orthodox rabbis of European Jewry in the first half of the nineteenth century. He was a teacher to thousands and a powerful opponent to the Reform movement, which was then making inroads into many Jewish communities in Austria-Hungary and beyond. As Rav of the city of Bratislava, he maintained a strong Orthodox Jewish perspective through communal life, first-class education, and uncompromising opposition to Reform and radical change.[1]

The Chasam Sofer established a yeshiva in Bratislava which became the most influential yeshiva in Central Europe, producing hundreds of future leaders of Hungarian Jewry.[2] This yeshiva continued to function until World War II; afterwards, it was relocated to Jerusalem under the leadership of the Chasam Sofer's great-grandson, Rabbi Akiva Sofer (the Daas Sofer).

The Chasam Sofer is an oft-quoted authority in Orthodox Jewish scholarship. Many of his responsa are required reading for semicha (rabbinic ordination) candidates. His Torah chiddushim (original Torah insights) sparked a new style in rabbinic commentary, and some editions of the Talmud contain his emendations and additions.

At the age of nine, Moses entered the yeshiva of Rabbi Nathan Adler (1741–1800, d. 27 Elul 5560) at Frankfurt. At the age of thirteen, he began to deliver public lectures. His knowledge was so extraordinary that Rabbi Pinchas Horowitz of Frankfurt asked him to become his pupil. He agreed, but remained under Rabbi Horowitz for only one year, and then left in 1776 for the yeshiva of Rabbi David Tebele Scheuer (1712–1782, d. Shmini Atzeres 5543) in the neighboring city of Mainz, which gladly welcomed him. There he studied under its Rosh Yeshiva Rabbi Mechel Scheuer (1739-1810 d. 27 Shevat 5570) son of Rabbi Tebele during the years 1776 and 1777 until he yielded to the entreaties of his former teachers in Frankfurt and returned to his native city. In Mainz many prominent residents took an interest in his welfare and facilitated the progress of his studies. In addition to his vast Talmudic knowledge, he was also proficient in astronomy, geometry, and history.

In 1782 Rabbi Nathan Adler was called to the rabbinate of Boskovice, Moravia and Rabbi Sofer followed him. He went, at Rabbi Adler's advice, to Prostějov, Moravia, where on 6 May 1787 he married Sarah,[3] the daughter of the deceased rabbi of Prostějov, Rabbi Moses Jerwitz (d. 1785). Rabbi Moses Sofer became a member of the Chevra Kadisha (Shu"t Chasam Sofer, Y"D:327) and eventually became head of the yeshiva there.

In 1794, Sofer accepted his first official position, becoming Rabbi of Strážnice, after he had procured the sanction of the government to settle in that town. In 1797 he was appointed Rabbi of Mattersdorf (currently Mattersburg, Austria); one of the seven communities (known as the Siebengemeinden or Sheva kehillot) of Burgenland. There he established a yeshiva, and pupils flocked to him. His prime pupil in Mattersdorf, was the future Gaon Rabbi Meir Ash (Maharam Ash) (1780–1852), Rabbi of Uzhhorod.

He declined many offers for the rabbinate, but in 1806 accepted a call to Bratislava, Austrian Empire (now capital of Slovakia). In Bratislava, he established a yeshiva, which was attended by as many as 500 pupils. Hundreds of these pupils became the rabbis of Hungarian Jewry. Among them were:

Fight against changes in Judaism 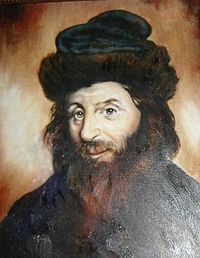 Painting of the Chasam Sofer.

The Chasam Sofer led the community of Bratislava for 33 years until his death in 1839. It was his influence and determination that kept the Reform movement out of Bratislava.

From the late 18th century onwards, movements which eventually developed into Reform Judaism began to progress. Synagogues subscribing to these new views began to appear in centres such as Berlin and Hamburg. Sofer was profoundly opposed to the reformers and attacked them in his speeches and writings. For example in a responsum of 1816 he forbade the congregation in Vienna to allow a performance in the synagogue of a cantata they had commissioned from the composer Ignaz Moscheles because it would involve a mixed choir. In the same spirit he also contested the founders of the Reformschule (Reform synagogue) in Bratislava, which was established in the year 1827.

In response to those who stated that Judaism could change or evolve, Sofer applied the motto Hadash asur min ha-Torah (חדש אסור מן התורה), "Innovation (of the Torah) is forbidden by the Torah", (homelitically based on the Biblical law, in Leviticus 23:14, that new grains are forbidden to be used before Passover, see Yoshon). For Sofer, Judaism as previously practiced was the only form of Judaism acceptable. In his view the rules and tenets of Judaism never changed — and cannot ever change. This became the defining idea for the opponents to Reform, and in some form, it has continued to influence Orthodox response to innovation in Jewish doctrine and practice.[6]

With his second wife, the Chasam Sofer had seven daughters and three sons. The latter were: Rabbi Avrohom Shmuel Binyamin Sofer(known as the Ksav Sofer); Rabbi Shimon Sofer (known as the Michtav Sofer), who became the Rav of Kraków; and Rabbi Joseph Yuzpa Sofer.[7] His sons and daughters produced a line of respected Torah scholars who were named along the lines of Chasam Torah — as, for instance, the Shevet Sofer (his son's son), the Daas Sofer (his grandson's son), and the Chasan Sofer (his daughter's son, whose name is an acronym for Chiddushei Toras Neched Sofer, "Torah Insights of the Grandson of Sofer"). The Chasam Sofer and his family lived on the bottom of Zamocka Street where the Hotel Ibis is now located.

Many synagogues and yeshivas worldwide bear the name and follow the legacy of the Chasam Sofer. Notable among them are the Pressburg institutions in London, England, headed by his descendant, Rabbi Shmuel Ludmir (who has published much of his work),[8] and the yeshiva and institutions of the Erlau dynasty in Israel, headed by his direct descendant, Rabbi Yochanan Sofer. The Institute for Research of the Teachings of the Chasam Sofer, founded by Rabbi Yochanan in Jerusalem, Israel, researches and deciphers handwritten documents penned by the Chasam Sofer, his pupils and descendants and has printed hundreds of sefarim. The Erlau community is Hasidic-style, though strictly follows to the Ashkenaz customs as did the Chasam Sofer.

Interior of the memorial (the grave of the Chasam Sofer is at the left).

A modern Jewish memorial, containing Moses Sofer's grave and those of many of his associates and family, is located in Bratislava. It is situated underground below Bratislava Castle at the left bank of the Danube). The nearby tram station is named after him.

The preservation of these graves has a curious history. The Jewish cemetery in Bratislava was confiscated during the regime by the anti-Semitic ruler catholic priest Jozef Tiso in 1943 to build a roadway. Negotiations with the regime enabled the community to preserve the section of the cemetery including the Chasam Sofer's grave, enclosed in concrete, below the surface of the new road. The regime complied either as a consequence of a large bribe (according to one story), foreign pressure (according to another story), or for fear of a curse if the graves were destroyed (according to yet another story).

Following the declaration of independence by Slovakia in 1992, new negotiations were undertaken to restore public access to the preserved graves. In the mid-1990s, the International Committee for Preservation of Gravesites of Geonai Pressburg was formed to support and oversee relocation of tram tracks and building of a mausoleum. In 1999, a Memorandum of Understanding was signed between the then-mayor of Bratislava Jozef Moravčík, Chairman of the Committee Romi Cohn and Chairman of the Bratislava Jewish Religious Community Peter Salner. Construction of the mausoleum was completed after overcoming numerous technical and religious issues and opened on July 8, 2002. Access to the mausoleum can be arranged through the local Jewish community organisation.