City Lights is a 1931 American silent film and romantic comedy-drama written by, directed by, and starring Charlie Chaplin. It also has the leads Virginia Cherrill and Harry Myers. Although "talking" pictures were on the rise since 1928, City Lights was immediately popular. Today, it is thought of as one of the highest accomplishments of Chaplin's prolific career. Although classified as a comedy, City Lights has an ending widely regarded as one of the most moving in cinema history.

The officials of a city are dedicating a new statue, but when it is unveiled, Chaplin's Tramp is discovered sleeping on it. He is chased off by the crowd. Destitute and homeless he wanders the streets, getting tormented by two newsboys. He happens upon a blind Flower Girl (Virginia Cherrill), and buys a flower. Just when she is about to give him his change, a man gets into a nearby car and drives away, making her think the Tramp has driven off. The Tramp doesn't correct her and slinks away. The Flower Girl returns home to her simple life with her grandmother (Florence Lee).

Returning to the Flower Girl's apartment, the Tramp spies her being attended by a doctor. He decides to take a job to earn money for her, and becomes a street-sweeper, managing to annoy his new coworker. Meanwhile, the grandmother receives a notice that she and the Flower Girl will be evicted if they cannot pay their back rent, but hides it and goes out to beg. The Tramp visits the Flower Girl on his lunch break, and sees an ad for an operation that cures blindness. He then finds the notice and promises the Girl he will pay it. But he returns to work late and is fired. Dejected, he passes a boxing venue, where a fighter convinces him to spar with him, throw the fight, and they'll split the prize money. But the fighter turns out to be a fugitive from justice and flees, leaving the Tramp to fight a no-nonsense replacement. Despite a valiant effort, the Tramp is thrashed. He meets the drunken millionaire again, who takes him to the mansion and gives him $1000 for the Girl. But two burglars sneak in and clobber the millionaire, and when he comes to, he accuses the Tramp of stealing. The Tramp narrowly escapes the police, delivers the money to the Girl, and promises to return, but he is picked up by the police and thrown in jail.

Several months later, he is wandering the streets again. Searching for the girl, he returns to her original street corner, but she is not there. With her sight restored, the girl has opened up a flower shop with her grandmother. When a rich man comes into the shop, the girl wonders if he is her mysterious benefactor. The Tramp, in ragged clothes and tormented by the same newsboys, suddenly finds himself staring at her through the window. She jokes to her colleague that she has "made a conquest". Seeing a flower falling apart in his hand, the girl offers him one of hers and a coin. The Tramp begins to leave, then reaches for the flower. The girl takes hold of his hand to place the coin in it and, feeling him, she realizes who he is. "You?" she says, and he nods, asking, "You can see now?" She replies, "Yes, I can see now" and holds his hand to her heart. The film closes on Chaplin smiling back at her.

As in other Chaplin movies, each scene has an element of slapstick in it, using the comic scenes in a symbolic way. The opening scene uses funny sounds to depict the important mayor and his wife who are smiling and talking emphatically before the crowd. The revelation of the monument before the acting crowd, is actually the revelation of the tramp, the well-known Charlie Chaplin, before the movie-going crowd.

The Tramp, in every scene, barely escapes disaster of which he is completely unaware.[1] Via the comic scenes, the Tramp is shown to be short, dirty and sloppy. His life is contrasted with good food, clean clothing, a large house, and comfortable and clean chairs, couches and beds. He is shown to be fearful of looking at or even dreaming of a better life.

In each encounter with the blind girl, she unknowingly manages to bash the Tramp, throwing water in his face, dropping a flower pot on his head etc. He also shows the hardships and many times unbearable conditions of the lower class, via comedy, when the Tramp chooses to sweep the streets or sets himself up in the boxing ring. In the final scene, he happens to look in to the flower store, in a clear analogy to part of the opening scene where he is afraid to peer at the model doll of a woman in a dress shop.

Slapstick is also used to show how the Tramp unknowingly insults and sometimes openly attacks various institutions and people, from mocking the mayor and police to bashing the stuck up butler or the snoopy neighbor.

Chaplin's feature The Circus, released in 1928, was his last film before the motion picture industry embraced sound recording and brought the silent movie era to a close. As his own producer and distributor (part owner of United Artists), Chaplin could still conceive City Lights as a silent film. Technically the film was a crossover, as its soundtrack had synchronized music, sound effects, and some unintelligible sounds that copied speech pattern films. The dialogue was presented on intertitles.[2]

As a filmmaker, Chaplin was known for being a perfectionist; he was notable for doing many more "takes" than other directors at the time. At one point he fired Virginia Cherrill and began re-filming with Georgia Hale, Chaplin's co-star in The Gold Rush. This proved too expensive, so he re-hired Cherrill to finish City Lights. (Approximately seven minutes of test footage of Hale survives and is included on the DVD release; excerpts were first seen in the documentary Unknown Chaplin along with an unused opening sequence from the film.) When Chaplin completed the film, silent films had become generally unpopular. But City Lights was one of the great financial and artistic successes of Chaplin's career, and it was his personal favorite of his films. Especially fond of the final scene, he said, "[I]n City Lights just the last scene … I’m not acting …. Almost apologetic, standing outside myself and looking … It’s a beautiful scene, beautiful, and because it isn’t over-acted."[3]

The film score of City Lights includes several themes from popular melodies, with other melodies composed by Chaplin and arranged and orchestrated by Arthur Johnston and Alfred Newman.[1] The main theme used as a leit motif for the blind flower girl[4] is the song La Violetera (Who’ll buy my Violets)[5] from Spanish composer José Padilla.[1] Chaplin unsuccessfully tried to secure the original song performer Raquel Meller in the lead role, but used her song anyway as a major theme.[6][7] Chaplin lost a lawsuit to Padilla (which took place in Paris, where Padilla lived) for not crediting him.[8] [9]

Some modern editions released for video include a new recording by Carl Davis.[10] 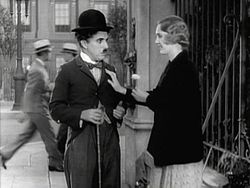 Chaplin was nervous about reception of the film because by this time, silent films were becoming obsolete; Hollywood switched to sound films by the end of 1929. The film was enthusiastically received by Depression-era audiences, earning $5 million during its initial release,[11] and became one of Chaplin's most financially successful and critically acclaimed works. In 1949, the critic James Agee wrote in Life magazine, that the final scene was the "greatest single piece of acting ever committed to celluloid."[12] The film was re-released in 1950.

Several well-known directors have praised City Lights. Orson Welles said it was his favorite film. In a 1963 interview in the American magazine Cinema, Stanley Kubrick rated City Lights as fifth among his top ten films.[13] In 1972, the renowned Russian director Andrei Tarkovsky placed City Lights as fifth among this top ten and said of Chaplin, "He is the only person to have gone down into cinematic history without any shadow of a doubt. The films he left behind can never grow old."[14]

George Bernard Shaw called Chaplin "the only genius to come out of the movie industry".[15] Celebrated Italian director Federico Fellini often praised this film and his Nights of Cabiria refers to it. In the 2003 documentary Charlie: The Life and Art of Charles Chaplin, Woody Allen said it was Chaplin's best picture. Allen is said to have based the final scene of his 1979 film Manhattan on the final scene of City Lights.[12]

In 1992, the Library of Congress selected City Lights for preservation in the United States National Film Registry as being "culturally, historically, or aesthetically significant." In 2007, the American Film Institute's tenth anniversary edition of "100 Years...100 Movies" ranked City Lights as the eleventh greatest American film of all time.

In 1952, Sight and Sound magazine issued the results of its first poll for "The Best Films of All Time" and City Lights was voted #2, after Vittorio DeSica's Bicycle Thieves.[16] In 2002, City Lights ranked 45th on the critics' list.[17] That same year, directors were polled separately and ranked the film as 19th overall.[18]

In June 2008, AFI revealed its "10 Top 10", the best ten films in ten "classic" American film genres, from a poll of more than 1500 people in the creative community. City Lights was voted the best film in the romantic comedy genre.[19]

The film has been studied and written about by American and international film critics and scholars. For example, French experimental musician and film critic Michel Chion has written an analysis of City Lights, published as Les Lumières de la ville. Slavoj Žižek used the film as a primary example in his essay, "Why Does a Letter Always Arrive at Its Destination?" (first chapter in Enjoy Your Symptom! Jacques Lacan in Hollywood and Out).

Charles Silver, Curator of Film at the Museum of Modern Art, states that the film is so highly regarded because it brought forth a new level of lyrical romanticism that did not appear in Chaplin's earlier works. He adds that like all romanticism, it is based in the denial of the real world around it. When the film premiered, Chaplin was much older, he was in the midst of another round of legal battles with former spouse Lita Grey and the economic and political climate of the world had changed. Chaplin uses The Girl's blindness to remind The Tramp of precarious nature of Romanticism in the real world as she unknowingly assaults him multiple times.[20]

Film.com critic Eric D. Snyder says that by 1931, most Hollywood filmmakers either embraced talking pictures, resigned themselves to their inevitability or just gave up making movies, yet Chaplin held firm with his vision in this project. He also notes that few in Hollywood had the clout to make a silent film at that late date, let alone do it well. One reason was that Chaplin knew The Tramp could not be adapted to talking movies and still work.[12]