The Kentucky Fried Movie is an American comedy film, released in 1977 and directed by John Landis. The film's writers were the team of David Zucker, Jim Abrahams and Jerry Zucker. This same team would go on to write and direct Airplane!, Top Secret! and the Police Squad! television series and its film spinoffs, The Naked Gun films. The "feature presentation" portion of the film stars Evan C. Kim and hapkido Grand Master Bong Soo Han. Among the numerous cameo stars were George Lazenby, Bill Bixby, Tony Dow, Donald Sutherland, and the voice of Shadoe Stevens. According to David Zucker in the DVD commentary track, David Letterman auditioned for the role of the newscaster, but was not selected. The film also features many former members of The Groundlings theater, as well as some from The Second City.

This film is number 87 on Bravo's "100 Funniest Movies", and is considered, along with The Groove Tube, to be one of the original groundbreaking pioneer films of the entire spoof and mockumentary genres of film making that followed it. The Kentucky Fried Movie marked the first film appearances of a number of actors who later became famous as well as being the vehicle that launched the careers of the Zucker brothers, Abrahams and Landis. It was Landis' work on this film that was largely responsible for him being recommended to direct National Lampoon's Animal House in 1978.[1]

David Zucker, Jerry Zucker, and Jim Abrahams made the rounds of the Hollywood studios and were rejected by all of them, being told that "audiences didn't like movies composed of sketches." Since the three believed in their material, which they had honed in front of the audiences in their 140-seat improvisational troupe billed as Kentucky Fried Theater, they decided to make the movie on their own.[2]

A wealthy real estate investor offered to finance the film if they would write a script. After completion of the screenplay, the investor had second thoughts and decided he did not want to finance the film alone. He said he would try to attract other investors if the three filmmakers would produce a ten-minute excerpt of the film, which he would finance. However, when the trio presented a budget of the short film to the investor, he backed out.[3]

However, the prospect of shooting the short film so excited the trio that they decided to pay for it themselves. The ten-minute film cost $35,000, and with it they again approached the Hollywood studios. This time they attached young director John Landis to the project. However, once again, the studios turned them down.[3]

Curious as to how audiences would react to their film, they persuaded exhibitor Kim Jorgenson to show it before one of his regularly scheduled movies. When Jorgenson saw the short, he "fell out of his seat laughing." He was so impressed that he offered to raise the money needed to make the full-length version. By having his fellow exhibitors screen the film before audiences in their theaters, he convinced them to put up the $650,000 budget. When released, Kentucky Fried Movie was a box-office success, returning domestic American rentals of $7.1 million.[3]

The Kentucky Fried Movie has no unified plot, instead consisting of numerous parody sketches the most common target of which is exploitation films. A spoof of early kung-fu films (primarily Enter the Dragon) titled A Fistful of Yen in imitation of A Fistful of Dollars, is the film's "feature presentation" and longest segment. Parodies of disaster films (That's Armageddon), blaxplotation (Cleopatra Schwartz) and softcore porn/women-in-prison films (Catholic High School Girls in Trouble) are presented as "Coming Attraction" trailers. The sketch See You Next Wednesday mocks theater-based gimmicks like Sensurround by depicting a pornographic film presented in "Feel-A-Round", which involves an usher physically accosting the patron. The fictional films portrayed are all produced by "Samuel L. Bronkowitz" (a conflation of Samuel Bronston and Joseph L. Mankiewicz).

The city of Detroit and its high crime rate are a running gag throughout the film, each reference jokingly portraying the city as a hell-on-Earth.

Some consider Amazon Women on the Moon to be a sequel to this movie, due to the similar style of the two films and John Landis' involvement as a director of a few sketches. Also because the 'feature' in Amazon Women On The Moon shows an opening credit as being a Samuel L. Bronkowitz production. This is also evident in the French title of the film The Cheeseburger Movie, while The Kentucky Fried Movie is The Hamburger Movie. Also, IMDB lists one of the film's working titles as "The Kentucky Fried Sequel."

The film's credits listed the sketches incorrectly, as the writers changed the order after the credits had been written. The following list is in the running order used in the film: Sketch Details 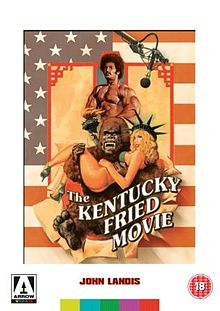 On July 4, 2011 Arrow Video in the United Kingdom released a 2-Disc Special Edition DVD, with the following Special Features: