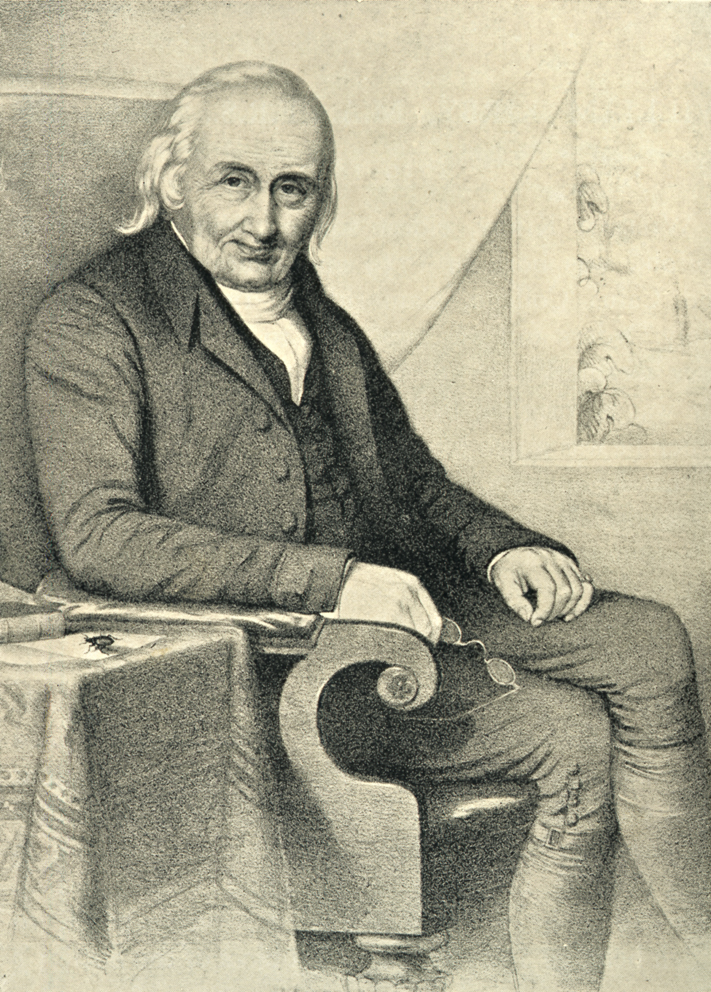 William Kirby (, &ndash; , ) was an English , an original member of the and a . He is considered the "founder of entomology".

Kirby was a grandson of the Suffolk topographer John Kirby (author of "The Suffolk Traveller") and nephew of artist-topographer (a friend of 's). He was also a cousin of the children's author Mrs . His parents were William Kirby, a solicitor, and Lucy Meadows. He was born at , , and studied at and , where he graduated in 1781. Taking holy orders in 1782, he spent his entire life in the peaceful seclusion of an English country parsonage at Barham in Suffolk. He assisted in the publication of pamphlets against during the 1790s.

Kirby was brought to the study of by Dr Nicholas Gwynn (a friend of 's), who introduced him to Dr Smith (Sir ) at in 1791. Soon afterwards he corresponded with Smith seeking advice in the foundation of a natural history museum at Ipswich. Among his early friends were the naturalists Charles Sutton and , with whom he made lengthy scientific excursions, as later with and others. His name appears on the original list of Fellows of the Linnean Society. He delivered the first of his many papers on 7 May 1793, on "Three New Species of Hirudo" ("Linn. Trans." II, 316).

Kirby produced his first major work, the "Monographia Apum Angliae" (Monograph on the s of England), in 1802. His purpose was both scientific and religious:

‘The author of is also the author of : and this visible world, by types indeed, and by symbols, declares the same truths as the Bible does by words. To make the naturalist a religious man – to turn his attention to the glory of God, that he may declare his works, and in the study of his creatures may see the loving-kindness of the Lord – may this in some measure be the fruit of my work…’ (Correspondence, 1800)

This, the first scientific treatise on English bees, brought him to the notice of leading entomologists in Britain and abroad. Extensive correspondence followed with scientists including Alexander MacLeay, Walkenaer, and .

Kirby began planning his "Introduction to Entomology", a celebrated title, in 1808. This was the practical result of a friendship formed in 1805 with William Spence, of Hull, and appeared in four volumes between 1815 and 1826. Much of the work fell to Kirby owing to Spence's ill health. It reached its seventh edition in 1856. In 1830 he was invited to write one of the "", his subject being "The History, Habits, and Instincts of Animals" (2 vols., 1835).

With and J.E. Gray, Kirby prepared the natural history supplement for Captain Parry's 1819-1820 expedition to seek the : his work formed the insect section of the "Account of the Animals seen by the late Northern Expedition while within the Arctic Circle" 1821. J.D. Hooker established his contact with Dr Richardson to involve him in the publication of findings from Sir 's 1st and 2nd expeditions, the insect section in the "Fauna Boreali-Americana" in 1837.

In 1815 Kirby took his MA with the intention of applying for the Professorship of Botany at the when it should become vacant. A dispute arose as to whether this appointment lay in the grant of the Senate or the Crown. Kirby's Tory political complexion proved a stumbling-block, and in the event was appointed.

In 1827 Kirby assisted Mr Denny in arranging the natural history specimens at Museum. In 1832 he helped to establish an early museum in Ipswich under the aegis of the town's Literary Institute, and presented a herbarium and a group of fossils. With Spence he helped to found the in 1833, with John Westwood as Secretary, and became its Honorary President for life. On that occasion he presented his own cabinet of insects, collected over more than forty years, which contained many of the specimens figured in his papers.

Kirby was the original President of the , 1847-50, fulfilling a project which he had advocated since 1791, and appeared with and others at the opening ceremony. The attached lithograph by T.H. Maguire was copied from the oil portrait by F.H. Bischoff commissioned for and still displayed in the Museum. Professor Henslow succeeded him in this office.

Besides the books already mentioned he was the author of many papers in the Transactions of the , the and other periodicals; "Strictures on Sir James Smith's Hypothesis respecting the Lilies of the Field of our Saviour and the Acanthus of Virgil" (1819) and "Seven Sermons on our Lords Temptations" (1829). His "Life" by the Rev. John Freeman contains an extensive list of his works.
* W. Kirby, "Monographia Apum Angliae", 2 vols., 8vo (1802).
* W. Kirby and W. Spence, "Introduction to Entomology", 4 vols (1815-1826).
* W. Kirby, "The History, Habits and Instincts of Animals", 2 vols (Bridgwater Treatises) (1835).
* A century of insects, including several new genera described from his cabinet. "Trans. Linn. Soc. Lond." 12: 375-453 (1818).
* A description of several new species of insects collected in New Holland by Robert Brown, Esq. "Trans. Linn. Soc. Lond." 12: 454-482 (1818).
* A description of some coleopterous insects in the collection of the Rev. F.W. Hope, F.L.S. "Zoological Journal" 3: 520-525 (1828).
* "The Insects" in J. Richardson, "Fauna Boreali-Americana; or the Zoology of the Northern Parts of British America: Containing Descriptions of the Objects of Natural History Collected on the Late NorthernLand Expeditions, under Command of Captain , R.N". Josiah Fletcher, Norwich. Vol. 4, 377 pp.(Norwich, Josiah Fletcher, 1837).

* Image Source: "Portraits of the Honorary Members of the " (Portfolio of 60 lithographs by T.H. Maguire) (George Ransome, Ipswich, 1846-1852).
* Image Source Original drawing by William Spence. Pasted into 's copy of Volume 1 of the Transactions of the Entomological Society of London. .