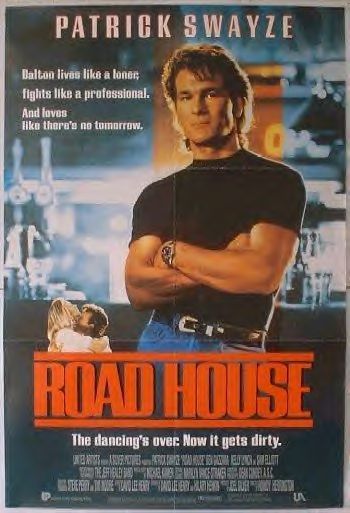 "Road House" is a 1989 film directed by and starring as the top bouncer at a seedy roadside bar. (It is not related to the 1948 movie).

James Dalton () is a professional "cooler" (i.e. head bouncer) with a mysterious past who is lured away from his current job to work at the Double Deuce in . Dalton has a degree in philosophy and believes in "being nice". In the course of cleaning up the violent nightclub, he dismisses several unruly employees including a relative of Brad Wesley (), a local businessman who wields a powerful influence over the town.

After a scrape with Wesley's henchmen, Dalton visits the hospital where he meets Dr. Elizabeth Clay (). The doctor and Dalton strike up a friendship which leads to two of them . Unfortunately, Clay, known to Dalton as "Doc," happens to be Wesley's ex-girlfriend.

Wesley calls Dalton to his home attempting to make peace with him. Wesley offers Dalton a chance to come work for him. When Dalton refuses, Wesley begins an assault on Dalton's friends in town and cuts off deliveries to the Double Deuce. Dalton's mentor, aging cooler Wade Garrett (), arrives in town and helps Dalton defend a shipment of liquor from Wesley's men. Upon his arrival, Garrett is treated with reverence by his fellow bouncers, and sticks around to help Dalton protect the Double Deuce from Wesley and his goons. Garrett gives Dalton fatherly advice, and their conversations, as well as interactions, reveal that Dalton considers Wade his most trusted friend. Later, Wade tries to convince Dalton to leave town, but Dalton is determined to stay.

Wesley sends several more henchmen to attack Dalton, but Dalton ultimately emerges victorious each time; when Dalton is attacked at the home he is renting, he battles the attacker, Jimmy, one of Wesley's best and most sadistic fighters, and ultimately, Dalton kills Jimmy by tearing his throat out, much to the disgust of Clay. Returning to the Double Deuce after receiving a threatening phone call from Brad Wesley, Dalton finds Wade's body stabbed to death. Enraged, Dalton sneaks into Wesley's compound where he takes out the remaining members of Wesley's gang.

Dalton finds Wesley and the two fight until Dalton pins Wesley on the ground. Staring down at Wesley, Dalton sees the error of his own violent ways; he turns his back, giving Wesley the opportunity to attack again. Doc shows up just in time to watch as the townsfolk Wesley has bullied over the years come to Dalton's defense and shoot Wesley dead.

The soundtrack for "Road House" featured Canadian guitarist , whose band was featured in the film as the house band for the Double Deuce. The film's score was composed by .

A sequel, "", was released directly to DVD in July 2006. Set many years later and telling the story of Dalton's adult son, it featured no one from the original cast and only a few references to Dalton (who was shot dead before the movie took place). At the same time "Road House 2" was released, the original film was reissued in a deluxe edition featuring, among other features, separate audio commentary tracks by director Rowdy Herrington, and , which the duo had expressed an interest in during the introduction of the tenth anniversary DVD. [ [http://www.whatdvd.net/FilmReview.asp?FilmReview=937 DVD review] ]

In an off-Broadway musical production of "Road House" was staged as a campy comedy by , as seen by its full title of "Road House: The Stage Version Of The Cinema Classic That Starred Patrick Swayze, Except This One Stars From The 80’s Cult Classic “” Wearing A Blonde Mullet Wig". [ [http://eljallartsannex.com/Road%20House.htm Road House ] ] [ [http://theater.about.com/cs/offbroadway/fr/roadhouse.htm Roadhouse Review ] ]

"Road House" has subsequently been parodied by Mike Nelson courtesy of . Fact|date=July 2008