The Blackening is the sixth album by American heavy metal band Machine Head. Released on March 27, 2007 in the U.S., The Blackening sold 16,000 units in its first week, and became Machine Head's second highest charting release at number 54 on the Billboard 200, and charted in the Top 20 throughout many countries in the rest of the world. The album has been certified silver by the BPI for sales in the UK in excess of 60,000 copies.[1]

The album's first single, "Aesthetics of Hate", is a retaliation to an article written by William Grim for the website Iconoclast. Titled "Aesthetics Of Hate: R.I.P. Dimebag Abbott, & Good Riddance", the article praised the murder of musician Dimebag Darrell, while he was performing with the band Damageplan on December 8, 2004. Machine Head frontman Robb Flynn said the song was written as a "fuck you" to Grim and tribute to Dimebag. The song received a Grammy Award nomination for "Best Metal Performance" at the 50th Grammy Awards. The text in the mirror of the album's cover reads "the mirror which flatters not." The song "Beautiful Mourning" has also been featured in the video game Guitar Hero: Metallica as a playable song.

The inaugural song written for Machine Head's follow up to their 2004 release Through the Ashes of Empires was entitled "Godfather 4". This was in reference to a guitar riff in the song which vocalist Robert Flynn felt had "a Godfather type vibe". The song was shelved, although the riff resurfaced in a b-side.[2] "Slanderous" was the first song finished that was in the final track listing. By February 2005, Machine Head had penned rough versions of "Beautiful Mourning" and "Aesthetics of Hate".[2]

A November 2005 demo contained thirteen songs, which included rough versions of "Aesthetics of Hate" and "Halo". "Aesthetics of Hate" contained what Flynn described as a "totally fucking lame 'Angel of Death' rip off. I hated it every time we played it so I was glad to see that part go!"[2] In mid August 2006, Machine Head announced that the title of their sixth studio effort would be The Blackening.[3] Flynn and drummer Dave McClain spent August 18 and 19 jamming together, fine tuning songs chosen for the album and performing pre-production.[4] Phil Demmel resumed lead guitar duties and Adam Duce returned as bassist.

Machine Head entered Sharkbite Studios in Oakland, California on August 21 to begin recording The Blackening, with Flynn assuming production duties for the second time. From twenty six written songs, the selection was whittled down to eight.[4] McClain completed the drum tracks to six of the eight tracks on August 25, followed by the remaining two the next day.[5] Tracking concluded on November 16, 2006.[6]

The band was surprised at the length of "A Farewell to Arms" and "Clenching the Fists of Dissent" running over ten minutes, and wondered if their fans would "be able to get their heads around" what the band was doing. Record company Roadrunner Records hesitated the band's decision to open the album with a ten and a half minute song ("Clenching the Fists of Dissent"), and asked the band questions similar to "Are you sure you don’t want to get into something a little more direct?"[7] The band disregarded the comment and believed the song set the tone musically for the remainder of the album.[7]

Flynn said "Clenching the Fists of Dissent" and "Wolves" were the most difficult songs to construct.[8] For "Clenching", he attributed the difficulty to the amount of tracks; the introduction of the song has 90, including multiple three-part harmony with two guitars, 20 tracks of snare drum, four tracks of kick drum, and military marching cymbals. The song continues with five electric guitars, three acoustic guitars and two bass guitars. Another song that Flynn described as difficult was "Wolves"; "it's all got to be super tight; there were so many riffs that had to be just locked on down picking".[8] Mark Keaton provided audio engineering, and Colin Richardson mixed the record in London.[8]

Flynn believes the band was naive about the length of songs, and was unconcerned if they would be suitable for radio or MTV, as the band purposely did not want to receive airplay. "Now I Lay Thee Down" has a chorus Flynn describes as "poppy" and added "fucked up lyrics" about one person killing another, and then committing suicide.[9] This was to make the song not suitable for airplay as the band wanted to make a "dark epic record".[9]

Lyrical themes explored on The Blackening include love, war, organized religion, anger in society and Machine Head's "winner take all" spirit. The album's first single, "Aesthetics of Hate", is a retaliation that captures the band's anger towards an article written by William Grim for the conservative web site Iconoclast. Titled "Aesthetics of Hate: R.I.P. Dimebag Abbott, & Good Riddance", the article praised the murder of Dimebag Darrell by Nathan Gale, while Darrell was performing with Damageplan on December 8, 2004. Grim wrote Darrell was "an ignorant, barbaric, untalented possessor of a guitar" who looks "more simian than human" and is "part of a generation that has confused sputum with art and involuntary reflex actions with emotion".[10] After reading the article, Flynn was furious and wrote the song to send a message to Grim implying "fuck you", and pay tribute to Dimebag. He created a post on the band's message board soon after the event describing his friendship with Dimebag.[10]

"What would YOU know about love or values? What would YOU know about giving to the world? All that you know is teaching prejudice, and your heart is as black as the 'ignorant, filthy, and hideously ugly, heavy metal fans' you try and paint in your twisted, fictitious ramblings. It's because of people like YOU, that there are Nathan Gale's in this world, NOT the Dimebags and metal musicians who work to unite people through music".[10]
—Robb Flynn speaks about William Grim who wrote an article praising Dimebag Darrell's murder.

The songs "Clenching the Fists of Dissent", "A Farewell To Arms", and "Halo" deal with politics, the war in Iraq and organized religion, respectively. The band wrote the lyrics about the Iraq war after conducting research and found that "a lot of stuff does not add up",[8] according to Flynn, which angered the band. Machine Head's debut album, Burn My Eyes, featured a similar song titled "A Thousand Lies" which dealt with the Gulf War. "Slanderous" deals with hate that still exists throughout society and "Wolves" addresses the band's competitive "winner takes all" spirit.[11] "Now I Lay Thee Down" features a Romeo and Juliet-esque love story about one man killing another man, and then killing himself. The song relates to the William Shakespeare play, Romeo & Juliet, where at the end of the story, two lovers kill themselves because they assume that their lover is dead. The original lyrics to the chorus of the song were considered "poppy" by Flynn and his band-mates so they intentionally changed them into the lyrics they are now so they wouldn't get radio play.

The Blackening was met with positive critical reviews in the metal community. Blabbermouth.net reviewer Don Kaye awarded the album an almost perfect score of 9.5 out of 10, saying: "one of the purest, finest, most powerful expressions of modern heavy metal released".[16] Kaye praised the guitar work of Flynn and Demmel on the tracks "Beautiful Mourning" and "Aesthetics of Hate", and thought the band members surpassed their musical ability in an "intense and dynamic way".[16]

Thom Jurek of Allmusic described the album as "an over the top rage and pummelfest with all the qualities that earned the group its enormous fan base by touring and recording" and that the thrash metal element "rivals Slayer at their best".[17] Rock Sound magazine reviewer Eleanor Goodman awarded the album 9 out of 10, praising the first two minutes of the opening song, "Clenching the Fists of Dissent", as "a full-on old-skool thrash attack".[18]

Not all reviews were positive. J.D. Considine of Blender felt the lyrics were "cribbed from comic books".[19] Rolling Stone reviewer Andy Greene and James Jam of NME responded to the album negatively. Greene was displeased with the length of songs running over nine minutes comparing them to "three Load-era Metallica outtakes strung together".[20] Jam described the album as "no return to form" and that it made you want to "dig out their 1994 debut album, Burn My Eyes".[21]

"Aesthetics of Hate" received a Grammy Award nomination for "Best Metal Performance" at the 50th Grammy Awards, which took place on February 12, 2008, though heavily favored, they controversially lost to eventual winners Slayer who had won the previous year for the same album. Other nominees in the category were King Diamond, Shadows Fall, and As I Lay Dying.[22] At the fifth annual Metal Hammer Golden Gods awards and at the Kerrang! Awards in 2007, The Blackening won best album over albums by Slayer and Lamb of God.[23]

3 years after the release of The Blackening, Machine Head wrapped their touring cycle for the album, finishing in Sydney, Australia on the 28th March. In February 2010, The Blackening was awarded the Album of the Decade award from Metal Hammer Magazine.[24]

On October 8th 2011 the abum was named Roadrunner Records "Album of the Century". 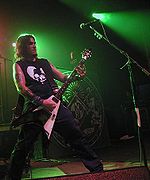 Flynn performing at a concert promoting The Blackening

The Blackening was leaked on to the Internet two weeks before its release by an American journalist who received an advanced copy. Demmel thought it unfortunate, but that it created a "pre-buzz", as did Flynn who thought the buzz was nothing like the band had before; "There’s internet street buzz vs. record company hype and if the hype matches up to the street buzz, then you’re seeing a lot of bands selling a lot of records in the first week".[25] The Blackening became Machine Head's highest charting release in the United States, where it entered the Top Rock albums at No. 9, and the Billboard 200 at No. 54, (their highest charting and first week ever), with sales of almost 16,000 copies. This improved on the band's 2004 release, Through the Ashes of Empires, which sold 12,000 units in its first week, and entered the Billboard 200 at No. 88.

The album did exceptionally well overseas where it entered the Mainstream Top 20 in the German and Belgium charts at No. 12, No. 14 in Australia, No. 16 in the United Kingdom and No. 19 in Sweden. Charting positions below the Top 20 consisted of Ireland at No. 23, No. 29 in the Netherlands, No. 34 in France and No. 55 in Italy.[26] The Blackening sold more copies in two weeks than Through the Ashes of Empires sold in three years.[27]

The artwork for The Blackening was designed by Robb Flynn, longtime Machine Head collaborator Paul Brown, and Deanna Alcorn. Based on a metal carving in the 16th century, these carvings were used to scare people about going to Hell and for propaganda purposes. It features a skeleton on a throne that is standing on top of the world, and the words "The mirror which flatters not." Flynn thought "this whole record is like holding up a mirror to ourselves. It's talking about things that are going on now, but it's not necessarily specific to this time."[28]

Three special editions of The Blackening were released: a two-LP gatefold vinyl, a two-disc special edition packaged in a silver foil-enhanced slipcase, with a bonus Metallica cover added to the end of the album. The second disc was a DVD featuring a video entitled The Making of The Blackening, and a 2006 tour diary of the Sounds of the Underground Tour. Both of these versions were released in 2007.[citation needed]

The third version, released in 2008, was a 3-disc set which came with the original album, a CD featuring various covers the band had recorded in the past, demos and other unreleased material and a DVD which featured various live performances of the band at festivals, the Burn My Eyes 10th anniversary show and music videos from The Blackening accompanied by their "making's of".[citation needed]