Mona "Mo" Best (3 January 1924 – 9 September 1988) was born in India and is best known as the mother of Pete Best (b. 24 November 1941), who was an early member of The Beatles. Mona also had two other sons, Rory (born 1945) and Vincent "Roag" Best (born 1962). It was later confirmed that Roag's father was The Beatles' associate Neil Aspinall,[1] although he was not registered as the father on Roag's birth certificate.

After moving to Liverpool from India, the Best family claim that Mona pawned all of her jewellery in 1954, and used the money to place a 33–1 bet on a horse named "Never Say Die", and used her winnings to buy a house in 1957. Mona later opened The Casbah Coffee Club in the cellar of the house as a venue for Rock 'n' Roll music. It was planned as a members-only club for her sons and their friends. The club was often referred to as The Casbah Club, or The Casbah.

The Quarrymen—John Lennon, Paul McCartney, George Harrison and Ken Brown—frequently played at The Casbah instead of the The Cavern Club, which had a jazz-only policy at that time. The Casbah Club cellar—with its original decoration—still exists. In 2006, the property was accorded a Grade II Heritage listing. Mona died in 1988, after a heart attack following a long illness.

Alice Mona Shaw was born on 3 January 1924, in Delhi, India, to Thomas (an Irish major) and Mary Shaw.[2] She was the youngest of four children: Brian, Patrick and Aileen.[3] Her first son, Randolph Peter (Pete Best), was born on 24 November 1941—his biological father was marine engineer Donald Peter Scanland, who subsequently died during World War II.[4] Mona was training with the Red Cross when she met Johnny Best, who came from a family of sports promoters in Liverpool that once owned and ran the Liverpool Stadium.[5] At the time of their meeting, Best was a commissioned officer serving as a Physical Training Instructor in India, and was the British Army's middleweight boxing champion.[6] After their marriage on 7 March 1944, at St. Thomas's Cathedral, Bombay, the Bests had one child: Rory Best (b. January 1945). In late 1945, the family sailed for four weeks to Liverpool on the Georgic, which was the last troop ship to leave India, carrying single and married ranks who had previously been a part of General Sir William Slim's forces in southeast Asia. The ship docked in Liverpool on 25 December 1945.[7]

Being a part of Best's family meant Mona was accorded respect on Merseyside, which included meeting well-known sports personalities of the time and receiving preferential treatment when booking a table in a restaurant, or a seat in the theatre.[8] The Bests lived for a short time at the Best family's large home in West Derby, which was called Ellerslie, but Mona fell out with John Best's sister, Edna, who resented her brother's choice of wife.[9] The family then moved to a small flat on Cases Street, Liverpool (above Ma Edgerton's public house) but Mona was always looking for a large house—as she had been used to in India—instead of a smaller semi-detached house, which were prevalent in the area. After moving to a three-bedroom house in Princess Drive, Mona persuaded her parents, Thomas and Mary Shaw, to leave India and live with them in Liverpool.[10][11]

After moving to 17 Queenscourt Road in 1948—where the Bests lived for nine years—Rory saw a large Victorian house for sale at 8 Hayman's Green in 1954, and told his mother about it.[12] The Best family claim that Mona then pawned all her jewellery and placed a bet on a horse that was ridden by Lester Piggott in the 1954 Epsom Derby, called "Never Say Die", which won at 33–1, and used her winnings to buy the house in 1957.[13] Note: to place the bet, Mona would have had to travel more than 220 miles from Liverpool to Epsom (as bets were only allowed at race tracks at the time) or place the bet with an illegal bookmaker in Liverpool.[14] 8 Hayman's Green had previously been owned by the West Derby Conservative Club, and was unlike many other family houses in Liverpool, as the house (built around 1860) was set back from the road, had 15 bedrooms and an acre of land.[15] All the rooms were painted dark green or brown, and the garden was totally overgrown.[16][17][18] Mona decorated the living room in an Oriental style, which reflected her own upbringing in India.[19] She had previously tried to interest her husband in other houses, including a Formby lighthouse, a windmill in St. Helens and a circular house in Southport, which Best disliked and rejected.[15]

During 1961–1962, Neil Aspinall became good friends with Pete and subsequently rented a room in the Bests' home. Aspinall became romantically involved with Mona, who was 17 years his senior. During this period, Aspinall fathered a child by Mona: Vincent "Roag" Best.[20] Roag was born in late July 1962, and just three weeks later, on 16 August 1962, the Beatles dismissed Pete.[21][22] Roag's birth certificate was registered on 31 August 1962, stating his name to be Vincent Rogue [sic] Best, and his father as being John Best.[21] Mona and Best had separated in the late 1950s or early 1960s.[23][24] 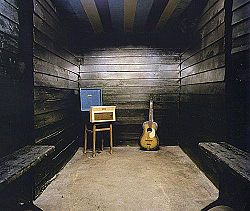 The music area of The Casbah Coffee Club as it looks today.

Mona came up with the idea of the club after watching a TV report about The 2i's Coffee Bar in London's Soho where several singers had been discovered. She decided to open The Casbah Coffee Club—which was located in her cellar—on 29 August 1959, for young people to meet and listen to the popular music of the day.[25] Mona charged half a crown annually for membership—to "keep out the rough elements"—and served soft drinks, snacks, cakes, and coffee from an espresso machine, which no other club had at that time.[24][26][27] The popular records of the day were played on a small Dansette record player, which amplified them through a speaker of 3 inches (76 mm).[28]

Mona had booked the Les Stewart Quartet to play the opening night with Harrison on guitar, but they cancelled the booking after Stewart and Brown had a quarrel. Stewart was angry that Brown had missed a rehearsal, because Brown was helping Mona to decorate the club.[16] As 300 membership cards had already been sold, Harrison said that he had two friends in a band called The Quarrymen who would play instead.[16] Lennon, McCartney, Stuart Sutcliffe and Harrison went to the club to arrange the booking, to which Mona agreed, but said she needed to finish painting the club first. All four took up brushes and helped Mona to finish painting the walls with spiders, dragons, rainbows, stars, and a beetle, but as Lennon was short-sighted, he mistook gloss for emulsion paint, which took a long time to dry in the dark, damp cellar. Cynthia Powell, later the wife of Lennon, painted a silhouette of him on the wall, which is also still there.[29][30]

The Quarrymen played a series of seven Saturday night concerts in The Casbah for 15 shillings each, starting on 29 August to October 1959, featuring Brown, Lennon, McCartney and Harrison, but without a drummer, or a PA system.[31][32] The opening night concert was attended by about 300 local teenagers, but as the cellar had no air-conditioning, and people were dancing, the temperature rose until it became hard to breathe.[20] As there was no amplification, Lennon later persuaded Mona to hire a young amateur guitar player called Harry to play a short set before The Quarrymen, but this was only so they could use his 40-Watt amplifier.[33] After the success of the first night, Mona gave The Quarrymen a residency, and paid the whole group £3 a night.[34] Every Saturday thereafter, queues lengthened onto the street, which was financially good for Mona, as she charged one shilling admission on top of the annual membership fee.[35]

Pete was studying at the Collegiate Grammar School when he decided he wanted to be in a music group, so Mona bought him a drum kit from Blackler's music store and Best formed his own band; The Black Jacks.[16][36][37] Chas Newby joined the group, as did Ken Brown, but only after he had left The Quarrymen.[32][38][39] The reason for Brown's exit from the group was that he turned up on the seventh Saturday night of The Quarrymen residency at The Casbah with the flu, so Mona ordered him upstairs to the Best's living room to rest. This caused a massive quarrel with the rest of the group when Mona came to pay them, as they wanted Brown's money to be shared amongst the three of them, as Brown had not played. Mona refused, so The Quarrymen angrily cancelled their residency and stormed out.[40] Colin Manley from The Remo Four was also given a booking to play in the club, which was the only venue that young amateur bands could play at the time.[34] Other groups like The Searchers and Gerry & The Pacemakers later played in the club.[41] The Black Jacks became the resident group at The Casbah, although The Quarrymen occasionally played there again and often visited.[20] It was in The Casbah Club that Lennon and McCartney convinced Sutcliffe to buy a Hofner President bass guitar and join The Quarrymen.[20]

Even though the membership list later spiralled to over a thousand, Mona closed the club on 24 June 1962, with The Beatles as the last group to perform.[42] In 2006, the Best's ex-coal cellar was given a "Grade II listed building status", after being recommended by English Heritage.[30] It has now been opened as a tourist attraction in Liverpool, along with McCartney and Lennon's previous homes.[43] 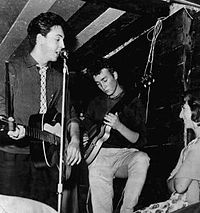 McCartney and Lennon on the opening night of The Casbah Coffee Club.

When Pete became a member of The Beatles, Mona repeatedly tried to get the group a lunchtime residency in The Cavern Club by talking to the owner, Ray McFall, but was turned down, as The Cavern had a jazz-only policy at the time.[44] Brian Epstein later wanted to manage the group, and Mona was asked for her advice, and although she had her own plans for the group, she concluded that Epstein would be good for them over time.[45] After The Beatles signed a management contract with Epstein, Mona did not relinquish her control over them, as they had been using her telephone to call agents, and frequently slept over in her living room between concerts.[19] She constantly harassed Epstein about the quality of their bookings, and his management of them, which led to Epstein never referring to her by name, but always calling her "that woman".[46] One musician commented that if Mona said it was a Sunday when it was Tuesday, one would be forced to agree with her.[19]

After Best, McCartney and Harrison were deported from Hamburg in November 1960, Mona made numerous phone calls to Hamburg to recover the group's equipment, which she eventually managed to do.[47][48][49] Mona wrote to Granada Television in 1961, in an attempt to get the group a television appearance on the programme called "People And Places", but was sent a letter telling her that they would contact her in the future.[50] After her son had been dismissed from The Beatles on 16 August 1962, Mona was later quoted by biographer Hunter Davies as saying:

In 1967, when The Beatles had to pose for the photograph for the Sgt. Pepper's Lonely Hearts Club Band cover, Lennon asked Mona if he could borrow the war medals her father had been given in India to wear for the photo session. Although still upset at the way her son was dismissed from The Beatles, Mona agreed, and the medals were then returned, along with a Cash Box trophy that is in the letter 'L' of THE BEATLES flower-sign on the cover.[51] Mona never opened another club, or engaged in another business venture, although she did have paying guests at her house, which she shared with her bed-ridden mother and her sons after she and Best parted.[52] Mona died of a heart attack 9 September 1988, after a long illness.[43]