An infant in a hall with a pacifier.

An infant with a teddy bear.

An infant or baby is the very young offspring of a human or other mammals and such. A newborn is an infant who is within hours, days, or up to a few weeks from birth. In medical contexts, newborn or neonate (from Latin, neonatus, newborn) refers to an infant in the first 28 days after birth.[1] The term "newborn" includes premature infants, postmature infants and full term newborns. The term infant is derived from the Latin word infans, meaning "unable to speak" or "speechless." It is typically applied to children between the ages of 1 month and 12 months; however, definitions vary between birth and 3 years of age. "Infant" is also a legal term referring to any child under the age of legal adulthood.[2] 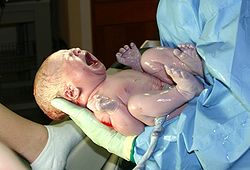 A newborn's shoulders and hips are narrow, the abdomen protrudes slightly, and the arms and legs are relatively short. In the developed world, the average birth weight of a full-term newborn is approximately 7 ½ lbs.(3.2 kg), and is typically in the range of 5.5–10 pounds (2.7–4.6 kg). The average total body length is 14–20 inches (35.6–50.8 cm), although premature newborns may be much smaller. The Apgar score is a measure of a newborn's transition from the uterus during the first minutes after birth.

A newborn's head is very large in proportion to the body, and the cranium is enormous relative to his or her face. While the adult human skull is about 1/8 of the total body length, the newborn's is about 1/4. At birth, many regions of the newborn's skull have not yet been converted to bone, leaving "soft spots" known as fontanels. The two largest are the diamond-shaped anterior fontanel, located at the top front portion of the head, and the smaller triangular-shaped posterior fontanel, which lies at the back of the head. Later in the child's life, these bones will fuse together in a natural process. A protein called noggin is responsible for the delay in an infant's skull fusion.[3]

During labour and birth, the infant's skull changes shape to fit through the birth canal, sometimes causing the child to be born with a misshapen or elongated head. It will usually return to normal on its own within a few days or weeks. Special exercises sometimes advised by physicians may assist the process.

Some newborns have a fine, downy body hair called lanugo. It may be particularly noticeable on the back, shoulders, forehead, ears and face of premature infants. Lanugo disappears within a few weeks. Infants may be born with full heads of hair; others, particularly white infants, may have very fine hair or may even be bald. Amongst fair-skinned parents, this fine hair may be blond, even if the parents are not. The scalp may also be temporarily bruised or swollen, especially in hairless newborns, and the area around the eyes may be puffy.

Newborns' digestive tracts, which of course have never been used prior to birth, are filled with a greenish-black, sticky material called meconium. This has the function of standing in for fecal material and allows the intestines to develop to the point where they can process milk immediately on birth. This material is passed by the child in the first few days.

Immediately after birth, a newborn's skin is often grayish to dusky blue in color. As soon as the newborn begins to breathe, usually within a minute or two, the skin's color reaches its normal tone. Newborns are wet, covered in streaks of blood, and coated with a white substance known as vernix caseosa, which is hypothesised to act as an antibacterial barrier. The newborn may also have Mongolian spots, various other birthmarks, or peeling skin, particularly on the wrists, hands, ankles, and feet.

A newborn's genitals are enlarged and reddened, with male infants having an unusually large scrotum. The breasts may also be enlarged, even in male infants. This is caused by naturally occurring maternal hormones and is a temporary condition. Females (and even males) may actually discharge milk from their nipples (sometimes called witch's milk), and/or a bloody or milky-like substance from the vagina. In either case, this is considered normal and will disappear in time.

Upon entry into the air-breathing world, without the nutrition and oxygenation via the umbilical cord, the newborn must begin to adjust to life outside the uterus. Newborns can feel all different sensations, but respond most enthusiastically to soft stroking, cuddling and caressing. Gentle rocking back and forth often calms a crying infant, as do massages and warm baths. Newborns may comfort themselves by sucking their thumb, or a pacifier. The need to suckle is instinctive (see suction in biology) and allows newborns to feed.

Newborn infants have unremarkable vision, being able to focus on objects only about 18 inches (45 cm) directly in front of their face. While this may not be much, it is all that is needed for the infant to look at the mother’s eyes or areola when breastfeeding. Depth perception does not develop until the infant is mobile. Generally, a newborn cries when wanting to feed. When a newborn is not sleeping, or feeding, or crying, he or she may spend a lot of time staring at random objects. Usually anything that is shiny, has sharp contrasting colors, or has complex patterns will catch an infant's eye. However, the newborn has a preference for looking at other human faces above all else. (see also: infant metaphysics and infant vision)

In utero, the infant can hear many internal noises, such as the mother's heartbeat, in addition to external noises including the human voice, music and most other sounds. Therefore, though a newborn's ears may have some catarrh and fluid, he or she can hear sound from before birth. Newborns usually respond more readily to a female voice over a male voice. This may explain why people will unknowingly raise the pitch of their voice when talking to newborns (this voice change is called motherese). The sound of other human voices, especially the mother's, can have a calming or soothing effect on the newborn. Conversely, loud or sudden noises will startle and scare them. Newborns have been shown to prefer sounds that were a regular feature of their prenatal environment, for example, the theme tune of a television programme their mother watched regularly.

Newborns can respond to differing tastes, including sweet, sour, bitter, and salty substances, with a preference toward sweetness. It has been shown that neonates show a preference for the smell of foods that their mother ate regularly.

Infants cry as a form of basic instinctive communication. A crying infant may be trying to express a variety of feelings including hunger, discomfort, overstimulation, boredom, wanting something, or loneliness.

Breastfeeding is the recommended method of feeding by all major infant health organizations.[4] If breastfeeding is not possible or desired, bottle feeding is done with expressed breast-milk or with infant formula. Infants are born with a sucking reflex allowing them to extract the milk from the nipples of the breasts or the nipple of the baby bottle, as well as an instinctive behavior known as rooting with which they seek out the nipple. Sometimes a wet nurse is hired to feed the infant, although this is rare, especially in developed countries.

As infants grow, food supplements are added. Many parents choose commercial, ready-made baby foods to supplement breast milk or formula for the child, while others adapt their usual meals for the dietary needs of their child. Whole cow's milk can be used at one year, but lower-fat milk should not be provided until the child is 2 to 3 years old.[5] Until they are toilet-trained, infants in industrialized countries wear diapers. Children need more sleep than adults—up to 18 hours for newborn babies, with a declining rate as the child ages. Until babies learn to walk, they are carried in the arms, held in slings or baby carriers, or transported in baby carriages or strollers. Most industrialized countries have laws requiring child safety seats for infants in motor vehicles.

This epidemiological indicator is recognized as a very important measure of the level of health care in a country because it is directly linked with the health status of infants, children, and pregnant women as well as access to medical care, socioeconomic conditions, and public health practices.[7][8]

An infant being immunized in Bangladesh

Attachment theory is primarily an evolutionary and ethological theory whereby the infant or child seeks proximity to a specified attachment figure in situations of alarm or distress for the purpose of survival.[9] The forming of attachments is considered to be the foundation of the infant/child's capacity to form and conduct relationships throughout life. Attachment is not the same as love and/or affection although they often go together. Attachment and attachment behaviors tend to develop between the age of 6 months and 3 years. Infants become attached to adults who are sensitive and responsive in social interactions with the infant, and who remain as consistent caregivers for some time. Parental responses lead to the development of patterns of attachment which in turn lead to 'internal working models' which will guide the individual's feelings, thoughts, and expectations in later relationships.[10] There are a number of attachment 'styles' namely 'secure', 'anxious-ambivalent', 'anxious-avoidant', (all 'organized') and 'disorganized', some of which are more problematic than others. A lack of attachment or a seriously disrupted capacity for attachment could potentially amount to serious disorders.

An infant of four months

Smile of a little baby

An infant of two months