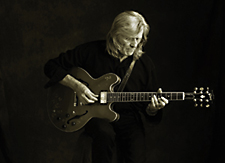 Henry McCullough (born ) is a , who has played in such bands as , 's Wings, and . Born in , , , Henry McCullough is a guitarist, vocalist and songwriter, and is the only Irishman to play the (backing ). He turns up in many different places as sideman or a performer in his own right. In 2008, he recorded "Poor Man's Moon", featuring the single "Too Late to Worry."

McCullough first came to prominence in the early 1960s as the teenage lead guitarist with The Skyrockets showband from . In 1964, with three other members of The Skyrockets, he left and formed a new showband fronted by n born vocalist Gene Chetty, which they named . McCullough then returned to his first love, , replacing Mike Cox in group The People. They built up a huge following all over Ireland, and when they were signed in 1967 by (former bassist with ) ’s management team, they changed the group’s name to Éire Apparent. Under Chandler’s guidance, they toured Britain on the same bill as groups such as , and . McCullough’s career took an unusual twist when he moved back to Ireland and joined what was primarily a folk group called . Under his influence, however, they soon began to mix folk and rock, and are often regarded as the innovators of the folk/rock genre.

Following a year in Ireland, returned to to work with Joe Cocker as a member of his backing group, The Grease Band (also playing on their eponymous LP minus Cocker.) With Cocker he toured the U.S. and performed at the Woodstock Festival. Paul McCartney asked McCullough to join his new band, Wings, alongside and Denny Sewell. His guitar solo on "My Love" is regarded by many as one of rock music’s greatest solos. Musical differences with McCartney, however, saw McCullough move on once again within a year. McCullough also appeared as lead guitarist on the original 1970 recording of and 's rock opera .

McCullough then did some session work, and played concerts with , , , , (whose "Kuschty Rye" is a McCullough live favourite), and . He also spent some time with progressive band Spooky Tooth. While recovering from an injury to his hand while visiting his family in 1980, McCullough decided to stay in Ireland. He began to sit in with some old friends, The , at their Sunday afternoon residency in The Lower Deck in , and soon decided to move back to Portstewart and put a new band together. He was joined by Percy Robinson on pedal steel guitar, Roe Butcher on bass and Liam Bradley on drums.

In 1998 McCullough went to , where he rehearsed with a band of Polish musicians for an upcoming tour. After the tour, they went into a recording studio and recorded a ‘live’ album which was released as "Blue Sunset". This was followed by a further successful Polish tour. On returning home, McCullough recorded and released "Failed Christian", a song that has since been covered by on his album, . In 1999, his beloved and invaluable cherry red 1963 Gibson ES335 guitar went missing during a flight from to London. To date, it has never been recovered.

McCullough continues to record and perform and has released some solo material, including "Belfast To Boston" (2001) and "Unfinished Business" (2003). The latter contains his 1998 single "Failed Christian", a powerful song best appreciated in live performance. Musically, he is bluesy and upbeat, with excursions into country and folk. McCullough gigs regularly in Northern Ireland and , playing with a solid backing band with obvious enthusiasm.

McCullough's spoken words "I don't know; I was really drunk at the time" can be heard on 's album "", at the end of the song "Money".

In 2007, covered "Failed Christian" on their album "Live from Nowhere, Vol. II".

In 2008 McCullough recorded "Poor Man's Moon" at Amberville Studios. The album is scheduled for release in Ireland only on September 5, 2008 and features new McCullough compositions and a number of songs co-written with poet Eamon Carr (of ) including the single “Too Late to Worry” released in August.