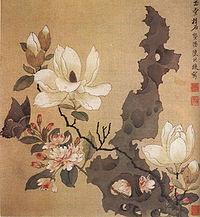 Leaf album painting of flowers, a butterfly, and a twisted rock sculpture, by Chen Hongshou (1598–1652).

During the Ming Dynasty (1368-1644), Chinese painting developed greatly from the achievements in painted art during the earlier Song Dynasty and Yuan Dynasty. The painting techniques which were invented and developed before the Ming period became classical during this period. More colours were used in painting during the Ming Dynasty. Seal brown became much more widely used, and even over-used during this period. Many new painting skills/techniques were innovated and developed, calligraphy was much more closely and perfectly combined with the art of painting. Chinese painting reached another climax in the mid-, late- Ming Dynasty. The painting was derived in a broad scale, many new schools were born, and many outstanding masters emerged. 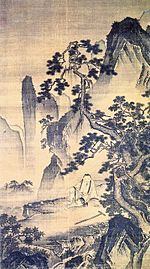 An anchorite, by Dai Jin, Zhejiang School of Painting

The painting schools of the Yuan Dynasty still remained in the early Ming period but quickly declined or changed their styles. The painting styles which were developed and matured during the Yuan period, still heavily influenced the early Ming painting. But new schools of painting were born and grew. Zhe School and the school which was supported by the royal court (Yuanti School) were the dominant schools during the early Ming period. The scholar-artist style of painting (Renwen Painting, in Chinese: 人文画) became more popular. Both these two new schools were heavily influenced by the traditions of both the Southern Song painting academy and the Yuan scholar-artist. 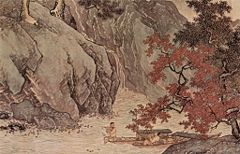 The Wumen painters they mainly inherited the tradition of Yuan scholar-artist style of painting (Renwen painting, 人文畫) and further developed this style into a peak. Wumen School was a large group of people, including teacher-student relationship (e.g. Shen Zhou was the teacher of Tang Yin, Wen Zhengming and so on) and family relationship (e.g. Wen family, including painters Wen Zhengming, Wen Jia (文嘉), Wen Boren (文伯仁) and so on). 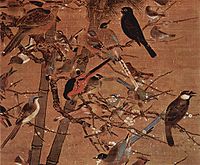 Xu Wei (徐渭) from Shaoxing, Zhejiang Province, he developed a lot the enjoyable style of Chinese painting (Xieyi painting, 寫意畫), especially the geart enjoyable style (Daxieyi, 大寫意). As an outstanding scholar, his accomplishments are mainly in the field of scholar-artist painting, especially in bird-and-flower painting.

The core place for this school was Hangzhou in Zhejiang Province. Jiangxia School from Hubei Province was a branch of this school. Dai Jin was the founder of this school, and he also kept a very close relationship with the Yuanti School. 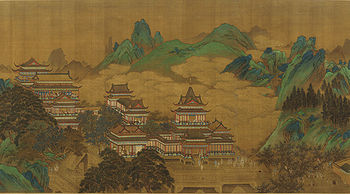 Peach Festival of the Queen Mother of the West, early 17th century, anonymous painter of the Ming Dynasty.

Lan Ying was the last master of this school, along with his family members, they formed a branch of Zhejiang School—Wulin School, because their family was located in Wulin (武林), a place in Hangzhou near the West Lake.

Most of the painters from this school, they are Zhejiang natives.

This school was organized and supported by the Ming central government, and it served for Ming royal court. The activity center for this school first was in Nanjing and then went to Beijing because of the change of Ming's capital. The

The primary location for this school was Suzhou, whose literary name was Wumen (吴门). Tang Yin, Wen Zhengming, Shenzhou and Qiu Ying, these four painters also were regarded as the "Big Four of the Ming Period" in Ming period painting.

The core place for this school was in the southern part of Jiangsu Province at that time, but now part of Shanghai. During the late Ming Dynasty, the Songjiang School rivaled Wumen, particularly in generating new theories of painting. [1]

This school is close to Songjiang School.

This school is similar to Songjiang School. 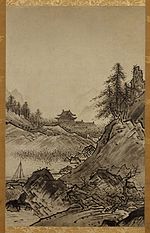 He resided in Tiantong Temple (Chinese: 天童寺) in Mingzhou (明州, now Ningbo), and also spent time in Beijing in the royal palace (Forbidden City). Before he went to Ming China, he studied Song and Yuan styles of painting (Chinese/Japanese: 宋元山水畫派) in Japan, and wanted to seek for the very origin of the Chinese painting and the real spirit inside of the Chinese art.

After returning to Japan, Sesshū Tōyō set up his school and further developed his own style of painting (漢畫派), a style mixed with the Japanese native traditional elements, and became the most celebrated master of painting in his era in Japan, continuing to heavily affect Japanese history to the present day.

Ming Dynasty painting provided the basis for early Qing Dynasty painting, from skills, style, subjects and theoretical basis. The concept of Northern and Southern Schools, developed by Dong Qichang in the late Ming period, influenced the more academic formal painters, such as Wang Yuanqi[2] well as providing an inspiration for daring originality for the "Individualist" painters, such as Kun Can and Shitao.[3]