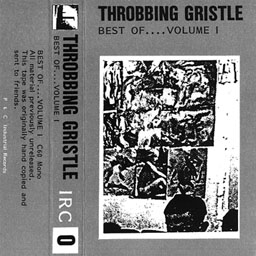 "Best Of.... Volume I" is a cassette release by industrial group . It is the first ever recorded material by Throbbing Gristle.

The liner notes state: "All material previously unreleased. This tape was originally hand copied and sent to friends".

On Genesis' website, he says this cassette was released in November-December of 1975, and sent to mail art friends. He distributed it with Cosey. This is fact is not true though since some of the material was recorded on July 30th of 1976 with Albrecht D. It was originally limited to 12 copies and sent out to mail art contacts. Throbbing Gristle later denied its existence simply to create confusion, which was why it was given the catalogue number IRC0. The cassette is a three-quarters full C90, incorrectly marked as a C60 on the tape.

The second last track on the tape is a recording of an American magician explaining a trick. The last track is a very distorted recording of two songs - "New Mama" starts, then is restarted and runs into "Look Out Joe", which are sequential tracks from Side 2 of Young's 1975 album "". Whether these non-TG tracks feature on the original master cassette, or only on the cassette owned by the individual responsible for uploading their copy to the internet (which turns up periodically on various sites/ networks, so far always with these tracks included), remains unclear.

Track 12 is actually the same exact version of "Scars Of E" that appeared on the , except that this version has a a few seconds cut off of the beginning, a fade-in, and more laughing at the end. Tracks 14, 15, 16, and 17 were taken from an hour long session on July 30th of 1976 with Albrecht D. "Very Friendly Pt. 1" was later released on "Best of Vol. II" with a shorter ending. Part 2 is just certain words and names from Part 1 being looped for 9 minutes. Different versions of Very Friendly can be found on the "New T.G." bootleg, "The First Annual Report", and other early IRC releases. Both versions of "We Hate You" can be found on the "Nothing Short Of A Total War" bootleg. The versions on that bootleg are in complete form.