The Oregon Spectator, was a newspaper published from 1846 to 1855 in Oregon City of what was first the Oregon Country and later the Oregon Territory of the United States. The Spectator was the first American newspaper to be published west of the Rocky Mountains and was the main paper of the region used by politicians for public debate of the leading topics of the day. The paper’s motto was Westward the Star of Empire takes its way.[1]

The Oregon Printing Association published the first issue on Thursday, February 5, 1846.[2] The Association consisted of William G. T'Vault, James W. Nesmith, John P. Brooks, George Abernethy, John H. Couch, Robert Newell, and John E. Long with T'Vault serving as president and the first editor of the paper.[2] For the first four years the owners did not allow sectarian political discussions in the paper.[1] The first edition was only four tabloid pages, printed on a hand press which was purchased in New York City and shipped by sailing vessel around Cape Horn. Henry A. G. Lee was the second editor of the paper with George Law Curry as the third editor taking over with the 18th edition.[2] Aaron E. Waite succeeded Curry as the last editor of the paper.[2] Oregon City's position being eclipsed by that of nearby Portland as the center of commerce and Salem for politics, the paper's fortunes faltered, and publication ceased in 1855. 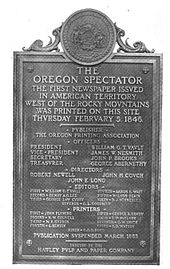 As the main newspaper in the region, the Spectator was often used to inform the populace of current topics, such as the debate over banning the manufacturing and sale of ardent spirits by law of the Provisional Legislature where Samuel Parker and James Douglas debated the proposed law.[2] Parker accused Douglas and the Hudson’s Bay Company of selling rum at Fort Vancouver with Douglas asserting the sovereignty of the HBC over its own people, but pledging to enforce any laws of the Provisional Government against all other parties.[2]

Under Curry’s editorship, the paper attacked Jesse Quinn Thornton when Thornton was sent to Washington, DC.[2] He had been sent as a representative of the government, but Curry accused Thornton of actually trying to secure favorable federal appointments for himself and his political allies.[2]