Andre the Giant Has a Posse

Andre the Giant Has a Posse

"André the Giant has a Posse" sticker on a stop sign

Andre the Giant Has a Posse is a street art and viral marketing campaign based on a design by Shepard Fairey created in 1989 in Providence, Rhode Island. Distributed by the skater community, the stickers featuring an image of André the Giant began showing up in many cities across the U.S.A.[citation needed] At the time Fairey declared the campaign to be "an experiment in phenomenology."[1] Over time the artwork has been reused in a number of ways and has become worldwide, following in the footsteps of World War II icon "Kilroy Was Here". At the same time, Fairey altered the work stylistically and semantically into the OBEY Giant.

Fairey and fellow RISD student Ryan Lesser, along with Blaize Blouin, Alfred Hawkins, and Mike Mongo, created paper and vinyl stickers and posters with an image of the wrestler André the Giant and the text "ANDRE THE GIANT HAS A POSSE 7' 4", 520 lb", ("7'4, 520lbs" being Andre The Giant's famously billed height and weight) as an in-joke directed at hip hop and skater subculture, and then began clandestinely (and somewhat fanatically) propagating and posting them in Providence, Rhode Island and the rest of the Eastern United States.

In an interview with Format magazine in 2008, Fairey said: "The Andre The Giant sticker was just a spontaneous, happy accident. I was teaching a friend how to make stencils in the summer of 1989, and I looked for a picture to use in the newspaper, and there just happened to be an ad for wrestling with Andre The Giant and I told him that he should make a stencil of it. He said ‘Nah, I’m not making a stencil of that, that’s stupid!” but I thought it was funny so I made the stencil and I made a few stickers and the group of guys I was hanging out with always called each other The Posse, so it said Andre The Giant Has A Posse, and it was sort of appropriated from hip-hop slang – Public Enemy, NWA and Ice-T were all using the word."

By the early 1990s, tens of thousands of paper and then vinyl stickers were photocopied and hand-silkscreened and put in visible places throughout the world.

"Andre The Giant Has a Posse" is also the title of a 1995 documentary short by Helen Stickler, which was the first documentary to feature Shepard Fairey and chronicle his influential street art campaign. The film screened worldwide, most notably in the 1997 Sundance Film Festival. In 2003 Village Voice film critic Ed Halter described the film as "legendary ... a canonical study of a Gen-X media manipulation. One of the keenest examinations of '90s underground culture."

Threat of a lawsuit from Titan Sports, Inc. in 1994[2] spurred Fairey to stop using the trademarked name André the Giant, and to create a more iconic image of the wrestler's face, now most often with the equally iconic branding OBEY. The "OBEY" slogan was not only a parody of propaganda, but also a direct homage to the "OBEY" signs found in the 1988 cult classic film, They Live, starring Roddy Piper. About "Obey," San Diego Union-Tribune art critic Robert L. Pincus says Fairey's work, "was a reaction against earlier political art, since it delivered no clear message. Still, “Obey” was suggestively antiauthoritarian."[3] "Following the example set by gallery art, some street art is more about the concept than the art," writes The Walrus (magazine) contributor Nick Mount. “'Fuck Bush' isn’t an aesthetic; it’s an ethic. Shepard Fairey’s Obey Giant stickers and Akay’s Akayism posters are clever children of Duchamp, ironic conceptual art."[4] 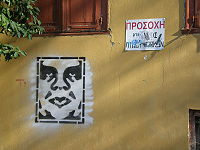 OBEY Giant image stenciled on a house in Athens, Greece

Appropriation and fair use

Fairey has come under criticism for appropriating others' artwork into his own while failing to provide attribution for the work used.[5][6] Austin, Texas graphic designer Baxter Orr did his own take on Fairey's work: a piece called Protect, with the iconic Obey Giant face covered by a SARS (respiratory) mask. He started selling prints, marked as his own work, through his website. On April 23, 2008, Orr received a signed cease-and-desist order from Fairey's attorneys, telling him to pull Protect from sale because they allege it violates Fairey's trademark. Fairey threatened to sue, calling the designer a "bottom feeder" and "parasite".[7]

Over time, Fairey's artistic imagery has evolved into a sometimes subtle, sometimes not, parody of a range of iconic styles, mostly a juxtaposition of popular political propagandas and multi-national commercialism. It usually bears the text OBEY Giant.

In addition to countless small stickers, OBEY Giant has been spread by stencil, murals, and large wheatpaste posters, covering public and private spaces from building faces and street sign backs, to commercial spaces such as billboards and bus stop posters. Furthermore, the popular "OBEY" slogan and stylized André The Giant face continues to be reproduced on products ranging from art and clothing to home accessories and decor, considerably expanding the impact of the campaign through iconology based on an allegiance to media and popular culture in the guise of counterculture.

The original "André the Giant has a posse" sticker format has been widely imitated for humorous intent. In these parody stickers, the image of André the Giant has been replaced with a similarly stylized black-and-white photo of some other person or character, along with the new figure's height and weight. For example, the parody sticker "Tattoo the Midget has a bigger posse" features the image of Hervé Villechaize portraying the character "Tattoo" from Fantasy Island. Colin Purrington's "Charles Darwin has a posse" stickers, featuring a black-and-white photo of Charles Darwin, promote the theory of evolution.[8] During the 2000 Presidential Campaign "Ralph Nader has a Posse"[9] showed up on college campuses. Numerous other parody stickers can be found featuring different pop culture figures, including the Homestar Runner character Strong Mad.[10] Peter Griffin in the TV show Family Guy is seen painting over the Sistine Chapel with the Obey Giant Icon in the season 4 episode "The Cleveland–Loretta Quagmire" (show creator Seth MacFarlane was classmates with Fairey at the Rhode Island School of Design).

These parody stickers are a further extension of the original "joke," and thus are most likely to be found in locations where the original André the Giant iconography is already familiar, such as SoHo, Manhattan, or South Street, Philadelphia. An unusual occurrence of a parody sticker was at the particle physics laboratory Fermilab where the director of the lab was the subject of the sticker.[11]

Tenacious D produced stickers with the slogan "Obey the D" and stylized images of their members, Jack Black, and Kyle Gass, over their initials. Guitar Hero II features a "Vlad has a Posse" sticker on various loading screens throughout the game. Electronic Frontier Foundation created a sticker with the words "Fair Use Has a Posse" on it.[12] "Joey Deacon Has A Posse" parody stencils have appeared in the UK.[13]

"Jack has a posse" stickers have appeared in the Gaslamp Quarter of San Diego, California in July 2011 during the Esri International User Conference held at the nearby San Diego Convention Center. The stickers carry an image U.S. businessman Jack Dangermond, founder of Esri.[14]