Mount Timpanogos, sometimes informally referred to as Timp, is the second highest mountain in Utah's Wasatch Range. Timpanogos rises to an elevation of 11,749 feet (3,582 m) above sea level in the Uinta National Forest (now part of the Wasatch-Cache National Forest). With 5,269 feet of topographic prominence, Timpanogos is the 47th-most prominent mountain in the contiguous United States.[1]

The mountain towers over Utah Valley, including the cities of Lehi, Provo, Orem, Pleasant Grove, American Fork, Lindon and others. The exposed portion of the mountain is made up entirely of limestone and dolomite from the Pennsylvanian period, and is about 300 million years old. Heavy winter snowfall is characteristic of this portion of the Wasatch Range, and avalanche activity is common in winter and spring.

The word Timpanogos comes from the Timpanogots tribe who lived in the surrounding valleys from AD 1400. The name translates as rock (tumpi-), and water mouth or canyon (panogos).[2] 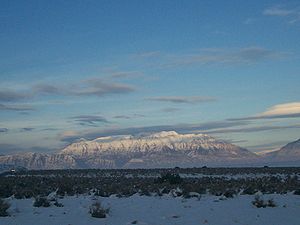 Mount Timpanogos is visible from much of Utah County.

Mount Timpanogos displays many examples of textbook glacial processes and provides stark evidence of the sculpting power of moving ice. Ice Age glaciers mantled the peak until relatively recently, and dramatically shaped the mountain into an Alpine tableau of knife-edge ridges and yawning, U-shaped amphitheaters. A remnant of these glaciers persists in the deeply recessed valley below the main summit. "Timp Glacier" is a rock-covered mass found on a long, north-facing slope, and is snow-covered for much of the year. It exhibits morphological characteristics found in both true glaciers and rock glaciers. Periodically-visible crevasses and sporadically audible flowing water below the rock-strewn surface hint at deeply-buried glacial ice, while other elements of the "glacier", such as an apparent lack of movement, suggest to some the jumbled assemblage may in fact be a rock glacier, composed of unsorted lithic aggregate cemented together in an icy matrix, flowing downhill. Furthermore, it is also possible that Timp Glacier may indeed be a small glacier completely obscured by talus and other debris: thus, a "rock covered glacier". The locally-unique ice is a relic of the region's formerly colder climate and has long been a major attraction to hikers and climbers on the mountain. Its precise classification remains the subject of spirited ongoing debate, whether "real" or not. 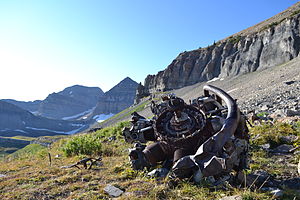 Radial Engine from 1955 B-25 crash site. Mount Timpanogos in background. 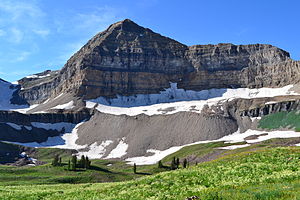 Mount Timpanogos is one of Utah's most popular hiking/climbing destinations and is climbed year round. Winter climbing requires advanced mountaineering ability. In spring, undercutting of deeply-drifted snow by streams creates a hazard that has proven fatal on more than one occasion. Climbers can fall through the undermined snow fifty feet or more into the icy stream underneath.

Although it is a 14-mile round-trip hike, with almost a mile of elevation gain, Timp's summit is one of the most-visited in the Rocky Mountains. There are two main trails to the top: the first starts at Aspen Grove with a trailhead elevation of 6,910 feet (2,106 meters), and the second starts at the Timpooneke campground in American Fork Canyon at 7,370 feet (2,185 meters). The two trails are nearly exactly the same length. Hikers on the trails climb through montane forest, subalpine and alpine zones. The hike is marked by waterfalls, conifers, rocky slopes and ridges, mountain goats, and a small lake, Emerald Lake, at 10,380 feet (3,164 m). A short diversion will lead hikers past a World War II bomber crash site. Other climbing routes exist on the mountain, but they are more technically demanding and require special skills and mountaineering gear. 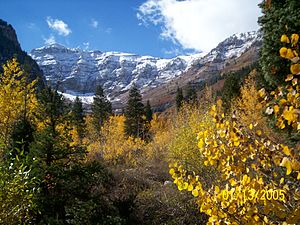 East side of Timpanogos as seen from the Alpine Loop. 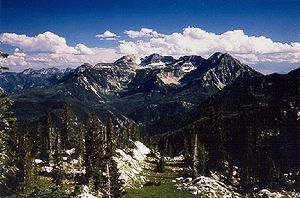 The east side of Timpanogos as seen from Silver Glance Lake.

Prior to 1970, an annual Provo event called the "Timp Hike" sent thousands of people up the mountain's slopes. From 1911 to 1970 this one-day event (which took place generally on the third or fourth weekend in July) attracted thousands of people to the mountain. It also created the need for infrastructure, such as the stone shelter built in 1959 near Emerald Lake and a smaller metal shack on the summit (this was used as an observation deck complete with brass rods etched with notches aligned with various landmarks). The hike caused environmental damage to the mountain, and was finally canceled to help preserve the delicate mountain ecosystem. Despite the presence of the existing structures, the mountain was designated a wilderness area by the U.S. Congress in 1984.

Since 1982 the Timpanogos Emergency Response Team ("TERT") has been established on the mountain on weekends to provide first aid, rescue and communication.[1].

The Timp Glacier is one of the major sources of injury or death to hikers on Timp, particularly when some attempt to "glissade" (or slide rapidly) down the snowfield's surface with the assistance of a shovel or other device to save time descending. There have been many cases of injuries from buried rocks under the snow as well. There have been numerous life flight rescues on the mountain, often caused by this activity. The frequency of these rescues, however, greatly diminished once TERT was established.

Viewed from the Heber Valley to the northeast, Mount Timpanogos resembles the profile of a sleeping woman. Various legends are told of an Indian maiden who died of grief after her lover was killed, with one version the basis for a ballet,[3] but there is no evidence that any of these are actual Native American myths. It is possible the romantic story was created in the early 1900s by Eugene Lusk "Timp" Roberts, a professor at Brigham Young University who initiated an annual hike and pageant intended to "sell Timpanogos to the world."[4]