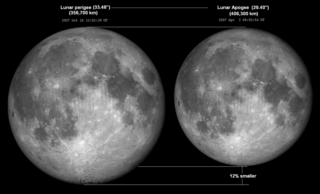 High-precision measurements of the lunar distance are made by measuring the time taken for light to travel between LIDAR stations on Earth and retroreflectors placed on the Moon.

The Moon is spiraling away from Earth at an average rate of 3.8 cm per year, as detected by the Lunar Laser Ranging Experiment.[2][3][4] By coincidence, the diameter of corner cubes in retroreflectors on the Moon is also 3.8 cm.[5][6]

The first person to measure the distance to the Moon was the 2nd-century-BCE astronomer and geographer Hipparchus, who used simple trigonometry. He was approximately 26,000 km off the actual distance, an error of about 6.8%.

The NASA Near Earth Object Catalog includes the distances of asteroids and comets measured in Lunar Distances.[7]

The Moon orbiting Earth, sizes and distances to scale.