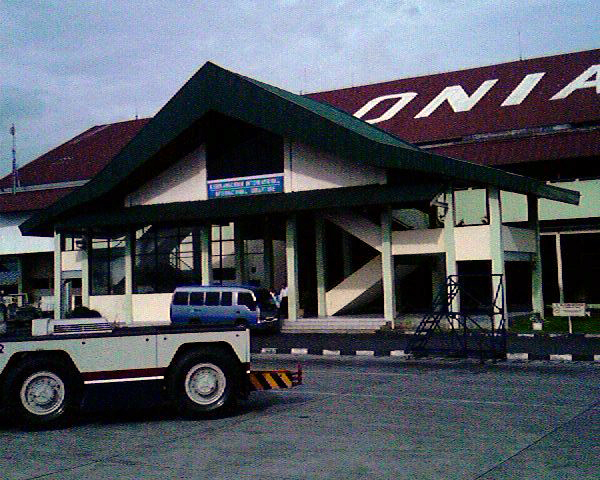 Polonia International Airport ( _id. Bandar Udara Internasional Polonia) airport codes|MES|WIMM (Popularly Polonia Airport, as in Indonesia, Bandara Polonia) is located in the city of , , about 5 km from the Central Business District. It is the first international airport in Medan. It serves flights to several Indonesian and Malaysian cities, along with a flight to . Flights to Indian cities are also planned. In terms of passenger numbers, Polonia is the fourth largest airport in Indonesia after Soekarno-Hatta, Juanda, and Ngurah Rai.

In 1879 the concession was handed over to "Deli Maatschappij" (Deli MIJ) or "NV Deli Maskapai". During that year also it was known that the Dutch KLM test pilot N. J. Thomassen à Thuessink van der Hoop was planning to fly on a in pioneering flight from the Netherlands.

Initially, the news have cooled down, until 1924, by the time in which it was too late to prepare a proper landing strip. As a result, van der Hoop, together with of the Army Aviation Department , and flight engineer , which was in the plane landed on a field used for horse-racing called Deli Renvereeniging and greeted by the Sultan of Deli,

After this first landing, the Assistant Resident of Eastern Sumatra urged the administration in Batavia to allocate the necessary funding to finish the airport at Polonia. In 1928 the airport was officially opened which was marked with the landing of six aircraft owned by , a subsidiary of KLM on a temporary hardened dirt runway. From 1930, KLM and KNILM started expanding its network to Medan. It was only in 1936 that the airport's 600 metre permanent runway was finished.

It is often said that its location in a residential district, the wealthy Polonia area, is due to a superstition that the loud noises from aircraft drive away malevolent spirits. This explains why the airport is located within the city, rather than outside it as with most airports.

Until recently, the airport consisted of an international and domestic terminal. A fire in the international arrivals area in 2006 caused damage to the airport, reducing the baggage reclaim area to a small section inside the terminal. On , the domestic terminal was damaged by another fire. [cite news |url=http://www.iht.com/articles/2007/12/02/travel/03sumatra.php|title=Fire destroys terminal at Indonesian airport|publisher=International Herald Tribune |accessdate=2007-12-23 |author=Reuters |archiveurl=http://www.webcitation.org/5UJQwV8BT |archivedate=2007-12-24] There were no injuries, and the separate international terminal was not affected.

The inappropriate location of the airport in the middle of the city has been implicated in four crashes:

The airport suffers from several problems, apart from being prone to major fires in its terminals, including having a 2,900 m runway with only 2,625 m of usable length, as well as suffering from the proximity of , location of the 1979 crash, as well as having the airport's location be the middle of the city, with the facility surrounded by houses.The airport also suffers from overcrowding, serving 4.5 million passengers annually in facilities designed to handle only 900,000 passengers.

These problems should be resolved by the construction of , scheduled to open in 2009, a replacement airport, whose construction had been promised 10 years ago, after the 1997 crash. Construction began .

The following airlines operate from Polonia International Airport (as of ) : [ [http://www.farecompare.com/flights/Medan-MES/city.html Destinations from Medan] at FareCompare.com]

Notes :
1 . flies to Jakarta-Cengkareng via Batam.

Past airlines and routes

Airlines still in operations with its terminated routes

Past airlines with its destinations