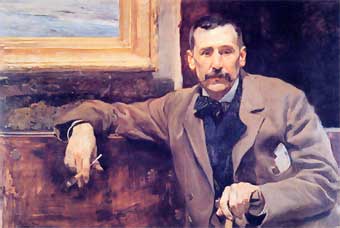 Benito Pérez Galdós (, &ndash; , ) was a Spanish realist . Considered second only to in stature, he was the greatest Spanish realist novelist. He was born in , , and, when nineteen years old, he moved to , where he spent most of his adult life. In Spain, most popular are the early works: the "" (46 volumes), outside Spain his "Novelas españolas contemporáneas" are more popular.

The early novels mix historical and fictional characters and are the result of documentary research. As in Balzac's novels, some characters reappear in different novels. They cover the time from 1805 to the end of the 19th century, providing glimpses of Pérez Galdós's liberal and anti-clerical views, which are developed in the contemporary novels. In "" (1876) a young liberal arrives to a stiflingly clerical town. In "" (1878) a young man regains his eye sight after a life of blindness and rejects his best friend Marianela for her ugliness. In "Miau" (1888) a pretentious family lose their livelihood when the father, an aged civil servant, loses his job because of a change in government, and eventually kills himself.

Pérez Galdós's masterpiece is "" (1886&ndash;1887), almost as long as "War and Peace" and concerns the fortunes of four characters: a young man-about-town, his wife, his lower-class mistress, and her husband. "Ángel Guerra" (1891) tells of an unbalanced man who attempts to win a devout and inaccessible woman, swinging from to in the process.

In 1886 then prime minister appointed him as the (absent) deputy for the town and district of , at the Madrid parliament; he never visited the place, but had a representative inform him of the status of the area, and felt a duty to represent its inhabitants appropriately. In 1897, Pérez Galdós was elected to the (Royal Spanish Academy). In 1907 he became a deputy for the Republican Party in the parliament. He went blind in 1912 but continued to dictate his books for the rest of his life. Pérez Galdós died at the age of 76. Shortly before his death, a statue in his honour was constructed in the , the most popular park in Madrid, financed solely by public donations.

Pérez Galdós was, and remains greatly popular in Spain, where he is considered the Spain's equal to Tolstoy. As recently as 1950, few of his works were available translated to English, although he has slowly become popular in the Anglophone world.

His plays are generally considered to be less successful than his novels, though "Realidad" (1892) is important in the history of realism in the Spanish theatre.