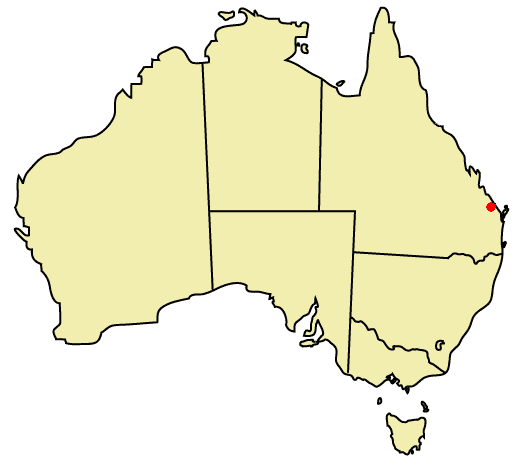 Bundaberg is a city in , . The city lies on the , approximately 385 kilometres north of the state capital, and 15 kilometres inland from the coast. Bundaberg is a major centre within Queensland's Wide Bay-Burnett region.

The city name is thought to be an artificial combination of "bunda", the Kabi Aboriginal word denoting important man and the German suffix "berg" indicating mountain.

Bundaberg has agreements with , and Settsu City, .

Bundaberg as a European township was founded by timbergetters John and Gavin Steuart and Lachlan Tripp in 1867. The first farmers in the area arrived soon after. Timber was the first established industry in Bundaberg. In 1868 a sawmill was erected on the Burnett River downstream from the Steuart and Watson holdings. The city was surveyed, laid out and named Bundaberg in 1870.

Experimental sugar cane growing in the district followed and a successful industry grew. The early sugar industry in Bundaberg was the result of the semi-slave labour carried out by Kanaka. Bundaberg was gazetted a town in 1902 and a city in 1913. The main street is called Bourbong Street — the result of a typographical error by the local daily paper, the News-Mail. The street had originally been named Bourbon Street.

Subtropical Bundaberg is dependent to a large extent on the local industry. Extensive fields are present throughout the district and value-adding operations, such as the milling and refinement of sugar, and its packaging and distribution, are located around the city. A local factory that manufactured sugar cane harvesters was closed down after it was taken over by the US Case New Holland. A bulk terminal for the export of sugar is located on the Burnett River east of Bundaberg. Another of the city's better-known exports is , which is made from the sugar cane by-product . Bundaberg is also home to beverage producer .

Commercial fruit and vegetable production is also prominent throughout the district, most notably es, s, s, s and s are grown in abundant quantities.

Tourism is an important industry to Queensland and Bundaberg is known as the 'Gateway to the '. The city lies near the southern end of the reef in proximity to Lady Elliot and s. The world famous Mon Repos is located on the coast just east of Bundaberg, as is the town of Bargara, an increasingly popular holiday and retirement destination.The northern bank of the Burnett River between the Matt Tallon and Burnett bridges is home to a colony of flying foxes. The bats leave the river at dusk and fan out all over the city to look for food.

Tours of the famous distillery are also popular with tourists. The Mystery Craters — mysterious water filled holes in the ground at South Kolan are also a tourist attraction.

Nearby beaches are popular with both locals and tourists. Moore Park, to the city's north, boasts 20 km of golden sandy beach. Beaches on the southern side of the Burnett River are (from north to south) The Oaks Beach, Mon Repos, Nielsen Park, Bargara Beach, Kellys Beach, Innes Park and Elliott Heads. Mon Repos attracts tourists. Kellys Beach is popular with families, particularly in summer months.

Bundaberg has a - with warm summers and cool winters. The mean daily maximum temperature is highest in January at 30.3 Celsius, and the mean daily minimum is lowest in July at 10.0 degrees CelsiusFact|date=February 2007. With the coldest temperature recorded in Bundaberg a mere 0.8 degrees Celsius and some inland areas of Bundaberg sometimes receive frosts. The mean annual rainfall is 1141.0 millimetres

Bundaberg is situated at the end of the (State Route 3), approximately 50 km east of its junction with the . Bundaberg is serviced by several passenger trains, including the Tilt Train and is approximately four and a half hours north of Brisbane by rail, a vast improvement on the days gone by when Bundaberg was an overnight journey away. ["The Bundaberg Mail and its Day Train Counterpart" Milne, Rod Australian Railway Historical Society Bulletin, May, 2000 pp165-171] Many long-distance services also pass through the city. Bundaberg is also served by , with flights to Brisbane and Lady Elliot Island. Adjacent to the airport is a campus of . The city is home to the Company, which designs and manufactures a range of small civil utility aircraft. is located 20 kilometres northeast of the city, at the mouth of the . The port is a destination for ships from Australia and overseas. It is predominantly used for shipping raw sugar and other goods related to that industry such as .

Current
* Jack Dempsey, (), State member for Bundaberg
* Paul Neville (), Federal member for HinklerFormer
* Prime Ministers and both represented Federal electorates that included Bundaberg, yet neither was from there.

Most major Australian sporting codes are played in Bundaberg, including; Rowing, , , , , , , , and .

Bucca Weir, east of Bundaberg, is home to the state rowing Championships every three years.

Bundaberg attracted national media attention in 2005 due to the alleged incompetence of Bundaberg Base Hospital surgical director (also known as "Doctor Death"), who was implicated in the deaths of up to 87 patients.

Bundaberg was also the location of another health-related disaster in January 1928, when 12 children died shortly after receiving injections of . At the time, the vaccine was created by the toxin-antitoxin, or "TAT" process, where diphtheria toxin was combined with antibodies from horses, which served to eliminate the toxicity of the toxin while leaving it intact enough to stimulate a long-lasting immunological response in the recipient. The vaccine, produced by the Commonwealth Serum Laboratories in Melbourne – world renowned for the quality of its work and products – was dispensed to many of the city's children from late 1927 without incident. However, because of fears that the usually included in the TAT preparation might render the vaccine ineffective, it had been left out of the batch supplied to Bundaberg. Unfortunately, the associated warning did not reach the local Medical Officer of Health, Dr Ewing Thomson, and he continued to re-use the batch of vaccine over a period of weeks, including immunising his own son. On 27 January 1928 Thomson inoculated 21 children aged from one to nine years old; over the following 36 hours 18 became very ill and 12 died. One family lost all three of their children in the disaster, and two more families watched two of their children die. Not surprisingly, the ‘Bundaberg tragedy’ or ‘serum tragedy’ – as it became known – created a media sensation both in Australia and around the world, causing a halt in diphtheria immunisation programs as far afield as and . Given the precarious nature of mass immunisation programs at the time, the Bundaberg tragedy also potentially compromised the careers of the Minister of Health, Dr Sir , and the Director General of Health, Dr John Cumpston.

Initial fears that the TAT process had failed to neutralize the diphtheria toxin in this instance were allayed by an Australian . This Commission, headed by the director of the Walter and Eliza Hall Institute, , found that the vaccine had become contaminated by "", probably from Thomson’s imperfect sterilisation technique. In the Bundaberg heat, these bacteria had multiplied in the vaccine, contaminating the serum with a massive quantity of a different toxin (see ). As a result of this finding, the Royal Commission issued a strong recommendation, adopted by all major manufacturers, that all vaccines packaged for administration of multiple doses should incorporate an antibacterial preservative. After testing of various compounds for toxicity and compatibility with the vaccine, the optimal preservative was determined to be , which, ironically, has now become controversial due to questions of its own toxicity. By 1931, CSL had replaced the TAT formulation with diphtheria anatoxin (or toxoid), which was claimed to be a safer product.

The Bundaberg tragedy set back the cause of mass immunisation in Australia by several years, and its consequences were remembered for decades in the town. Ewing Thomson stayed in Bundaberg for several years but then left, claiming that the fault lay with CSL’s inadequate labelling rather than his procedures. However, in addition to improving manufacturing of vaccines, the Royal Commission helped raise the profile of medical research in Australia and provided an important intellectual impetus for the future winning Macfarlane Burnet, who had conducted key bacteriological work during the investigation.

*The 1989 film, "The Delinquents", starring was set and filmed in Bundaberg.

*The 1977 film, "The Mango Tree", was set and filmed in and around Bundaberg.