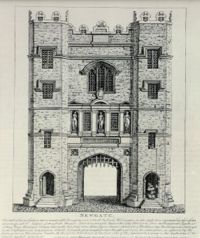 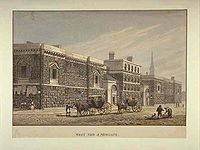 The second Newgate in a 19th-century print: A West View of Newgate by George Shepherd

A plan of Newgate Prison published in 1800

A cell and the galleries at Newgate in 1896

Newgate Prison was a prison in London, at the corner of Newgate Street and Old Bailey just inside the City of London. It was originally located at the site of a gate in the Roman London Wall. The gate/prison was rebuilt in the 12th century, and demolished in 1777. The prison was extended and rebuilt many times, and remained in use for over 700 years, from 1188 to 1902.

The first prison at Newgate was built in 1188 on the orders of Henry II. It was significantly enlarged in 1236, and the executors of Lord Mayor Richard Whittington were granted a license to renovate the prison in 1422. The prison was destroyed in the Great Fire of London in 1666, and was rebuilt in 1672, extending into new buildings on the south side of the street.

According to medieval statute, the prison was to be managed by two annually elected Sheriffs, who in turn would sublet the administration of the prison to private "gaolers," or "Keepers," for a price. These Keepers in turn were permitted to exact payment directly from the inmates, making the position one of the most profitable in London. Inevitably, the system offered incentives for the Keepers to exhibit cruelty to the prisoners, charging them for everything from entering the gaol to having their chains both put on and taken off. Among the most notorious Keepers in the Middle Ages were the 14th-century gaolers Edmund Lorimer, who was infamous for charging inmates four times the legal limit for the removal of irons, and Hugh De Croydon, who was eventually convicted of blackmailing prisoners in his care.

Over the centuries, Newgate was used for a number of purposes including imprisoning people awaiting execution, although it was not always secure: burglar Jack Sheppard escaped from the prison three times before he went to the gallows at Tyburn in 1724. Prison chaplain Paul Lorrain achieved some fame in the early 18th century for his sometimes dubious publication of Confessions of the condemned.

The old prison was demolished and replaced by a new building designed by George Dance the Younger between 1770 and 1777. He also designed the adjacent court-house. The new prison was attacked by rioting mobs during the Gordon Riots in 1780 and set on fire. Many prisoners died in the blaze,[1] and approximately 300 escaped to temporary freedom.

The prison was rebuilt two years later (in 1782), to an architecture terrible design intended to discourage law-breaking. The building was laid out around a central courtyard, and was divided into two sections: a "Common" area for poor prisoners and a "State area" for those able to afford more comfortable accommodation. Each section was further sub-divided to accommodate felons and debtors.

In 1783, the site of London's gallows was moved from Tyburn to Newgate. Public executions outside the prison – by this time, London's main prison – continued to draw large crowds. It was also possible to visit the prison by obtaining a permit from the Lord Mayor of the City of London or a sheriff. The condemned were kept in narrow sombre cells separated from Newgate Street by a thick wall and receiving only a dim light from the inner courtyard. The gallows were constructed outside a window in Newgate Street. Until the 20th century, future British executioners were trained at Newgate; one of the last was John Ellis in 1901.

During the early 19th century the prison attracted the attention of the social reformer Elizabeth Fry. She was particularly concerned at the conditions in which female prisoners (and their children) were held. After she presented evidence to the House of Commons improvements were made. In 1858, the interior was rebuilt with individual cells.

From 1868, public executions were discontinued and executions were carried out on gallows inside Newgate. Michael Barrett was the last man to be hanged in public outside Newgate Prison (and the last person to be publicly executed in Great Britain) on 26 May 1868.

The prison closed in 1902, and was demolished in 1904. The Central Criminal Court (also known as the Old Bailey after the street on which it stands) now stands upon its site.

The original door from a prison cell used to house St. Oliver Plunkett in 1681 is on display at St. Peter's Church in Drogheda, Ireland. The original iron gate leading to the gallows was used for decades in an alleyway in Buffalo, New York and is currently housed in that city at Canisius College. 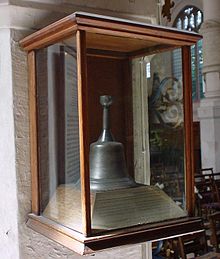 Newgate Execution bell; in the church of St Sepulchre-without-Newgate.

Other famous prisoners at Newgate include: